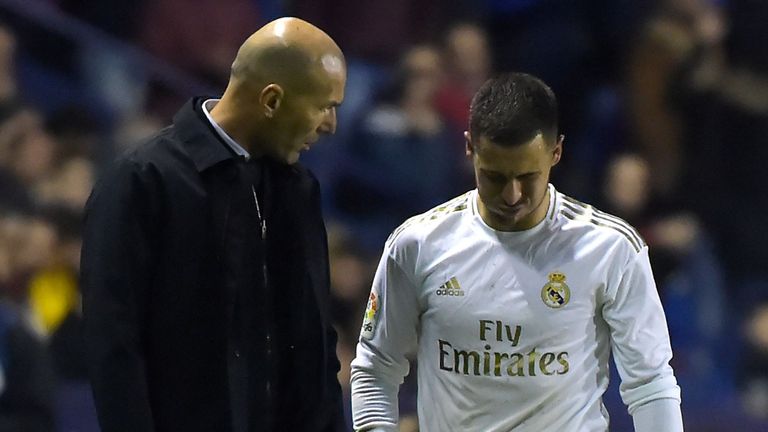 Eden Hazard is a doubt for Real Madrid’s Champions League clash at home to Manchester City on Wednesday after limping off during Saturday’s 1-0 defeat at Levante.

The Belgian star was playing in only his second match since returning from an ankle injury, which kept him out of action for almost three months.

“I think it’s a knock to the same area where he suffered his last injury and it does not look good,” Real head coach Zinedine Zidane told reporters.

There is also a question mark surrounding the fitness of Gareth Bale, who missed the defeat to Levante due to an illness.

Real’s best chance against Levante fell to Hazard, who scuffed the ball when he had a clear sight of goal early in the second half. He limped off shortly afterwards and was replaced by Vinicius Junior.

Levante forward Jose Luis Morales won the game with an unstoppable strike in the 79th minute.

Hazard’s injury comes at the beginning of a pivotal week in Real’s season.

They host Man City at the Bernabeu on Wednesday in the first leg of their Champions League last-16 tie.

Barcelona then travel to the Bernabeu on Saturday for El Clasico.