Eden Hazard will be hoping to break the hearts of those who once adored him when Real Madrid take on Chelsea in the Champions League. The Blues travel to Madrid to play the Spanish giants in the first leg of the semi-finals tomorrow knowing their former player could come back to haunt them.

Hazard has struggled with injuries and has made just 14 appearances in all competitions for Los Blancos this season.

The Belgian star has played for Real just twice since January 30, but after coming off the bench in the club’s 0-0 draw against Real Betis in La Liga on Saturday, he has been declared fit by his manager Zinedine Zidane.

“I don’t see Eden having any doubts. He looked very good on the field the other day,” Zidane said on Monday.

“That was the most important, not feeling anything from his old problems. Now he is good, and now to push on. We are happy to have him with us, he will bring a lot to the team.”

That means Hazard could feature against his former club, with Chelsea playing Real Madrid on Tuesday evening at the Estadio Alfredo Di Stefano.

JUST IN: Who is Daniel Ek? The Spotify billionaire who wants to buy Arsenal 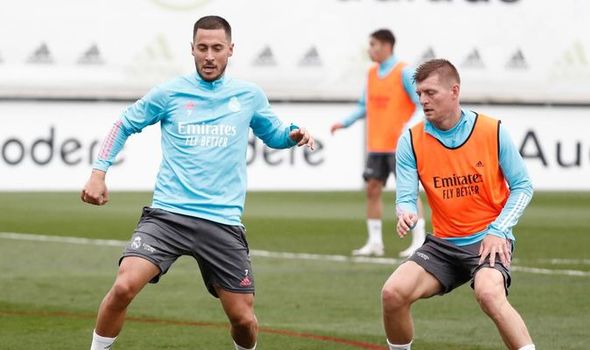 Hazard has been a flop since joining Real on a five-year contract from Chelsea for a fee that could rise to £130million in July 2019.

The 30-year-old has scored just four goals in 37 games so far, having been plagued by injuries and been stuck behind others in Zidane’s thoughts.

Hazard will be determined to change his fortunes with the Spanish giants and what better way to change perceptions than starring against your former side.

Chelsea have conceded just nine goals in 21 games under Thomas Tuchel – five of which came in one extraordinary defeat by West Brom earlier this month – so Hazard will have his work cut out.

However, he appears confident of his chances, judging by his Instagram activity. After posting a picture of himself from his 15-minute cameo against Real Betis accompanied by #HalaMadrid, he uploaded some videos to his Instagram story.

The clips showed Hazard looking sharp, going past his team-mates on the training pitch and finding the back of the net.

Should he get the opportunity to feature against the Blues tomorrow, Hazard can live up to a wish he explained back in 2019 after leaving Stamford Bridge for Madrid.

“Chelsea, and especially Chelsea fans, will always be special to me and next season I will look for your results first,” he said.

“I hope that we are drawn against each other in the Champions League and every season so we can meet again.”