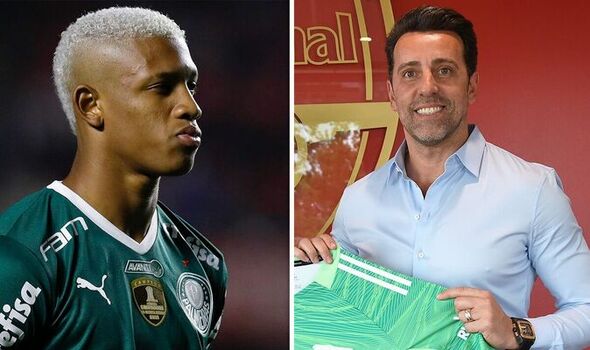 Edu committing his future to Arsenal could help convince several of Mikel Arteta’s transfer targets to join the club. The Gunners announced on Friday that Edu had been promoted to be their first-ever sporting director, ending speculation over his future. Express Sport looks at five transfer targets who could now join following the news.

Interest in Palmeiras defensive midfielder Danilo emerged in the summer. The Brazilian side were not willing to let him leave midway through their domestic season.

Edu’s knowledge of football in his home country has helped Arsenal sign the likes of Gabriel Martinelli and Marquinhos in the past. At the age of 21, Danilo could be viewed as a long-term successor to Thomas Partey.

Another Brazilian youngster Arsenal have been linked with is centre-back Renan. The 19-year-old only made his professional debut for Corinthians earlier this year.

However, he has become a regular in their side. Arteta is in the market for a left-footed defender to provide back-up to Gabriel and Edu could help land a deal for Renan.

It is not just Brazilian players that Edu can help lure to Arsenal. Transfer targets like to see stability at prospective new clubs and Edu committing his future provides just that.

Shakhtar Donetsk want up to £87million for Mudryk, which would break Arsenal’s transfer record. But he has made it clear a move to the Emirates would appeal to him, so Edu’s commitment can only help matters.

Both Arsenal and Tottenham are linked with a January move for Thuram. The Frenchman can play out wide and as a central striker and could be available for as little as £8.7m, due to his contract at Borussia Monchengladbach expiring at the end of the season.

Edu leaving could have created doubt in Thuram’s mind over the project at Arsenal. But his presence now could convince the versatile star to move to the red half of north London.

Tielemans is the only Premier League-based player on this list. The Belgian would have seen first hand how Arsenal have improved since Edu arrived at the club in 2019.

Tielemans first joined Leicester earlier in that same year. His contract is also up at the end of the season and has widely been reported to be interested in a move to the Gunners.