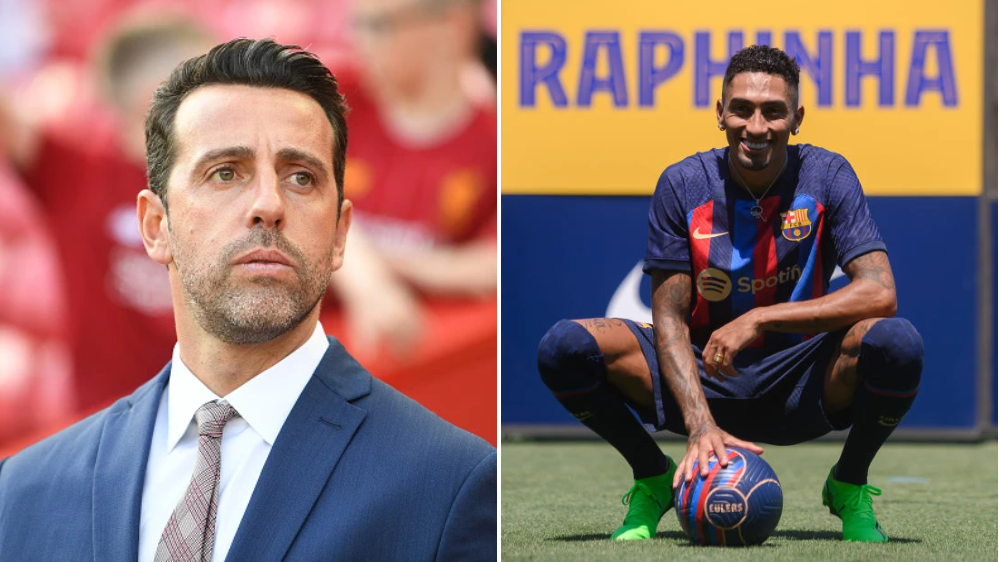 Edu has revealed how close Arsenal came to beating Barcelona to a deal for former Leeds United winger Raphinha.

The Gunners were strongly linked with a move for Raphinha before the Brazilian signed for Barcelona in a deal worth up to £55m.

The 25-year-old was unveiled to fans at the Catalan club’s training ground on Friday and scored in their pre-season friendly victory over Real Madrid yesterday.

Raphinha developed into one of Leeds’ most important players following his £17m move from Rennes in 2020, scoring 17 goals and providing 12 assists in 65 appearances and helping the club avoid relegation from the Premier League last season.

His form attracted interest from a number of clubs and Edu admits he spoke to the player’s agent and asked to be kept informed over any developments.

Asked how close Arsenal came to signing Raphinha from Leeds, Edu told Sky Sports: ‘People think we went in too deep about Raphinha, because Raphinha was everywhere.

‘It’s fair we did have some conversations with Deco because Deco is his agent and I have a good relationship [with him] – we are friends.

‘I just said to Deco, “Can you explain to me the situation with Raphinha?” and he was clear, “Edu, we have a good relationship but I’m not going to lie to you, his idea is to go to Barcelona because he’s dreaming to go to Barcelona, and we’ve been talking to Barcelona since a long time ago”.

‘Okay, thank you very much, if something happens then just let me know because I can explore and understand the situation. If not, no problem and we carry on with our relationship.’

While a move for Raphinha failed to materialise, Arsenal have still enjoyed a productive transfer window, bringing Gabriel Jesus, Oleksandr Zinchenko, Fabio Vieira, Matt Turner and Marquinhos to the Emirates.

Asked if he had been successful in bringing in Mikel Arteta’s top targets this summer, Edu added: ‘Yes, almost 100 per cent of them.

‘I understand sometimes players want to play Champions League football, but I think we can offer something very special for the players as well.

‘It’s not only Champions League, but you can be part of a group of players which can achieve something very special for this football club. And then I always ask them if they want to be part of the project we’ve been building as we’re doing.

‘I’m sure we will do something very special for this football club and then when I explain to the players, they really understand [it] and that’s why they’re here.’