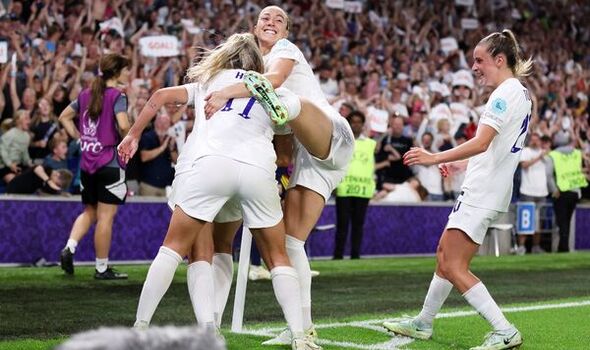 Georgia Stanway’s extra time rocket propelled England into the Euro 2022 semi-finals just when it looked like Spain had them on the ropes. In the boldest tactical move of her life manager Sarina Wiegman took off player-of-the-tournament Beth Mead, Wayne Rooney-in-waiting Ellen White and their most creative playmaker, Fran Kirby.

And it worked! England were just six minutes away from instant defeat when one of the replacements Ella Toone coolly converted the knockdown from another Alessia Russo, to level the scores.

Then in extra time, with the belief flooding back, the Bayern Munich midfielder strode forward to hit a curling shot past the Spain goalkeeper from 20 yards to the relief of everybody at the Amex Stadium.

Everything had been going so perfectly up to tonight that even the one negative – Wiegmna’s day-of-the-game Covid test – was a good thing.

She had had to watch the Northern Ireland game in isolation and was only able to communicate with the players via her wired-up staff.

And while she was there in the flesh to deliver a half-time pick-me-up her opposite number Jorge Vilda appeared to have produced a tactical masterstroke to dump the hosts out of the competition. 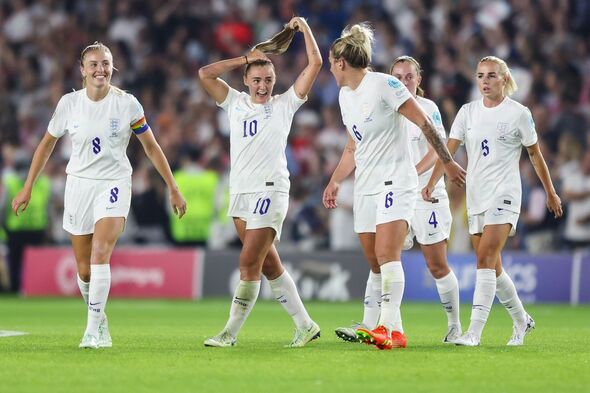 Spain had been dominant, but it was the tactical introduction of Athenea del Castilla which would almost instantly make the difference. Rachel Daly committed herself completely chasing the ball out wide like a bull in a china shop.

Del Castilla stepped inside her charge with the grace of a skilled matador, picked out Esther Gonzalez and the Spain no. 9 squeezed her shot past Mary Earps and into the net.

Then moments later her deep, swinging cross shot could only be palmed up in the air and if it had not been hacked clear by Lucy Bronze, the game could have been over.

Wiegman’s recovery in time to take up her full duties had been seen as the perfect boost going into the game but throughout a frustrating first half she had struggled to get her messages through to players despite toeing the line at the front of her technical area wagging her finger furiously.

Spain had simply settled into their usual possession game unruffled by England’s attempts to press them high up the pitch.

Luckily, goalkeeper Mary Earps, who had largely been a spectator at the tournament so far, showed her worth with some comfortable early handling which blunted much of what Spain could throw at England.

At the other end, Vilda drafted in Olga Carmona at left-back to shut the door on what
has been a lucrative furrow during their group games… and it worked.

Neither Beth Mead or Lauren Hemp were getting much change anywhere on the pitch.

So when England bundled the ball into the back of the Spain net it was somewhat against the run of play. 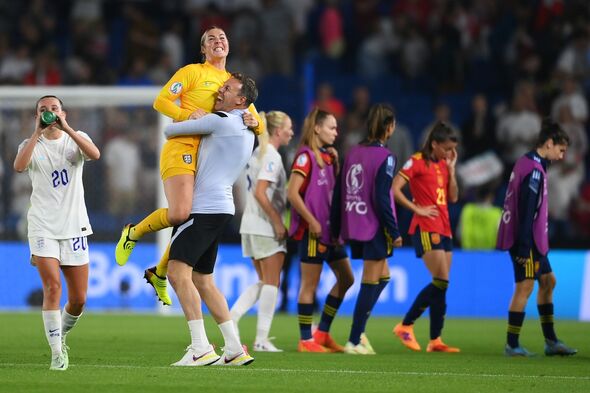 A deep free-kick was side-footed back across goal for Ellen White to bundle in but Lucy Bronze, very much in the midst of the action despite not touching the ball, was ruled offside.

It was clear that something drastic was going to have to change if England were to conjure a goal that counted after going behind. Wiegman went nuclear.

The triple change lit the fuse, the Amex came alive, and Spain for the remainder of the 90 minutes were blown away.

Russo’s strength set up the goal for Toone and the physicality caused such widespread protest that substitute goalkeeper Misa Rodriguez was booked.

Five minutes were added but it was not enough. We were going into extra time. And the rest is history…