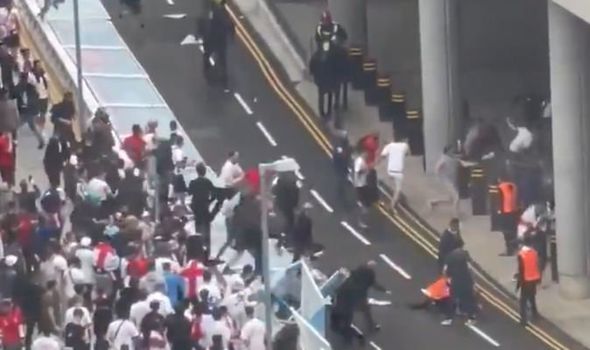 A number of England supporters have attempted to force their way into Wembley Stadium ahead of tonight’s Euro 2020 final. Footage shared on social media captured a large group of people being held back by stewards and security staff at the gates outside the stadium, while others appeared to break through.

This evening’s historic match will represent England’s first appearance in a major tournament final since 1966, but the pre-match scenes outside Wembley were nothing to be proud of for the Three Lions.

People were seen attempting to barge through the gates in order to gain entry, with members of staff holding firm in their resistance of the crowd.

A large number of others were then spotted running past security and making their way up a flight of steps towards the stadium.

The incident comes after a minority of England fans were criticised for their behaviour during Wednesday’s semi-final win over Denmark.

A laser pointer was shone in the eye of Danish goalkeeper Kasper Schmeichel as he was preparing for Harry Kane’s late penalty, while boos were heard ringing around the Wembley stands during the national anthem of the visitors.