England’s Euro 2022 hero Chloe Kelly cracked a joke about her shirtless celebration during the Lionesses’ victory parade on Monday. The 24-year-old was the centrepiece of an iconic scene as she wheeled away to cheer what turned out to be England’s winner on the day, sealing a second successive European Championships for boss Sarina Wiegman.

Kelly’s input didn’t come until late in the game, with England and Germany embroiled in a tense contest that went to extra time. Ella Toone sparked a frenzy inside Wembley with her superb chip to open the scoring, but Lina Magull brought the crowd crashing down with a 79th-minute equaliser.

The two fatigued sides traded blows in extra time but it was substitute Kelly who made the telling impact, poking home after a scramble in the box to send the Lionesses on their way to glory. She was swarmed by team-mates while swinging her shirt overhead in celebration, which is sure to go down as an iconic moment in English international football.

During a raucous victory parade on Monday, in which most of the squad sported a pair of sunglasses after last night’s celebrations, Kelly joked: “The shirt is staying on!” 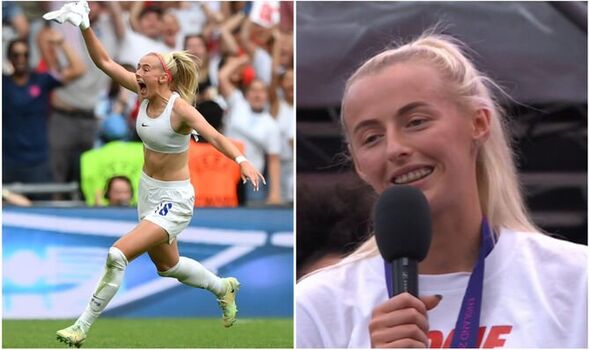