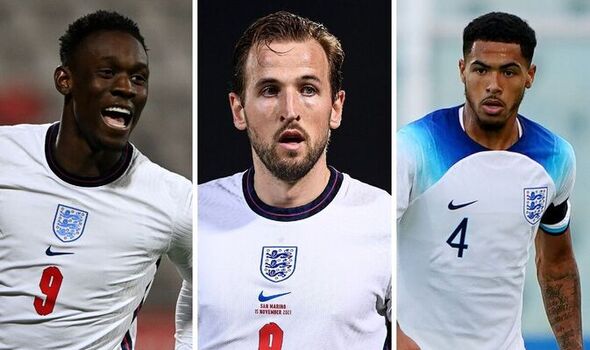 All focus is on this year’s World Cup, but some will be looking towards the 2026 edition to make their mark. Express Sport takes a look at who could feature in England’s 26-man squad with 12 changes from Gareth Southgate’s side for Qatar.

Jordan Pickford is set to remain as England’s No 1 for the 2022 World Cup, but that could change in four years. Aaron Ramsdale could be in line to take the No 1 spot, but Dean Henderson and Nick Pope will be pushing him close if they continue their excellent form.

Henderson’s selection may well depend on where his career goes with his Manchester United future still up in the air. But Ramsdale will fancy his chances if he begins to help Arsenal start their revival and challenge for Premier League titles once more.

Both Reece James and Ben Chilwell will want to put their injury woes behind them in time for the 2026 World Cup having been nailed on to make this year’s squad before being struck down. Trent Alexander-Arnold, Ben White and John Stones will all fancy their chances at also keeping their spots, but there’s a number of young stars who will be fighting to break into the set-up in years to come.

Fikayo Tomori was unfortunate to miss out of Southgate’s squad this time around while Marc Guehi and Joe Gomez were also close to being selected. Levi Colwill and Lewis Hall are tipped as future stars for England and the 2026 World Cup may be their first big opportunity.

Southgate is already blessed with talented young central midfielders with Jude Bellingham and Declan Rice set to be the go-to pairing for years to come. But Conor Gallagher and Kalvin Phillips will similarly hope for regular minutes in an England shirt for several years.

Phil Foden and Mason Mount will still be approaching their prime years in 2026, but Jacob Ramsey could be England’s next break-out star. The Aston Villa star has impressed ever since breaking through, while Harvey Elliott may also target the 2026 World Cup as his chance to break in.

Fabio Carvalho could also be an option for whoever is in charge of England with the Liverpool star quitting Portugal’s Under-21 side this week.

Harry Kane is showing no signs of slowing down in front of goal and may well still be one of the world’s most lethal attackers in 2026. Whether that’s with Tottenham or another club remains to be seen, but he’ll likely still be England’s go-to striker in four years.

Bukayo Saka and Marcus Rashford will also have more than enough time to keep their place in the England set-up. But Folarin Balogun could be the next young England striker to break into the squad with the 21-year-old highly-rated at Arsenal.

He’s been prolific at under-21 level with six goals in just eight starts and is making a name for himself on loan at Stade Reims this season.