Adelaide United have engaged South Australia Police to investigate disturbing and specific death threats levelled via social media at Josh Cavallo, who the club says has been the target of global vitriol since his decision to come out as gay.

It comes after Cavallo called out homophobic abuse he suffered during Adelaide’s A-League Men 1-1 draw against Melbourne Victory on Saturday night at AAMI Park – an incident which is now subject to an investigation from the Australian Professional Leagues, which has vowed to ban any identified perpetrators from attending future matches. 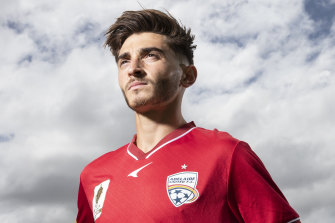 Josh Cavallo was the subject of homophobic abuse from Melbourne Victory fans on Saturday night.Credit:Getty

Adelaide chief executive Nathan Kosmina said the 22-year-old has been dealing with a deluge of social media abuse since last October, when he made worldwide headlines by becoming the first active top-flight professional footballer in the world to announce he was gay.

The situation has taken a quiet toll on Cavallo, who Kosmina said was in a good headspace despite the weekend’s events, but had been motivated to speak out after being sprayed with homophobic slurs and death threats by a section of Melbourne Victory fans while he was being substituted out of the game during injury time.

“He’s a real resilient young man. We’ve spoken often about the courage he displayed in terms of coming out and everything that went along with that, the pressure that was on him as a global voice of the LGBTI+ community was significant,” Kosmina said on Monday.

“He’s arguably the highest profile men’s player in the league now, in terms of the global reach of his name and brand. With that, and our sport being global, means that he gets comments from all over the world – majority positive, but there’s an element that is negative. And that is ongoing.

“I think where this [incident] went a little too far was the quantum of it. It wasn’t an individual. It was more of a collective voice coming out of that northern stand and he said, basically, ‘Enough’s enough. I’m calling this out’. And we say, ‘We’re right behind you, Josh.’”

Sources familiar with the incident say the section of Victory fans were singing “if you want to stay alive, go home gypsy” at Cavallo as he walked off the field following a collision with another player that led to his exit from the match. Around the same time, some individuals within the fan group yelled homophobic slurs at him. Kosmina said Cavallo had received messages from other Victory supporters nearby who also heard the abuse.

“He got messages on social media saying, ‘Yep, we heard the comments. It was disgusting,’” Kosmina said.

“I think there is an overwhelming sentiment of support from the majority of fans. It’s a [small] element that needs to be weaned out. Twenty or 30 years ago, this is the sort of language that was more common. Now it’s not acceptable.

“I don’t want my young boys at a game where abused is being yelled from the stands and I don’t think any families do, so it’s good that he has had the support from Victory supporters in that instance saying, ‘that wasn’t on, we’re with you Josh.’”

The APL and the operators of AAMI Park are now combing through CCTV footage to identify those responsible.

“There’s more cameras at our games than there ever have been before and the security infrastructure at AAMI Park is probably the best in the country,” Kosmina said.

“We have to let it run its course. But what’s as important as it is to identify the perpetrators is the messaging that that goes beyond this thing. If we don’t identify who they are, then it’s not the end of it. We’re not just going to tools down once the investigation is done – it’s something that needs to carry on this season, but then also beyond Josh when one day he departs Adelaide United.

“It’s something we’ll work with stadiums, both home and away now – we’ll need to address [it] with clubs interstate, to keep an eye out on this and how we monitor it.

“I think the active supporter groups of clubs will play a key role in this as well. You’ve seen some of the messaging out of the Red Army [Adelaide United’s home end] this season in support of Josh has been really positive. We’d hope that other active groups take on that moving forward.”

Ange Postecoglou is reportedly closing in on his first Australian signing since taking on the job as Celtic manager, with the Scottish Premiership club poised to land fringe Socceroo Riley McGree.

Capped seven times for Australia, McGree also represented his nation at the Tokyo Olympics and was given his first senior call-up by Postecoglou almost five years ago.

The 23-year-old midfielder has been playing for English Championship outfit Birmingham City since October 2020 on loan from Charlotte FC, a new Major League Soccer team which will begin its inaugural season next month. 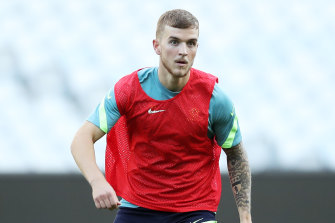 Riley McGree is set to be the first Aussie player signed by Ange Postecoglou at Celtic.Credit:Getty

McGree impressed towards the back end of his loan stint but while Birmingham were unable to sign him on a permanent deal, there are other clubs keen to ensure he stays in the United Kingdom.

Middlesbrough were said to be one of the main teams in contention, but it now appears that Celtic are the odds-on favourites to land McGree for a transfer fee of around $4 million.

A-League club Adelaide United are expected to receive a percentage of that transfer fee as agreed when they sold McGree to Charlotte in 2020. He played 30 times for Birmingham, scoring three goals and assisting twice before the expiry of his loan contract last month.

“I thought he looked exciting from the moment he broke into the Adelaide team,” Postecoglou said in March 2017 when he called up McGree for the Socceroos. “I really like the way he has adjusted to playing in an unfamiliar position against some really good opponents.”

An attack-minded midfielder capable of playing as a No.10, 8 or 6, McGree would join Postecoglou and Tom Rogic as part of a growing Aussie continent at Celtic.

This move would continue McGree’s second foray into European football, following an ill-fated move to Belgian outfit Club Brugge in 2017.