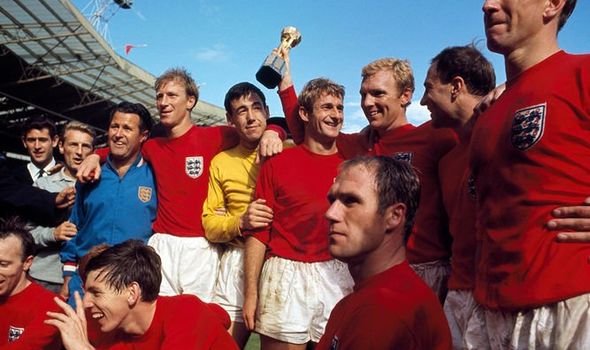 Roger played as a striker alongside Sir Geoff in Sir Alf Ramsey’s glorious England side that beat West Germany 4-2 to lift the Jules Rimet trophy at Wembley. He remains Liverpool’s record league scorer with 244 goals and was known as “Sir Roger” to Anfield supporters.

He tweeted a picture celebrating with Roger and Alan Ball after scoring against Argentina in the 1966 quarter-final.

A dazzling forward, Roger won 34 England caps and scored 18 international goals after making his debut in 1962 when Bill Shankly’s Liverpool side were still in English football’s second tier.

He played in every game of the 1966 World Cup and scored three times to help England out of their group. Liverpool players wore black armbands last night in their Champions League group game against Porto in Portugal.

Manager Jurgen Klopp said: “Roger Hunt comes second to no one in his importance in the history of Liverpool FC.

“I am told the Kop christened him ‘Sir Roger’ for all his achievements. A goalscorer who never stopped working to help his teammates. He would have fitted well within our current team.”

Liverpool FC said Roger “passed away peacefully at home following a long illness”, adding: “The thoughts of everybody at Liverpool Football Club are with Roger’s family and friends at this sad and difficult time.”

Football Association chief executive Mark Bullingham revealed England would pay tribute when they play Hungary in a World Cup qualifier at Wembley on October 12. He said: “Hunt will always be treasured by fans across the country as one of our World Cup winners of 1966.”

Liverpool legend Sir Kenny Dalglish said he had been lucky to follow Roger. The former Kop striker and manager said: “RIP Sir Roger Hunt. Those of us who followed you and Shanks’s men were fortunate to stand on the shoulders of giants. “Thank you for everything you have done.”

He was echoed by Ian Rush, Anfield’s record scorer in all competitions, who said: “Very sad to hear of the passing of Sir Roger Hunt, someone I would always look up to. He was a fantastic goalscorer and true gentleman on and off the pitch.”

Ex-Liverpool defender and Sky pundit Jamie Carragher said: “RIP Sir Roger Hunt, one of the greatest goalscorers our club has seen. Sir Roger along with the other legends from the 60s made LFC the club it is.”

Another Kop hero John Aldridge said: “I’m absolutely gutted to hear of the passing away of one, if not the best, LFC strikers Sir Roger Hunt.”

And it follows the passing two weeks ago of Jimmy Greaves, who he played alongside up front for England in the 1966 group games before the latter was injured.

Former Liverpool defender and Match of the Day pundit Mark Lawrenson tweeted: “Hopefully Roger & the Saint are renewing their Brilliant Partnership wherever they may be. Love to the Hunt family. We feel your pain.”

Arch rivals Everton paid tribute, momentarily bridging the Merseyside divide, tweeting: “Our thoughts are with Roger Hunt’s loved ones and everyone at @LFC at this sad time. RIP.”

And ex-Everton and England midfielder Peter Reid said: “A star and a wonderful player who helped me as a young apprentice [at Bolton]. A World Cup winner who had time and encouragement for all young players back in the day.”

Former Three Lions forward and Match of the Day presenter Gary Lineker said: “Saddened to hear that another of the heroes of ’66 has left us. Roger Hunt was a truly great striker for both @LFC and his country.

“He may be gone but his achievements will always be remembered.”

Under legendary Kop boss Shankly he helped lift the club out of the Second Division in 1962, scoring 41 goals in as many games.

With 285 goals from 492 appearances, his league scoring record of 244 is unlikely to be broken.

After leaving Anfield in 1969 he had three successful seasons with Bolton Wanderers.

He also enjoyed the distinction of scoring the first goal on the BBC’s Match of the Day – a looping volley in a 3-2 win over Arsenal on August 22, 1964.

Like Jimmy Greaves, Roger was overlooked for a knighthood but received an MBE in 2000.

After retiring as a player, he joined his brother Peter as the third family generation running the Hunt Brothers haulage business.

He married Patricia O’Brien in 1959 and they had two children, David and Julie.

The marriage ended in divorce and he subsequently married Rowan Green and they lived near Warrington. Rowan and his children survive him.

Despite his formidable scoring record, one of Shankly’s most memorable quotes came when he was asked about his key man missing some chances.

The charismatic supremo said: “Yes Roger Hunt misses a few, but he gets in the right place to miss them.”

Roger reciprocated fondness for his old boss and for Liverpool, saying: “He was great for me. We had a very good relationship. We had a great team and I always thought to myself, ‘I’m scoring today’.

“And I usually did score. I scored a lot of goals, I was a good player.”

Roger ended that interview in January 2020 by being asked for one last reflection on his career. With a glint in his eye, he said: “It’s not been bad.”

Tags: Celebrities, entertainment, head
You may also like
Latest Posts