So far, so good for Ange Postecoglou. Two months into his tenure at Celtic and he’s won over a legion of doubters, transformed the team’s style of play, restored a sense of hope and direction within a club that had completely lost it, and secured a spot in the group stage of the Europa League.

But the real work, in so many ways, begins now. On Sunday night, Postecoglou will lead one half of Glasgow into battle against the other in arguably the most intense derby in world sport. Nothing else matters. 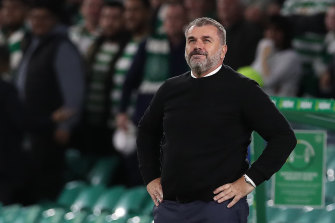 Ange Postecoglou’s first Old Firm derby will be the ultimate barometer for his new-look Celtic.Credit:Getty

The only people in his corner away at Ibrox Stadium will be his players and staff – there won’t be any Celtic fans in the house due to a ticketing dispute between the two clubs at the heart of this ancient rivalry. But there will be over 50,000 Rangers supporters, all of whom had to settle for watching their team win their first title in 10 years on TV last season and will be baying for fresh blood.

The Old Firm derby, they say, has to be felt to be truly understood – more than a century’s worth of political, cultural and religious division between the British Protestants aligned with Rangers and the Irish Catholics allied behind Celtic crammed into a 90-minute tinderbox. It’s not as violent as it might have been 20 or 30 years ago, but the hate lives on.

“There’s still that poisonous element that can happen after these games,” said Scottish football writer and columnist Adam Miller, the host of the Old Firm Facts podcast. “It’s not necessarily advisable for people to go into town and do their shopping at 2pm once that game finishes on Sunday.”

Some Celtic fans prefer to call it the Glasgow derby in a disparaging jab at their rivals. To them, the Old Firm no longer exists because the “real” Rangers are dead. The club’s holding company was liquidated almost a decade ago, sending Scotland’s most successful club to the bottom of the fourth division. Their slow climb out of the doldrums culminated in a league title to cap off an utterly dominant, unbeaten season that blocked Celtic from an unprecedented 10th crown in a row and reignited the rivalry. 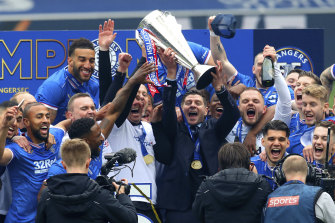 The emergence of Steven Gerrard’s Rangers as a dominant force after the club’s financial troubles has reignited their rivalry with Celtic.Credit:Getty

“Celtic were asleep at the wheel,” said Daily Record sportswriter David McCarthy. “That’s why Celtic fans were so down and basically started this season thinking their team was going to get humped again. That’s why Postecoglou has been so hugely welcomed, because they’ve got a bit of hope. They had absolutely none before this guy arrived.”

In a competition that is essentially a two-horse race – the last time either Celtic or Rangers didn’t win the Scottish title was 1985 when Aberdeen did it under a certain Alex Ferguson – these fixtures tend to shape entire seasons.

Handily for Celtic, they come into it in decent form. A run of six consecutive wins including two near-flawless 6-0 victories in the league was broken on Friday morning in a 2-1 defeat to Dutch side AZ Alkmaar, although they prevailed 3-2 on aggregate to confirm their place in the Europa League.

It was a classic Postecoglou rollercoaster – scintillating and scary in equal measure. Kyogo Furuhashi, his star Japanese signing, opened the scoring after three minutes by completing a terrific team move, but two howling defensive errors from goalkeeper Joe Hart and centre-back Carl Starfelt invited AZ back into the tie. Somehow they held on, repelling wave after wave of attack in a desperate second half.

“We just lost belief. We had to break through that barrier,” Postecoglou said. “I told the players that fear is the biggest impediment to progress and we had to eliminate that from our game.

Rangers, meanwhile, are looking a tad shaky. Like Celtic, they crashed out of qualification for the UEFA Champions League and slumped to a rare defeat in the league to Dundee United earlier this month. It’s unclear if their manager, Steven Gerrard, will even be there on Sunday, as he and six of his players are isolating due to a COVID-19 outbreak within their squad.

But they can count on one thing: Postecoglou’s Celtic will come at them all guns blazing. They might be a work in progress but it’s the only way he knows how to coach, and not even the tumult and tension of his first Old Firm clash will convince him to abandon his methods.

The outcome, either way, will be absolutely fascinating.

Tags: Celti, Fearless, has, Postecoglou
You may also like
Latest Posts