Harry Kane has the eye of the tiger about him again, Eric Dier’s cult hero status is growing… and new boy Richarlison slotted in nicely – FIVE THINGS WE LEARNED from Spurs’ opening pre-season win

Tottenham opened their pre-season campaign with a 6-3 win against Team K League to leave Antonio Conte satisfied with an energetic work-out for his team and a crowd of more than 64,000 thrilled by a feast of goals, including two for Son Heung-min. 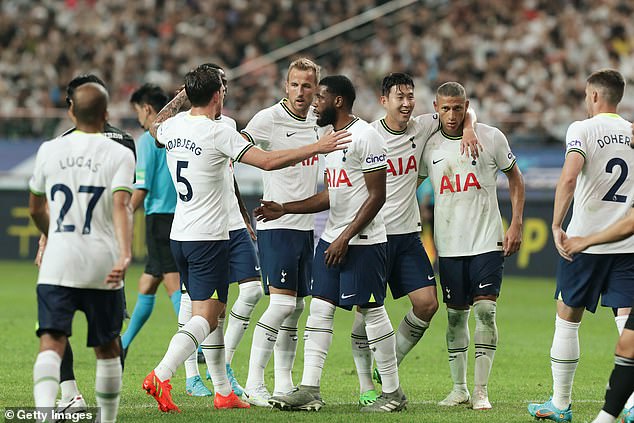 Richarlison was recruited for his ability to play in different roles, and deputise through the centre Harry Kane when necessary. This was his initial role against Team K League and he looked comfortable, troubling the centre halves with his mobility, changes of pace and strength on the ball.

With Kane on at half-time, he started the second half wide on the left and switched almost immediately to the right flank when Son came on to a rapturous ovation in the 47th minute.

There was a natural chemistry evident between Richarlison and Lucas Moura. In the first half, Richarlison drifted wide and Moura jinked inside from the left. In the second half when they were paired on the right, with Moura at wing-back.

Richarlison created the first chance of the game, a sitter somehow slid wide by Emerson Royal, and must’ve thought he had a goal as he geared up for a diving header just before half time. Ryan Sessegnon’s crisp cross was fizzing towards Richarlison when centre-half Dave Bulthuis deflected it clear with an acrobatic volley.

He missed a good chance to make it 2-0, heading tamely at the goalkeeper from Royal’s cross but, overall, this 45 minutes represented a promising opening 45 minutes from a striker who could cost Spurs up to £60million. 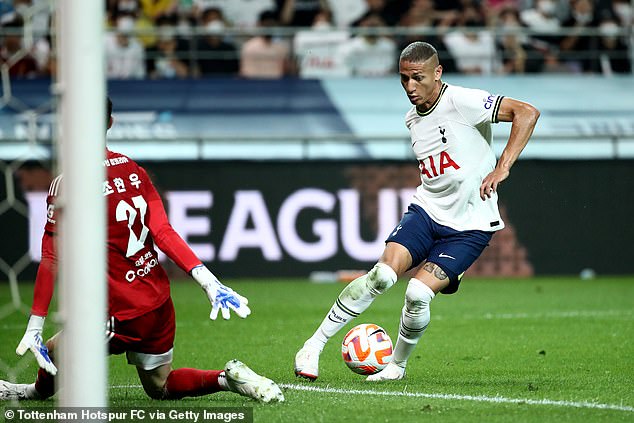 NO SURPRISES FROM CONTE

There were no surprises when it came to the shape of the team. Conte will not be venturing far from his tried and tested 3-4-3 formation or his intense, direct and muscular style of play.

Absences included Ivan Perisic, who is still not fit to start full training after an injury at the end of last season. Dejan Kulusevski and Ben Davies did not play but completed a pre-match running session up and down one side of the pitch. Yves Bissouma and Fraser Forster were ill and not involved. 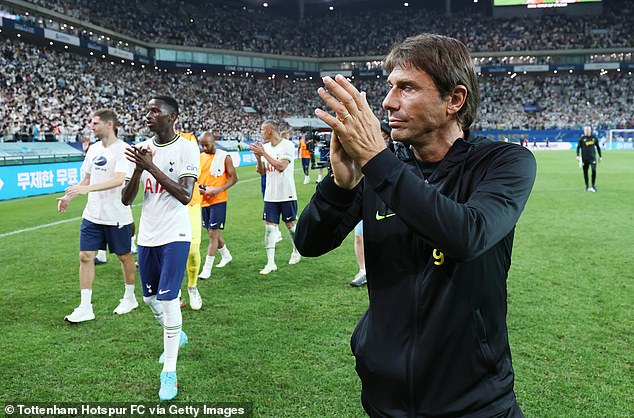 Tottenham were careless in defence, understandably in this their first game, crammed into a punishing training schedule. Conte will have been as much interested in fitness as anything else but Emerson Royal and Davinson Sanchez were the chief culprits when it came to sloppiness at the back.

Sanchez, slow to react to the danger on the first goal headed in by Gue Sung Cho, might have been relieved there was no VAR in operation in what proved to be the friendliest type of friendly fixture. He somehow avoided yellow cards for two thunderous and badly-timed tackles and could easily have conceded a penalty for another trip. 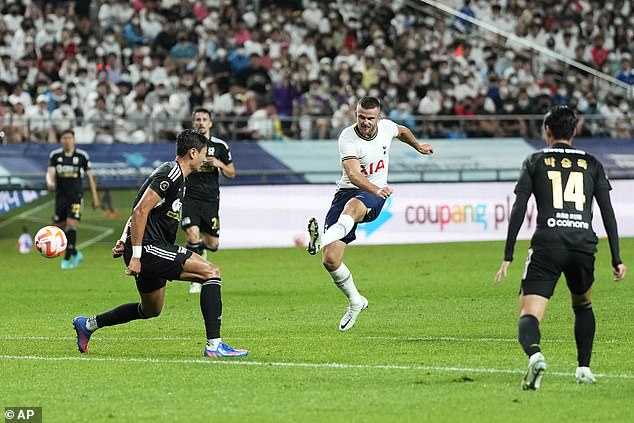 Spurs provided more protection for their centre halves in the first half with a deep shield of Oliver Skipp, making his first appearance since a pelvic injury ended his season in January, and Rodrigo Bentancur than in the second half with Pierre-Emile Hojbjerg and teenager Pape Matar Sarr in the same roles.

Eric Dier’s cult status, however, continues to grow. Dier was among the star attractions during an open training session on Monday and drew a huge pre-match cheer from the 64,100 in the stands of Seoul’s World Cup Stadium but that was nothing compared to the roar when he scored the opening goal.

Dier strode out of defence, traded passes and lashed the ball past goalkeeper Hyeon Woo Jo with his left foot from 25 yards.

Royal, Bryan Gil and Ryan Sessegnon were off target with excellent chances in the first half but Kane had only been on the pitch for a few minutes when his low cross forced an own goal from Jin Hyuk Kim.

Kane followed it with a screamer from distance to rival Dier’s for Tottenham’s third and a free-kick converted low from just outside the penalty area for the fifth, all in the net behind which he was throwing up after Monday’s gruelling running session.

He has the eye of the tiger about him again, cutting a very different figure to this time last year when he was agitating for a move to Manchester City. 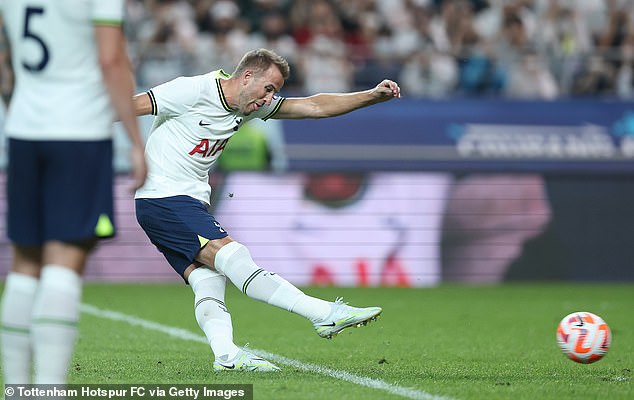 Harry Kane has the eye of the tiger about him again, cutting a very different figure to last year

There were nine goals and some of them delightful strikes, including those by Team K League’s Lars Veldwijk and Jun Amano, but those scored by Son were the ones they came to see.

The first was a penalty, awarded for handball, and clipped into the net with what appeared to be a scuffed panenka by the Spurs striker. There was just enough to beat the ‘keeper and the noise for Son’s trademark celebration eclipsed the noise when it went in.

His second was Tottenham’s sixth, a complete gift presented to him by a stray pass out of defence, which he gratefully seized upon and turned into the open goal. Twice he came close to a hat-trick. ‘Nice one, Sonny’ they sang. 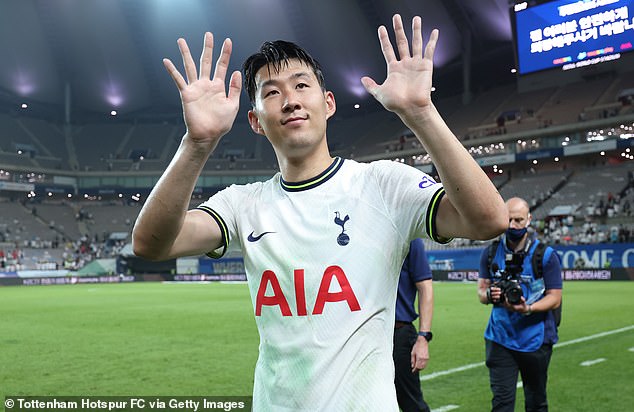