The Socceroos are bracing for a frosty reception at the World Cup after their public stance against Qatar’s human rights record, which has prompted FIFA to ask all participating countries to “focus on the football” and stop dragging the sport “into every ideological or political battle that exists”.

FIFA has written a letter to the 32 participating nations, signed by president Gianni Infantino and secretary-general Fatma Samoura, which appears to be a reaction, at least in part, to the video released by the Socceroos last week – the first collective statement made by any team on the controversies that have dogged Qatar since it was awarded hosting rights in 2010.

The 16 players involved in the video called for the tiny Middle Eastern state to end its ban on same-sex relationships and provide “effective remedy” to migrant workers who have been subject to abuse while building stadiums, hotels and other infrastructure for the tournament, some of whom have died.

Football Australia has confirmed it had received FIFA’s letter, but offered no further comment, directing the Herald and The Age to the comments made by the players and a separate, less critical statement issued by the federation.

“We know football does not live in a vacuum and we are equally aware that there are many challenges and difficulties of a political nature all around the world. But please do not allow football to be dragged into every ideological or political battle that exists,” Infantino and Samoura wrote.

“At FIFA, we try to respect all opinions and beliefs, without handing out moral lessons to the rest of the world. One of the great strengths of the world is indeed its very diversity, and if inclusion means anything, it means having respect for that diversity. No one people or culture or nation is ‘better’ than any other. 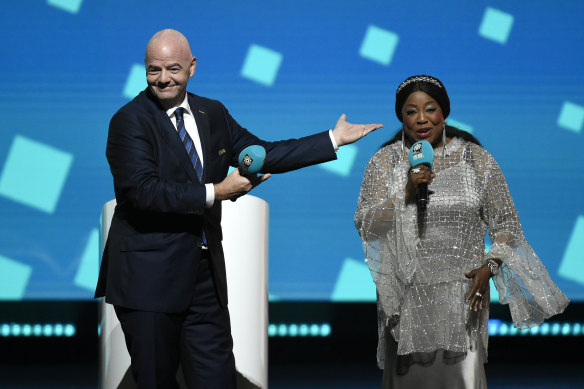 “This principle is the very foundation stone of mutual respect and non-discrimination. And this is also one of the core values of football. So, please let’s all remember that and let football take centre stage.”

The letter comes as Australian players, coaches and officials prepare to fly into Doha over the next week or so, with some feeling a sense of trepidation over how they might be treated in Qatar in response to their collective statement, according to multiple sources.

While other teams have also spoken out over Qatar’s treatment of migrant workers and LGBTQI+ people – and some are considering their own form of protest before or during the tournament – none have gone as far as the Socceroos, who have copped flak on social media from Qataris and people from other Middle Eastern nations since their video was released.

The Australian team will be training and staying at the Aspire Academy, a $1.3 billion government-funded facility that they will share with the host nation, and is considered the best of its kind in the country.

Socceroos legend Tim Cahill, who lives in Doha, is the chief sports officer at the Aspire Academy and also an official ambassador of the World Cup, and has previously said he could help affect “big change” in Qatar by taking on the latter role.

Cahill is also expected to work with the Socceroos and coach Graham Arnold to assist with logistics on the ground, and sources are hopeful that his influence could help guarantee the team is provided with the appropriate hospitality when they arrive.

Nasser Al Khater, the chief executive of Qatar’s World Cup organising committee, said in a recent interview with Sky Sports – conducted before the Socceroos’ statement – that most people who were criticising the country were “not experts” on labour rights, were “possibly” motivated by racism, and told football administrators to “focus on their teams” instead.