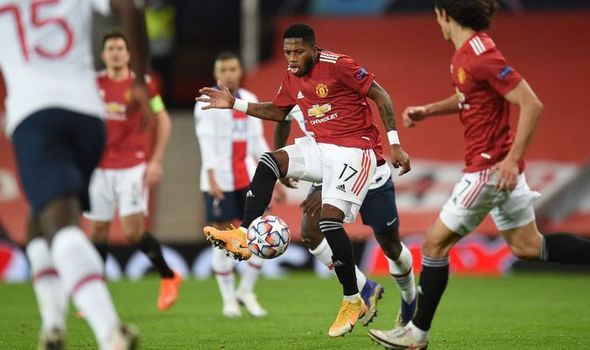 Fred was sent off in the second half of Manchester United’s Champions League clash against Paris Saint-Germain on Wednesday night.

It was the Brazilian’s second yellow card, with the refereeing giving him his marching orders.

Fred was perhaps lucky to avoid a red card in the first half when appeared put his head towards his opponent’s.

After a check of the pitchside monitor, the referee decided to award the midfielder a yellow.

However, in the second half, Fred’s challenge on former United midfielder Ander Herrera earned him a second booking.

Fans have since taken to social media to react to Fred’s dismissal.

One wrote on Twitter: “Basically everybody said Fred should have been replaced at half-time. It was inevitable.”

Another wrote: “Feels wrong to complain about Fred eventually being sent off given what’s gone before but it’s so very obviously been coming. He contributed to the second goal by giving a simple ball away, too.

“Hate saying it, but you have to question the manager on letting him continue.”

A third added: “The decision to leave Fred on could cost us a place in the knockout stage.

“I have no agenda because I love Ole but I would like to hear his explanation of why he trusted a player who lost his head within the first 15 minutes of this game.

“The whole world saw this coming but him.”