Garang Kuol was born in Egypt, made in Shepparton and is poised to tear up the World Cup: After dazzling against Barcelona to seal a Newcastle switch, the Australian wonderkid is ready to be Graham Arnold’s star man in Qatar

Garang Kuol stands at the beginning of a path only a handful of Australian footballers have trodden.

A $520,000 move to Newcastle United last month has stamped the 18-year-old as one of the most exciting talents to hail from his country since Harry Kewell. Like Kewell’s move to Leeds all those years ago, Kuol has been backed by a Premier League club with lofty ambitions to sit at the top of the food chain.

But the journey to this point has been far from a smooth ride for Kuol. In fact, in a world where ‘wonderkids’ are tracked and nurtured from an early age, this is a young man whose story stands in stark contrast to his contemporaries. 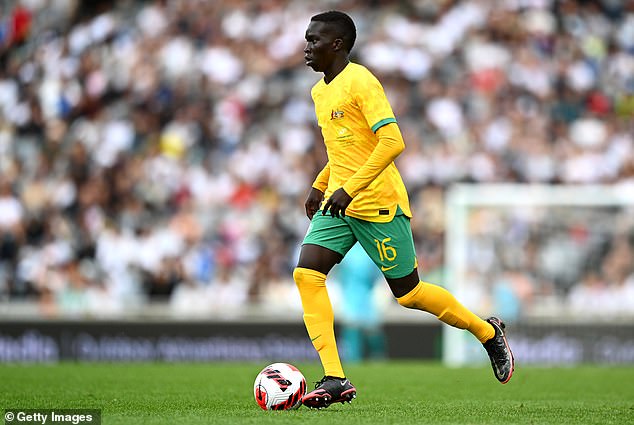 Born in Egypt to Sudanese parents who fled their homeland in search of a better life, the Kuols later relocated to Australia, where they were granted refugee status to build a secure future.

Yet, rather than grow up in the chaos of inner city Melbourne, Garang’s family – consisting of Garang and his four brothers – settled for Shepparton, a country town 200 kilometres to the north of Victoria’s capital.

And it was in the humble backdrop of Shepparton where Kuol’s passion for the round ball really flourished. It was clear that Garang, along with older sibling Alou, had talent that set them apart from most youngsters in the area – the brothers a pair of diamonds in the rough, waiting to be discovered.

But that discovery was far from straightforward. Garang’s mother, Antonita, worked as a season worker at SPC, but could not afford the costs involved with sending the brothers to overseas tournaments, where international scouts would be able to cast their eye over the duo. 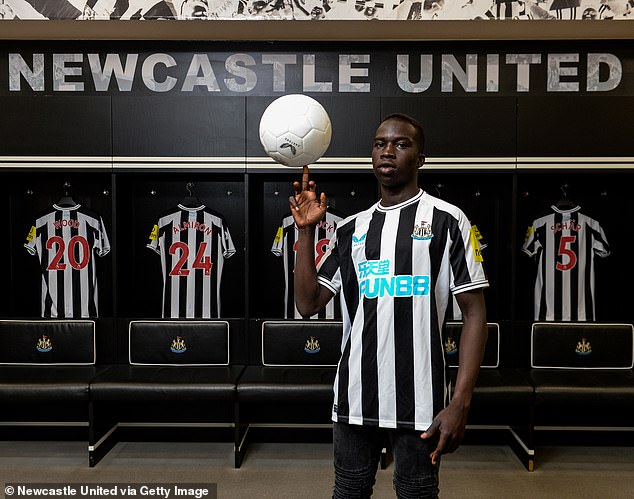 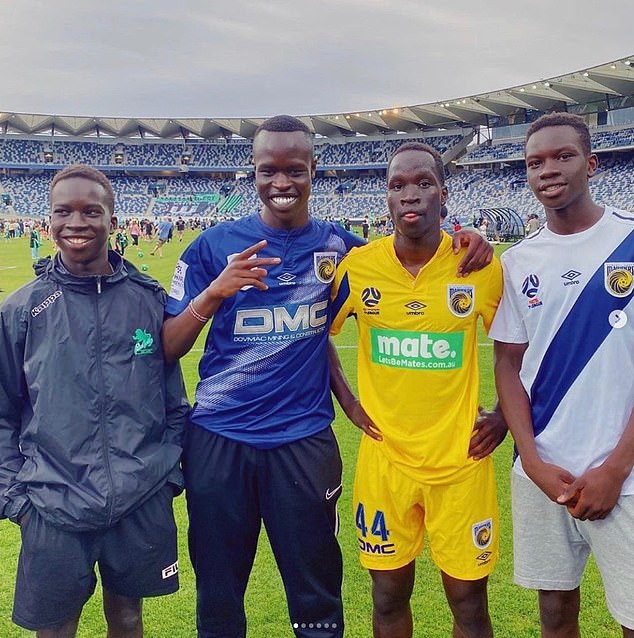 That is when the Shepparton community came together for the Kuol family. A fundraiser generated a staggering $8,000, which was enough to allow the Kuol brothers to represent regional Victoria in Japan and Spain.

‘All the community around is supportive. If I can’t take them [her kids] [to a game] they will take them, and they sometimes bring them home,’ she told ABC Sport.

‘You feel like your kids are going to be okay […] your kid can be safe around them.’

Reflecting on the community fundraiser, Antonita said: ‘That was very amazing. And I really don’t want to forget it. That time was a very, very big time to see somebody can pay thousands of dollars to help you.

‘We are very blessed to be in Shepparton.’

The Shepparton community’s act of kindness set the wheels in motion for the two brothers. Alou trialled at Melbourne Victory and Western United before finding a home at Central Coast Mariners. Garang later joined the club’s academy. 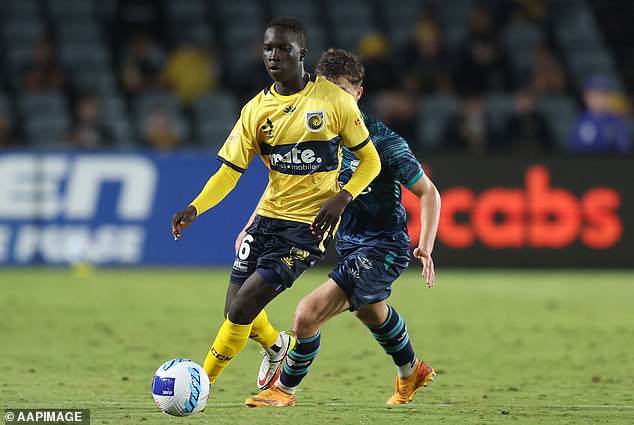 With help from the local community, Kuol’s talents were spotted by scouts at Central Coast 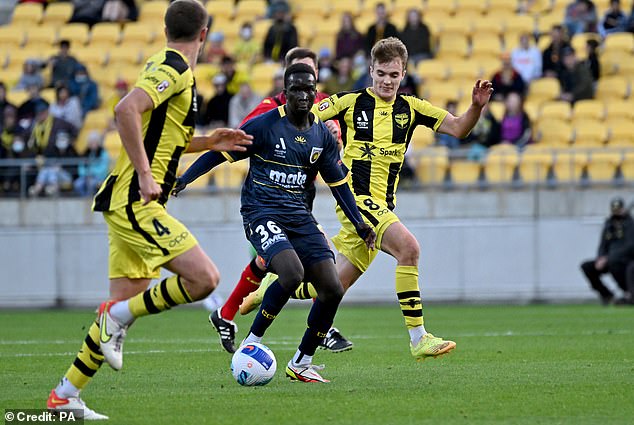 The elder Kuol sibling made an instant impact for the senior team, scoring seven goals in 30 appearances in 2020-21. It came as no surprise when clubs from Europe began to show an interest in the striker, who sealed a move to German outfit Stuttgart.

As for Garang, he made his Central Coast debut eight months after Alou’s move to Germany’s second tier and made an instant impact, scoring from the bench in the Mariners’ 6-0 win over APIA Leichhardt in the FFA Cup.

His A-League debut went just as well as his senior bow, scoring in a 5-0 romp over Wellington Phoenix in April. Kuol went onto bag four goals in seven appearances for his side, earning him a ‘Commissioner’s pick’ in the A-League All Stars game against Barcelona in May.

And, as was the case in his two debuts for Central Coast, Kuol came off the bench to make an instant impact against one of the world’s best sides. 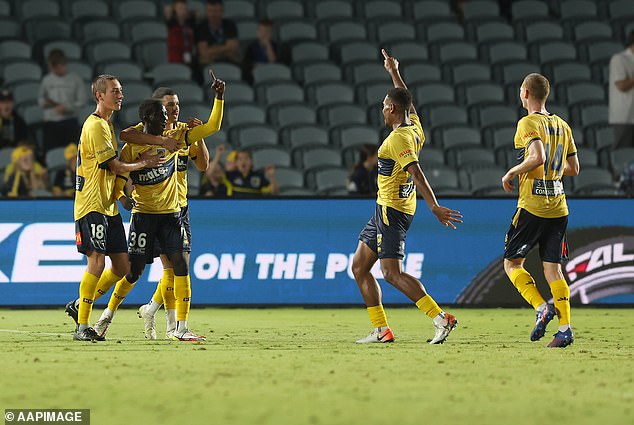 Picking up the ball from inside his own half, Kuol showed Aranda a clean pair of heels to drive towards goal, shimmied onto his right foot past Adama Traore before wriggling free of defensive giants Ronald Araújo and Samuel Umtiti to bear down on Marc ter Stegen between the sticks.

With just the keeper to beat, the 18-year-old dinked the ball over the onrushing German, but his effort drifted millimetres wide of goal. Yet there was enough in that short cameo to demonstrate that this young refugee has something special.

Graham Arnold certainly saw it that way. While it was too soon to call Kuol up for the Socceroos’ play-off clashes with the UAE and Peru, the Mariners gun was on his radar and he earned a call up for the September internationals.

Kuol made his debut against New Zealand, becoming the youngest Australian since Kewell to play for the Socceroos, and showed enough to convince fans that he can be his country’s livewire in Qatar. 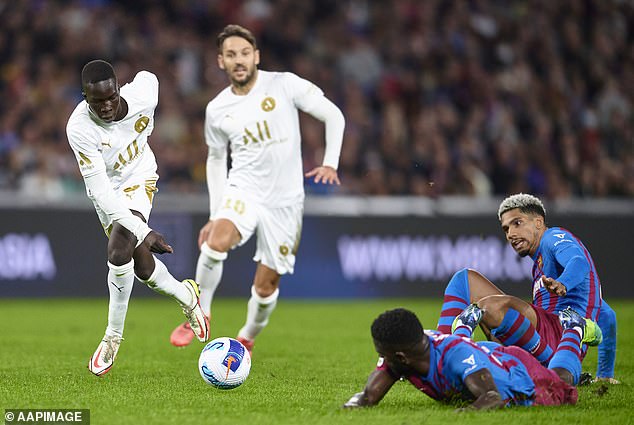 Against Barcelona, he showed what he can do, and went close to scoring a wondergoal

‘He’s in contention. He was something different when he came on (in the recent friendly versus New Zealand) and that’s what we’re looking for,’ Arnold told Code Sports.

‘I’ve shown I’m prepared to take these kinds of risks, and that’s to shock and surprise opponents, but he’s got a long, long way to go.’

Newcastle boss Eddie Howe is also reluctant to effuse too much praise on Kuol, publicly at the very least. The Magpies boss says he will keep a keen eye on the 18-year-old’s progress and a positive World Cup campaign could be rewarded with a fast track move into the first team squad.

‘I’d say, at the moment, the plan would probably be, and these things can change, to go on a loan spell from January,’ he said. ‘Where that is, I’ve got no idea. 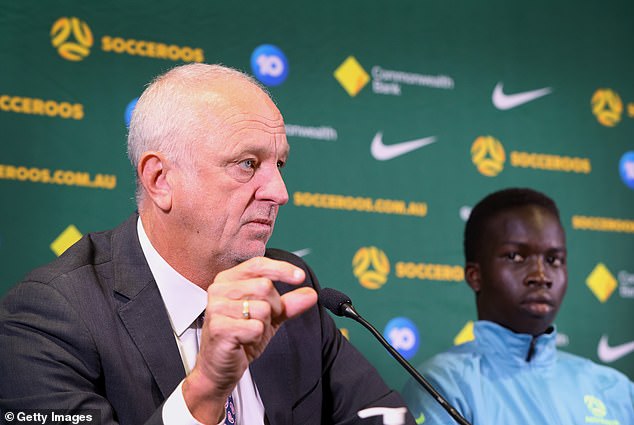 Graham Arnold is keeping a close eye on Kuol, who will surely be Australia’s future golden boy

‘We’re working through various options, but things can change regarding his involvement in the World Cup if he’s selected. There are lots of moving parts to that one as well.’

But he needs to grab that place at the world’s biggest tournament first, and that’s by no means a foregone conclusion. While there is plenty of excitement around Kuol, Arnold is not the type of manager to buckle to public pressure and select a player purely on ‘hype’.

A strong start to the A-League season, then, is paramount. As far as Mariners coach Nick Montgomery is concerned, if Kuol can keep his head down and not fall into the luxuries that inevitably follow young footballers, the sky is the limit.

‘As long as Garang stays away from the partying and the things that can distract young players he’ll thrive,’ the 40-year-old said.

‘He’s a sensible lad, has a good family behind him and his focus has to stay on becoming the best player he can be.’

There may still be twists and turns to come, but everything, it seems, is poised very favourably for young Kuol.