Awkward! Gareth Bale grins through an uncomfortable moment as a fan hands him a shirt to sign at LAFC match… before Welsh star realises it’s his former club Real Madrid’s kit!

Former Real Madrid star Gareth Bale encountered an awkward moment as he was asked to sign his old club’s shirt ahead of an MLS clash on Monday evening.

The 32-year-old signed a one-year deal with MLS’s LAFC last month, bringing an end to a trophy-laden nine years at Madrid.

He helped the Spanish giants win five Champions Leagues but didn’t leave on the best of terms, his final years clouded by limited playing time and a deteriorating relationship with the club’s supporters. 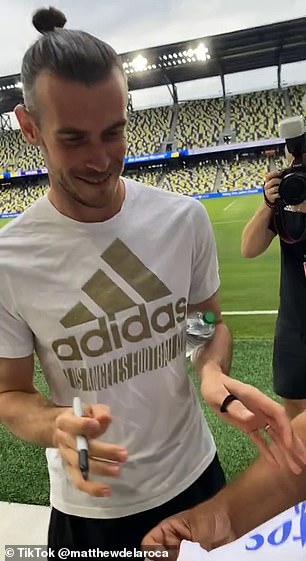 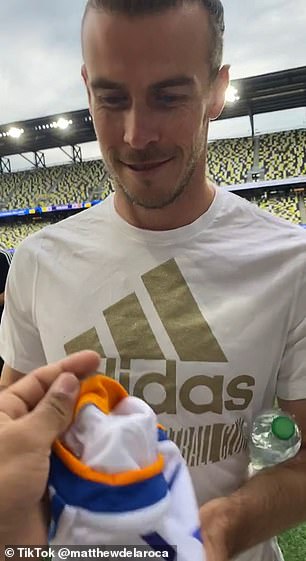 However, one Madrid fan clearly had no ill feelings towards him ahead of Monday’s match against Nashville.

The man presented Bale with a Madrid shirt, asking him to sign it and saying ‘I love you bro’.

Bale looked a little sheepish throughout the interaction before proceeding to sign the shirt and smiling.

He would go on to make his debut as a substitute in the second half, immediately  impressing fans with a skillful backheel as his new club went on to win.

The victory saw LA remain top of the Western Conference, a point ahead of second-placed Austin. 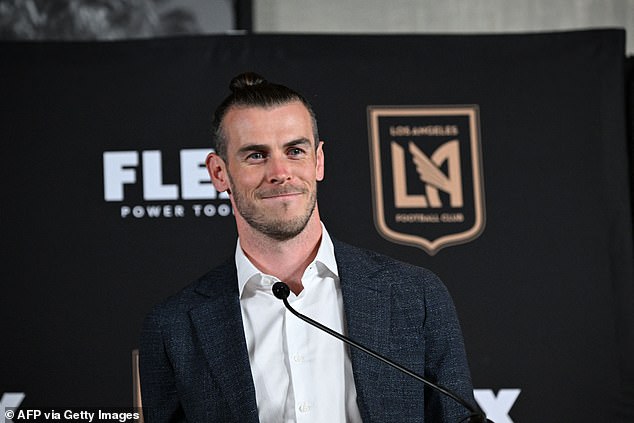