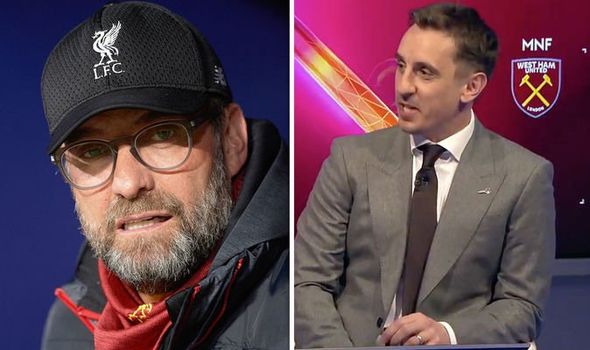 Manchester United legend Gary Neville has chosen two dates he wants Liverpool to be confirmed as Premier League champions on. Ahead of Monday’s visit of struggling West Ham, Liverpool needed just five wins from their remaining 12 fixtures to be crowned as English top-flight champions for the first time since 1990. Jurgen Klopp’s side had opened up a 19-point gap on second-placed Manchester City with a game in hand.

If both Liverpool and City both win their next five games, then it will be the visit of Crystal Palace on Saturday March 21 where the Reds are confirmed as title winners.

However, Neville is determined not to be present at the match where Liverpool are confirmed as champions.

The Sky Sports pundit wants it to work out so that a City slip-up means Liverpool are title winners.

Neville named City’s trip to Burnley on March 14 or the visit to Southampton on April 11 as two dates he wants the inevitable to happen.

JUST IN: Man City could be saved from relegation – because Premier League rivals will help

“I’ve just been given my March and April fixtures this morning and my absolute preference is for Manchester City to drop points at either Burnley or Southampton and hand Liverpool the title because there are no Sky cameras anywhere near it,” Neville said on Monday Night Football.

“They are both Saturday afternoon three o’clocks and I can be at home, relaxed out the way.

“The last place I want to be is in the stadium when they win it.

“I know that doesn’t suit the company and Sky and maybe even Liverpool fans or anybody at home but yeah if City could drop points at City or Southampton that would be ideal.”

Former Liverpool defender Jamie Carragher has also assessed when his old side could be crowned champions.

“The talk almost becomes where it will happen?” Carragher said.

“They just need the five wins so if Liverpool do that you sort of know when they’ll win it.

“You would imagine Everton, Crystal Palace or Man City, I think it will be somewhere in there where it will happen.”

After Monday’s match against West Ham, Liverpool play Watford and Bournemouth in the Premier League before City’s next match away at local rivals Manchester United on March 8.

Liverpool’s trip to Merseyside rivals Everton is on March 16.