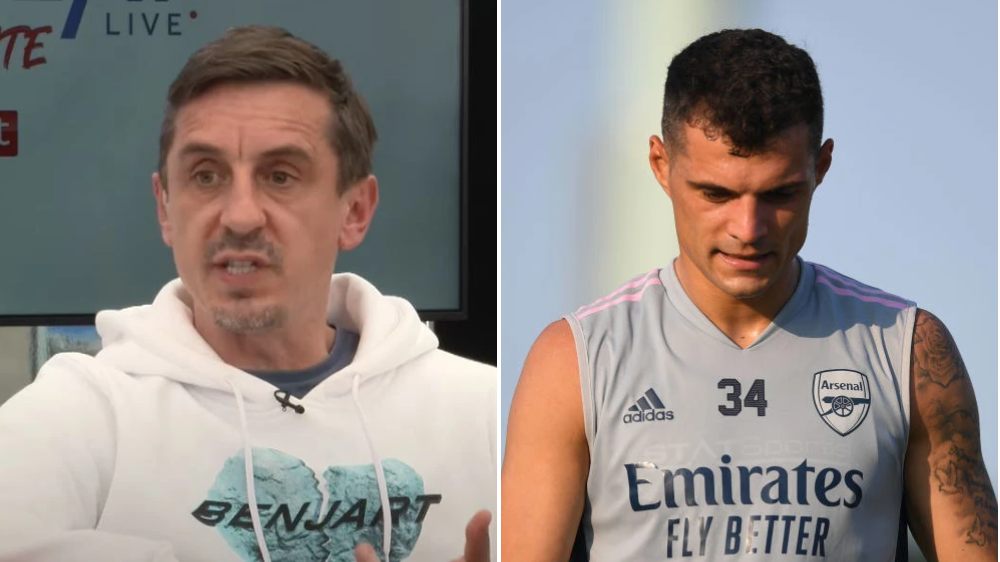 Arsenal midfielder Granit Xhaka has hit back at pundit Gary Neville for calling him a disgrace.

Neville was furious with Xhaka following Arsenal’s defeat to Newcastle in the penultimate game of last season, a result which saw the Gunners surrender their advantage in the Premier League top four race.

Mikel Arteta’s fifth-place side eventually missed out on a Champions League spot for 2022-23, with north London rivals Tottenham securing fourth instead.

Xhaka came out after the loss and appeared to take a jab at Arsenal’s young players, saying: ‘If someone isn’t ready for this game, stay at home.

‘It doesn’t matter your age. If you’re nervous, stay on the bench or stay at home. You need people to have the balls to come here and play.’

Neville responded in his post-match analysis, adding: ‘I don’t know who he’s having a go at, I hope he wasn’t having a go at the younger players…him?

‘I tell you what he’s been a disgrace at times over the last four or five years, getting sent off recklessly. He’s left it up in the air there, that was nothing there.’

Xhaka, though, has now responded to those comments and feels that he was misunderstood.

‘Everyone knows we have a very young team, but this is not the problem of young or old,’ the 29-year-old Swiss international said in a new interview with ESPN.

‘This was not against our young players. I put myself there as well. We were not ready for this game, to fight.

‘We knew if we won this game, we would have another final against Everton at home [on the last day of the Premier League season].

‘The thing is about the mentality – when you have something, you can take it – it is not the first time we let it down.

‘A lot of people start to think, ‘Yeah he’s speaking again,’ and stuff like this, but maybe they didn’t understand what and how I mean it.

‘If I can say now something about this interview, I told you: this has nothing to do with the young players, it is do with us all together.

‘If not, you are out of the Champions League places.’