If new Matildas coach Tony Gustavsson is under any illusions about the scale of the task facing him ahead of the Tokyo Olympics in July, and the World Cup on home soil in two years, he certainly isn’t any more.

Fresh from their 5-2 drubbing at the hands of reigning Olympic titleholder Germany at the weekend, Australia looked for redemption when they took on current European title holders and 2019 World Cup runners-up the Netherlands in Nijmingen on Wednesday. 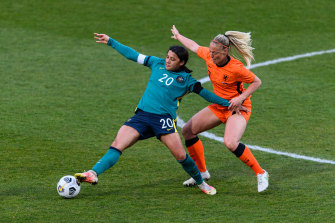 It was never going to be easy taking on such high quality teams as Germany and the Netherlands so the outcome, in the circumstances, was predictable enough although few would have expected the Matildas to concede 10 goals in two games.

They will be better with the marauding Carpenter back in the side and Catley will add defensive experience to the rearguard.

But the reality is that in recent years European nations (outside of the traditional powers like Germany and the Scandinavian nations) have begun to take women’s soccer much more seriously and are pumping investment and development cash into improving the quality of the game from the grassroots up.

The last time an Australian national team coach took on two of the world’s top two teams in quick succession the Socceroos lost to Brazil and France in friendly games, both times by the same 6-0 scoreline. That was back in September and October 2013 as Holger Osieck prepared for the following year’s World Cup.

He got the sack after the last heavy loss: at least Gustavsson can console himself with the thought that fate will not be his as he looks to rebuild this Matildas team and improve its competitiveness for the big tournaments ahead.