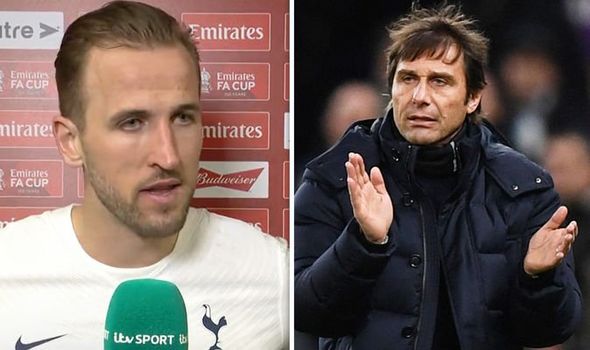 Tottenham star Harry Kane has hailed the impact of Antonio Conte since he became the club’s head coach. Conte led Spurs to a 3-1 win over Brighton in the fourth round of the FA Cup on Saturday. The Italian is attempting to end the club’s 14-year wait for major silverware.

Kane opened the scoring against Brighton with a fine curling effort from just outside the 18-yard area.

Solly March’s own goal doubled Spurs’ advantage and they appeared to be cruising into the fifth round.

Yves Bissouma’s deflected effort brought Brighton back into the game with half an hour remaining but Kane quickly restored his side’s two-goal lead after good work from Son Heung-min.

Spurs were often criticised for a lack of winning mentality under previous boss Jose Mourinho.

Conte outlines what Tottenham can achieve before end of season

But Kane has suggested Conte has made a big impact in that regard.

“I can’t speak highly enough of him, as a coach, as a person.

“He’s really changed the mindset of a lot of players in the team.

“We’re working really hard on the training pitch and we’re seeing the results out there on match days. That’s all the players can ask for.

“Keep working hard on and off the pitch and hopefully we can keep this momentum going.”

Kane was delighted with his first goal and thankful of Son’s impact for the second.

The South Korean’s solo run set up a scrappy finish for the England captain.

“We played really well. We started on the front-foot and missed a bit of momentum in the second half but controlled the game after our third goal.

“I was delighted to see that go in [first goal]. I’m happy to be on the scoresheet.

“It was unbelievable by Sonny [for the second goal]. He has lots of pace and created a big chance and I’m just happy I was able to sneak it home. Everyone played really well. Let’s keep it going.

“There is still a long way to go [this season]. We have plenty of games coming up in the league and cup.”