England defender Harry Maguire has opened up to Sky Sports News presenter Mark Wright about the team’s journey of redemption after the World Cup in Russia, the togetherness in the camp and putting smiles back on faces across the nation with Euro 2020 performances.

Maguire established himself on the international stage at the World Cup in Russia three years ago as England reached the semi-final of the competition for the first time since Italia 90′, before being knocked out by Croatia.

The Manchester United captain admits that was a step too far for Gareth Southgate’s young England side, but says they have come a long way since then and now have the belief needed to go a step further. 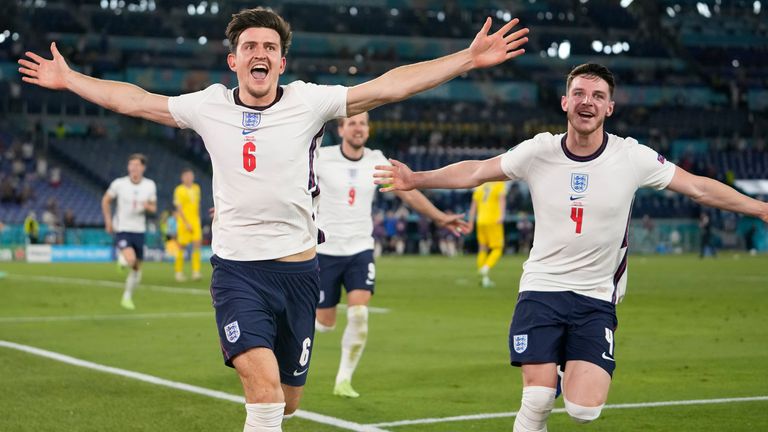 Wright, who is backing Maguire to win Player of the Tournament at Euro 2020, sat down with the centre-back ahead of Sunday’s final at Wembley against Italy to better understand the mood inside the camp.

You’re in the final of Euro 2020, what’s going through your head right now?

I don’t think it’s sunk in that we are in the final. For me, it just feels like we are on this journey, we’re winning football matches, and it’s another game coming up that we have to win. Obviously it’s an amazing experience that we’ve been on, not just this journey, but over the last three or four years. I think ever since Russia we were so disappointed in the semi-final, but we knew at that stage that we just weren’t ready to go on and perform in that semi-final to warrant a place in the final. We knew come the semi-final against Denmark we’d be a lot more focused, a lot more ready and I think the performance that the lads put in was a great performance. We dominated the game from start to finish. Obviously the setback that we had in the game, from a wonder strike from their player on a free-kick, to overcome that was a really important time and stage for us and I think it shows how far we’ve come over the last three or four years.

Why do you think as a group you believe in yourselves so much?

I think one thing that we’ve had throughout this tournament, and we spoke about this before the semi-final, is that we haven’t had a setback. We hadn’t conceded a goal, we hadn’t conceded the first goal so we spoke about how we would react and deal with it because we know the likelihood is that you will have a setback. I think the belief grows over the years that you work together, and you train together. I think a few years ago the belief wasn’t there, when we had that setback in Russia, and I think it’s grown with experience. Like you say, the way that we started against Denmark, the first 15 minutes, I think we started so well, aggressive on the front foot, and obviously we felt the goal came against the run of play. But I think the next 10 minutes after the goal, the reaction from the lads, I think we created two wonderful chances, and we put them under so much pressure that the goal was a matter of time. It was a great goal to score in an important part of the game.

Why do you feel there is such a togetherness in this group?

I think the spirit in the group’s incredible. We’re all rivals when we go back to our clubs, but when we come together we’re a big family. I think that the bottom line is, we all want the same thing – we all want to win for our country. We speak about togetherness in the group but, for me, I feel like it’s not just the group, it’s the country, I really do. I feel like the fans are right with us, they have been for the last three or four years. I feel like everyone’s in this together. That’s not just in the group, I feel like it’s everybody. The journey that we are going on is together, and we all want the same thing, we want to win football matches for our country and we want to be competitive again with the best at the top.

I think the past few years has been tough for everybody, everyone has had their own story, I’m sure people have had it worse than others. For everyone to come together, I really felt like this tournament was an opportunity for us to really bring people together, the timing of it, like you say, we’re over the peak and trying to get back to normality. We’ve seen a stadium which the other day was rocking, with 60,000 people in it, six months ago you couldn’t have imagined that. I feel like this was an opportunity for us to really progress that, in terms of putting smiles back on faces, bringing the energy back to the country and like I say, myself and the lads are so happy that we’ve been able to do that. One more memorable night we need now, and one more push and one big performance to go and do everyone proud and we will do everything we can to do that.