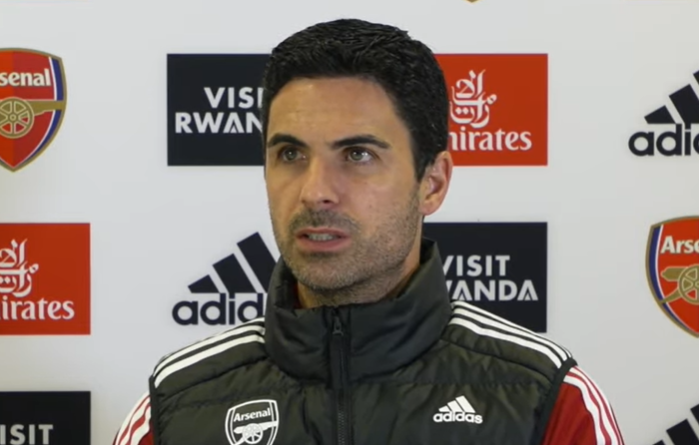 Mikel Arteta has told Ben White to focus on his primary objective and focus on defending ahead of his return to Brighton this afternoon.

The 23-year-old has made an indifferent start to his Arsenal career following his headline-grabbing £50million move from the Seagulls in the summer.

Arteta was keen to invest so heavily in the England international on account of his ability on the ball and passing range. Although White has shown flashes of what his new manager describes as ‘extraordinary potential’ already, he has committed several, worrying high-profile errors.

White was bullied by Ivan Toney during Arsenal’s opening day defeat at Brentford and almost cost his side two points with an underhit backpass at Burnley last month, while he was fortunate not to conceded a penalty against Tottenham last weekend following a rash challenge on Harry Kane.

Speaking ahead of White’s return to the Amex this afternoon, Arteta said: ‘We bought him because we believe that he can be extraordinary. He does not have that much experience in the league still, so he is not mature in that sense, but he has already shown his qualities and what he can do.

‘The way he is adapting to us is impressive so the potential is there. It is how we can fulfil that and help him to do so. He knows that he is going to be asked questions and in this league for sure, because it is one of the most demanding positions, at the moment he is doing it.

‘He needs to defend first and everything we ask of him defensively he needs to do. That’s his biggest task.

‘After that we bought him because he’s got the ability to break lines, to progress the ball the way we want it. He has the composure and calmness to make the right decision. But first of all he needs to defend and I think he’s doing that really well.’

Tags: Arsenal FC, ben white, Mikel A
You may also like
Latest Posts