Hearts 2-1 RFS: Scottish side secure three points against the Latvian side but CRASH OUT of the Europa Conference League after Fiorentina beat Istanbul Basaksehir earlier on Thursday

Mired in such a poor run of results, Robbie Neilson and his Hearts players are entitled to celebrate even the smallest and most inconsequential of victories.

This triumph over the Latvians RFS was the first time that Hearts had tasted victory in well over a month, a run stretching back to a 3-0 win over Motherwell in mid-September.

Indeed, Neilson’s men came into this Europa Conference League clash with just five wins from 18 games in all competitions this season.

Yet, this was a strange old night at Tynecastle. Hearts knew they were out before a ball had been kicked, courtesy of Fiorentina beating Istanbul Basaksehir in the early kick-off. 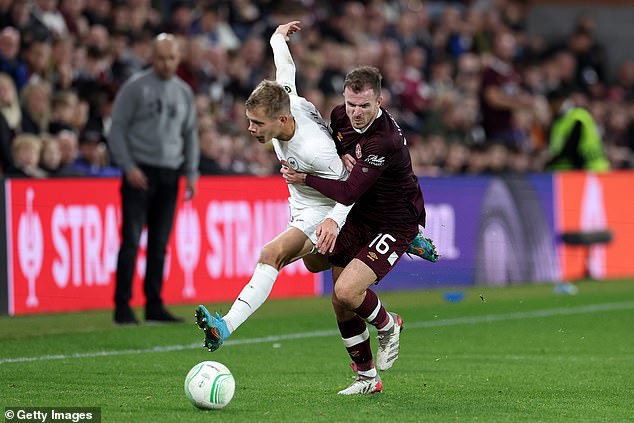 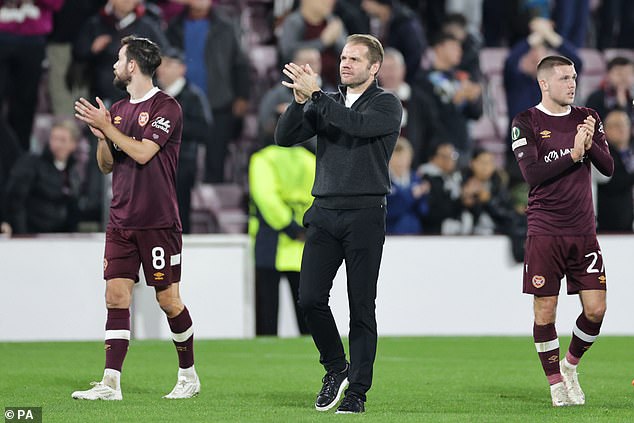 The Scottish side knew they were knocked out of the Europa Conference League  before a ball had been kicked, courtesy of Fiorentina beating Istanbul Basaksehir in the early kick-off

Their elimination had been confirmed and, with only pride left to play for in a dead-rubber, the Hearts fans roared lustily in sheer defiance as much as anything.

Their team raced into an early 2-0 lead after barely 10 minutes, before the remainder of the game became a tense and nervy affair.

They made heavy weather of it in the end, but can console themselves with the fact that victory in this competition earns them a fee of around £430,000 per match.

The downside came with the sight of talismanic defender Stephen Kingsley limping off with what seemed to be a hamstring complaint in the second half.

Neilson’s side have been plagued by some ruinous injury problems this season and it can only be hoped that the injury to Kingsley isn’t overly serious.

Partnering Kingsley at centre-back was Toby Sibbick. In the second half in particular, Sibbick was absolutely magnificent – and he had to be.

The Latvians fought their way back into this contest in a way which few would have thought possible in those early stages when Hearts threatened to run riot.

Even before the final whistle had blown over in Florence, Hearts had already been dealt a blow with more bad news on the injury front.

Cammy Devlin was absent from the team-sheet due to a knock, the Australian midfielder who had excelled with such a tigerish performance against Celtic last weekend. 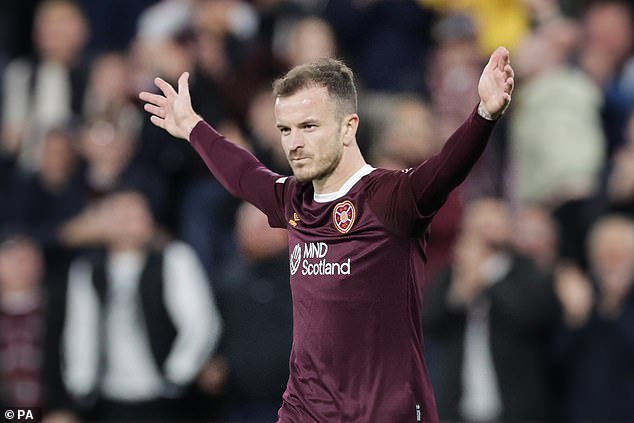 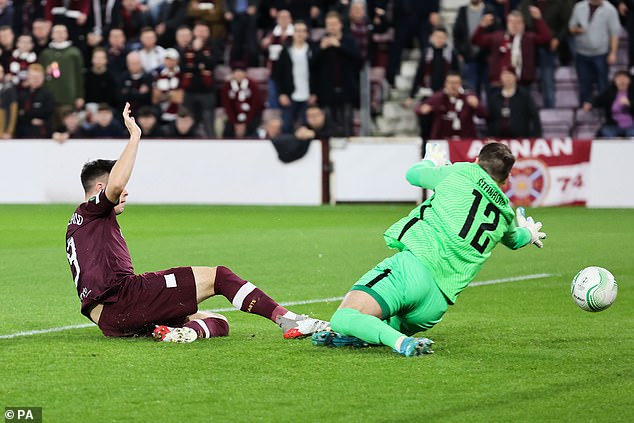 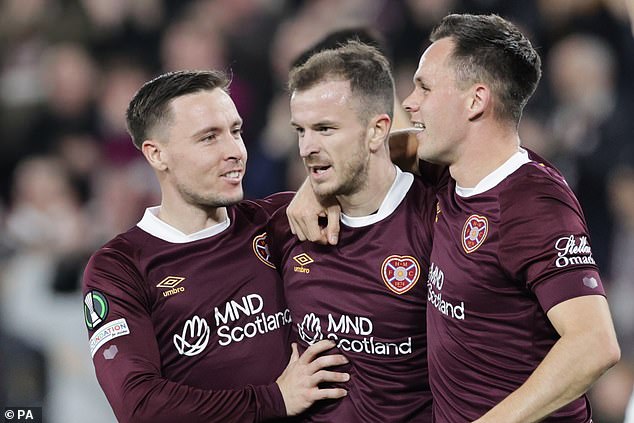 Scorer of a consolation in the 5-1 defeat to Fiorentina a fortnight ago, striker Stephen Humphrys also missed out due to injury.

Lawrence Shankland wasn’t a bad replacement, however, and came into this on the back of netting a hat-trick in the 4-3 defeat to Celtic.

Shankland picked up exactly where he left off last time out. There were just four minutes on the clock last night when he put Hearts into an early lead.

A crisp pass from Jorge Grant sent Josh Ginnelly scampering away down the right flank and in behind the Latvians’ defence. 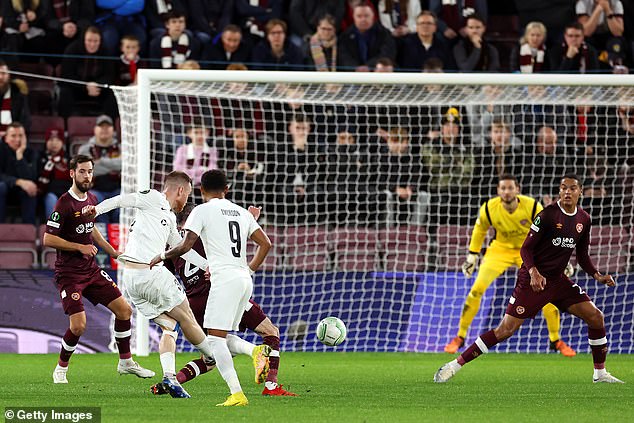 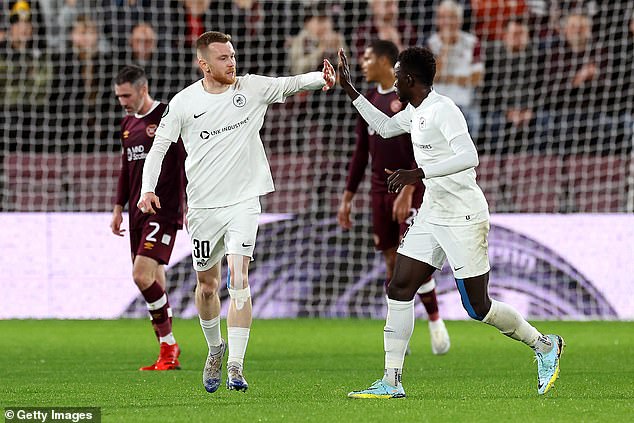 However, Kevin Friesenbichler pulled one back for the Latvian side with a fine powered finish

Ginnelly’s low cross was just begging for a touch – and Shankland duly obliged by sliding in and prodding the ball beyond RFS keeper Pavels Steinbors.

English midfielder Grant was heavily involved in the creation of Hearts’ second goal, which arrived after just 12 minutes.

Grant made a clever run to receive a pass from left-back Alex Cochrane, before laying the ball off to Andy Halliday on the edge of the box.

Halliday took aim and fired towards goal, only for the ball to deflect off RFS defender Vitalijs Jagodinskis and nestle into the net.

Hearts looked to be cruising before the pre-match Bovril had even cooled down. They were operating at a tempo which the Latvians simply couldn’t live with.

Halliday was having a fine game in central midfield and demonstrated why he offers far more to Hearts in that role than when he is asked to deputise as a left wing-back. 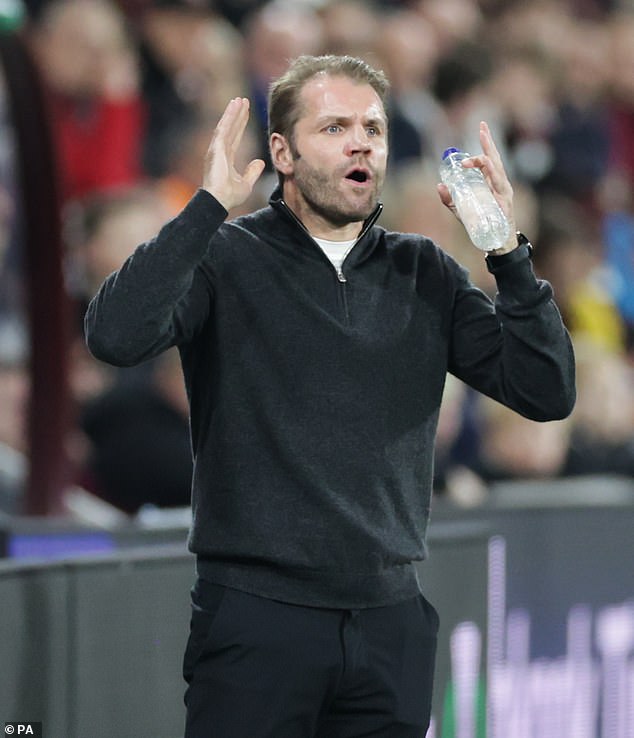 Kingsley almost made it 3-0 on the half-hour. Taking aim with a trademark left-foot free-kick, Kingsley’s effort was bending deliciously towards the top corner only for the flying Steinbors to make an acrobatic intervention and tip the ball over the bar.

RFS almost pulled a goal back on 35 minutes when skipper Tomas Simkovic let fly from distance, the ball taking a nick off Kingsley as it flew just wide of Craig Gordon’s left-hand post.

That served as a warning to Hearts – and the Latvians finally landed a telling blow when they pulled a goal back just three minutes later.

Striker Andrej Ilic headed the ball down and Kevin Friesenbichler gathered on the edge of the box, before letting rip with a piledriver of a shot towards goal.

Even at full stretch, Gordon could get nowhere near it. From a position of early dominance, Hearts all of a sudden started to look nervy.

The crowd had become impatient. Passes were now going astray when they had instead been piercing the RFS defence in those early stages.

Pressing for a third goal, Cochrane curled a shot just beyond the top corner on 55 minutes. But there was always enough pace in the Latvians’ legs to suggest they carried a threat on the counter. 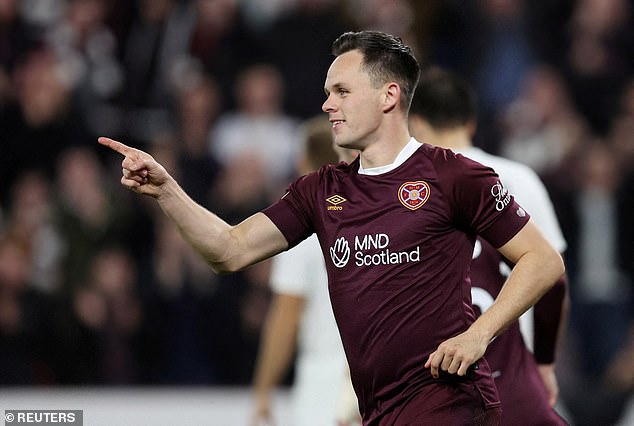 Then, from distance, Friesenbichler thumped the woodwork on the hour-mark, the ball rattling the stanchion of Gordon’s goal as the home crowd breathed a sigh of relief.

Toby Sibbick, who excelled throughout, was required to make a vital intervention just as the lively Ilic was ready to turn and pull the trigger inside the Hearts box.

Hearts just about got there in the end. RFS Jagodinskis was sent off in the closing stages for a crude foul on Euan Henderson.

When the final whistle came shortly after, it was a relief to all. The challenge for Hearts is to now use this to inject some fresh momentum into domestic matters in the Premiership, with a trip to Istanbul rounding off their European campaign next week. 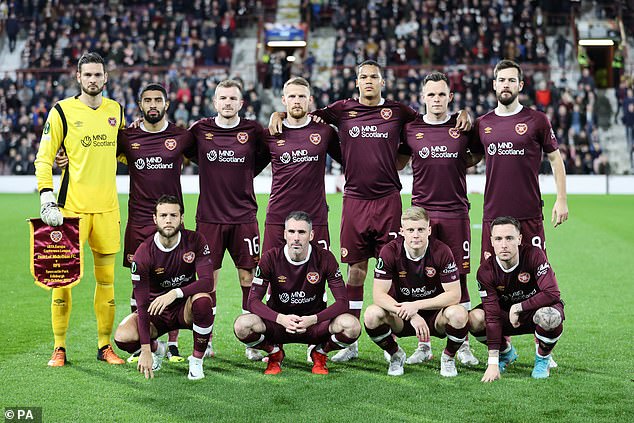