Western Sydney Wanderers are bound for a fourth straight A-League season without finals after a poor 2-1 defeat to Wellington Phoenix that has dialled up the pressure on coach Carl Robinson.

The Wanderers remain a remote mathematical chance of finishing in the top six but will need a miracle for it to happen – and if came, they wouldn’t deserve it, having flunked yet another crucial test on Wednesday night at Bankwest Stadium.

Wanderers coach Carl Robinson and Graham Dorrans react at full-time after losing to the Phoenix at Bankwest Stadium.Credit:Getty

Two first-half goals to Wellington, both conceded from corner kicks, continued Western Sydney’s diabolical handling of set pieces this season, further underlining the doubts over Robinson’s capacity to deliver the success he was brought to the club for.

Robinson joined the Wanderers on the eve of the season after controversially walking out on the Newcastle Jets, and was aiming for a top-four finish, if not top two.

Instead, they sit ninth on the ladder, five points adrift of sixth spot with only two more games to play, having won just two of their last 11 matches.

Despite being given significant scope to reshape his squad to his liking in the transfer market – including the recent additions of ex-Jets star Steven Ugarkovic and former Socceroo Scott McDonald – Robinson has been unable to turn Western Sydney into a consistent threat. 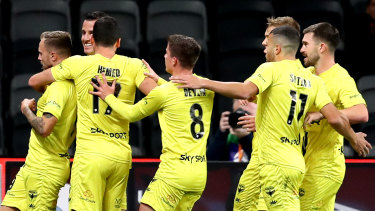 David Ball celebrates scoring for Wellington from a corner. The set piece has been the Wanderers’ Achilles heel this season.Credit:Getty

The Wanderers have not qualified for the A-League finals since the 2016-17 season, their last under foundation coach Tony Popovic.

They were fortunate to finish this match with 11 men on the park, with defender Ziggy Gordon escaping a caution for a scything tackle early in the first half on Olyroos star Reno Piscopo, who was forced off with a shoulder injury after just 15 minutes and could be in doubt for Tokyo.

Gordon was yellow-carded later in the second half, but a stricter referee than Kurt Ams may have given him his marching orders much earlier.

Undeterred by the loss of their most creative player, the Phoenix capped off a period of dominance by taking the lead in the 24th minute through David Ball. Clayton Lewis’ corner delivery was flicked on by Graham Dorrans, whose header struck the crossbar and then fell into Ball’s lap at point-blank range.

Reno Piscopo leaves the field after a scything tackle from Ziggy Gordon.Credit:Getty

The hosts rustled up a response just five minutes later through midfielder Keanu Baccus, whose strike from the top of the box found its way into the back of the net through a mess of bodies after a post-corner scramble.

Three minutes before the break, Wellington went ahead again as Tomer Hemed nodded home another corner to score his ninth goal from 12 games.

A seething Robinson told Fox Sports as the second half began that he had just delivered some “home truths” to his players about the quality of their defending, and they responded with an improved performance.

Keanu Baccus of the Wanderers competes with Cameron Devlin for the ball.Credit:Getty

Though they dominated possession and territory for the remainder of the match – aside from an early onslaught from the Phoenix just after half-time – the killer touch in the final third eluded them, with Thomas Aquilina, Ugarkovic and McDonald among those guilty of spurning good chances to equalise.

Some resolute defending from Wellington kept them at bay, and their efforts went right to the wire, highlighted by a last-ditch block from Tim Payne, who stuck his foot out to deny Tate Russell as he looked certain to score from close range in added time.

The Phoenix are now seventh in the A-League and face the two teams either side of them, Perth Glory and Macarthur FC, in the next two weeks.

Tags: Al, as, Heat, on, Phoenix, Robinson
You may also like
Latest Posts