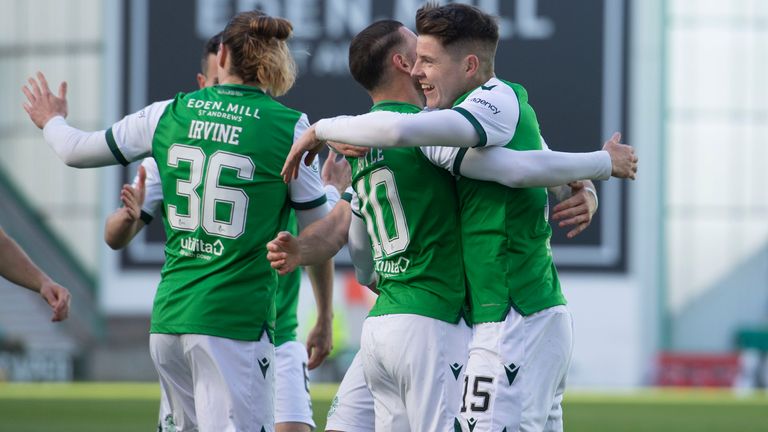 Hibernian strengthened their grip on third place in the Scottish Premiership after Kevin Nisbet and Martin Boyle scored in a 2-1 victory over Livingston.

Scotland striker Nisbet grabbed his 17th goal of the campaign after just seven minutes before Boyle doubled the home side’s lead with a penalty.

The visitors scored a spot-kick of their own through Jay Emmanuel-Thomas with five minutes left – reward for a vastly improved second-half display.

Hibs went into the game without Josh Doig, one of two changes to the team that beat Stranraer in the Scottish Cup on Sunday, after the highly-rated left-back sustained a shoulder injury at the weekend.

However, that did not upset the balance to the Leith side after Jack Ross’ team stormed into a two-goal lead inside 26 minutes.

The opener arrived following a flowing move that carved open a static Lions rearguard. Paul McGinn played in Boyle and the winger, who could have shot himself, played a pass along the six-yard box for Nisbet to tap in.

Livingston, who were likely feeling the effects of Saturday’s penalty shootout defeat to Aberdeen in the cup, had offered very little going the other way and the hosts doubled their advantage from the pot through Boyle.

He dusted himself down having won the spot-kick after going down under a challenge from Efe Ambrose before sending goalkeeper Max Stryjek the wrong way.

Hibs continued to press and Livi goalkeeper Stryjek had to look lively to get down to Nisbet’s low drive at his near post before watching Jackson Irvine head wide from the resulting corner.

Martindale then brought on Alan Forrest at the break as the Lions looked to get a foothold in the game.

Craig Sibbald did briefly threaten with a low deflected drive from 20 yards that forced Ofir Marciano into a save.

Another of Livingston’s substitutes, Matej Poplatnik, almost made an immediate impact after coming on in the 67th minute when he directed Nicky Devlin’s cross just wide at the far post.

The visitors were vastly improved as Hibs struggled to match their opponent’s energy levels and Forrest hooked a shot wide from inside the area when he should have scored.

Livi did score from the penalty spot after striker Emmanuel-Thomas was felled by Kyle Magennis in the box but it was too little, too late.

Hibernian boss Jack Ross: “We’ve secured top four tonight, which at one point we might have been lauded for. But it kind of goes under the radar, even from me. I’ve not really talked about it inside because we’ve been there all season and we want to win the Scottish Cup.

“So, I’m sure, in the fullness of time, we’ll sit back and reflect, say we’ve already done good things this season. But we want more.

“It’s incredible how qualifying for Europe is not something we’ve even spoken about tonight. It’s only now, as I’ve come out, that I realised it. That’s just about how we’ve pushed to improve the ambition of this team.

“What they’ve done already is good and they deserve credit for it. But we want to achieve something that is very good – and we have the opportunity to do that.”

Livingston manager David Martindale: “The first half killed us. We gave away a cheap goal, albeit a good goal from a Hibs perspective.

“I think the shape – or the personnel within the shape – killed us. I got that wrong, I got the starting XI wrong, the shape wrong in the first half.

“I tried to change that in the first half but by that point it was too late. I got the boys in at half-time, told them in no uncertain terms what I was looking for, changed the shape, changed the personnel and in the second half they deserve massive credit.”

Hibs host Motherwell in the Scottish Cup fifth round on Saturday; kick-off at 5pm.

Livingston are next in action on May 1, hosting Aberdeen at the Tony Macaroni Arena; kick-off at 3pm.