USA face Holland in a HUGE last-16 clash at the 2022 World Cup on Saturday… but what time is kick-off? What TV channel is it on? What is their head-to-head record? And what is the team news?

The United States booked its place in the last-16 of the World Cup with a victory over Iran on Tuesday, but the hard work is far from done for Gregg Berhalter’s men.

The US now faces Holland, which topped Group A ahead of Senegal, with both sides desperate to keep their tournaments alive for as long as possible.

Lying in wait in the quarter-finals is winner the of Argentina vs Australia, but first it’s the small matter of Saturday’s round of 16 clash.

With the game fast approaching, Sportsmail takes you through everything you need to know below. 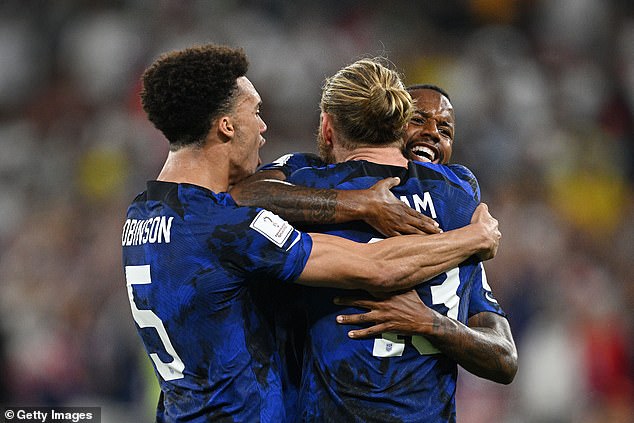 The game is on Saturday, December 3 at the 45,000 capacity Khalifa International Stadium.

HOW TO WATCH THE GAME

Fox Sports are broadcasting all the World Cup game in the US, meaning Alexi Lalas, Clint Dempsey and Landon Donovan will be on hand to analyze how the game unfolds in Qatar.

US: Fox Sports, Telemundo and Peacock

UK: BBC One and BBC iPlayer

Australia: SBS and SBS On Demand The Netherlands topped Group A, beating Senegal and Qatar, and drawing with Ecuador

WHERE IS THE GAME BEING PLAYED?

The USA’s clash with Holland takes place at the Khalifa International Stadium, one of the few arenas not purpose-built for the World Cup.

The stadium has a capacity of 45,857, and recently hosted the 2019 Club World Cup. It will also be the venue for this year’s third-place playoff, the day before the final.

The Netherlands have already played once at the stadium during the tournament, but it was the only game they failed to win – drawing 1-1 with Ecuador in their second fixture. Netherlands will return to the Khalifa International Stadium, where they drew 1-1 with Ecuador

The Manchester United target is yet to play in the tournament, and now appears to be a severe doubt for the last-16 clash as he continues to be assessed by medics. Christian Pulisic quite literally put his body on the line against Iran, bundling the winner in but getting injured in the process.

He was taken off at halftime after initially trying to continue, but ended up going to hospital after the game. While he was there, he posted a selfie celebrating the victory, and insisted he will be ready for Saturday’s big one against the Netherlands.

Aside from that, it’s tactical decisions rather than injury concerns for Berhalter.

Once again, it will be all eyes on Gio Reyna after he was once again left on the bench for the Iran game. Will the 19-year-old get some more game-time in the knockout stages? 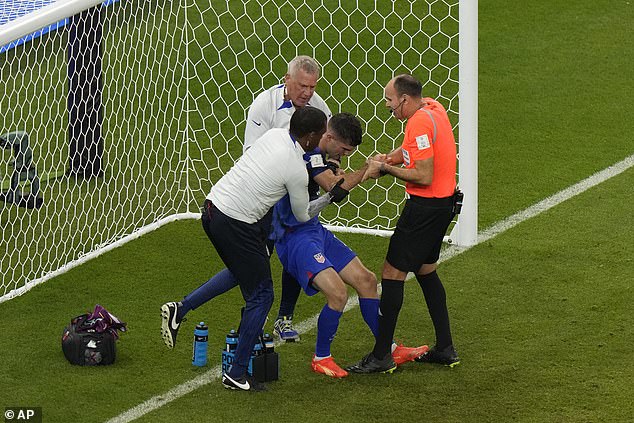 Christian Pulisic put his body on the line – quite literally – against Iran, injuring his abdomen

The two sides have met five times in the past, but never in a competitive fixture.

The last time they played, though, the USA got their revenge, winning a thriller 4-3 in Amsterdam. The USMNT would snap your hand off for a similar result on Saturday.