Despite all the (justified) hype about a new broadcast deal with Ten and Paramount+, a shiny new all soccer website (keepup.com.au) financed by the club-owned Australian Professional Leagues and a seasonal kick-off that has coincided largely with fans being allowed into stadia, those who have followed Australian soccer for years knew that things were unlikely to run smoothly right from the first whistle.

And so it proved, with Macarthur FC, one of the league’s newest franchises, being forced to move their game against Wellington from their south-west Sydney home ground at Campbelltown Stadium to Newcastle because of the unplayable nature of the pitch: not so much a greensward, more a cow paddock, with the club laying the blame entirely at the feet of the local council. 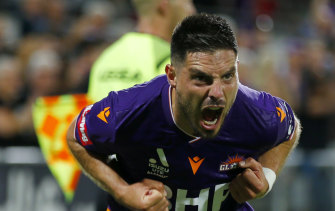 The new broadcast agreement is a big deal for the competition, particularly as Network Ten, unlike so many previous soccer broadcasters (Seven in the past, Fox in the latter stages of its increasingly unhappy marriage with the game), seem genuinely interested in building up the game.

So it was unfortunate that the first night’s streaming service on Paramount should be dogged by technical issues, which provoked a steady stream of complaints and ironic tweets on social media, particularly about the coverage of the Western United v Melbourne Victory match in Geelong.

The nature of modern society, of course, where blame and criticism is the default option, ensured that the broadcaster would be cut no slack for first-night teething problems.

It’s likely the majority of Victorian viewers would have been tuning in to the Victory v Western game on Paramount+, which kicked off at the same time as the Sydney match.

The action began predictably on the pitch. For the first 45 minutes of their match against Brisbane Roar at AAMI Park on Friday night, Melbourne City picked up where they had left off when they landed the Premiers Plate/Championship double last season.

City dominated possession, raced to a 2-0 lead and looked home and hosed. But a spirited Roar fightback caused palpitations on the champions’ bench and only a marginal off-side call to deny a Roar equaliser preserved City’s advantage.

The Tony Popovic reign got off to a flying start against Western United when Victory, despite producing a far from vintage performance, grabbed all three points courtesy of a near-post header from a Jake Brimmer corner by new Portuguese defender Roderick Miranda.

Western boss John Aloisi was not, however, too downhearted, claiming to have seen plenty of positive signs for the future in his team’s equally gritty effort. In giant Swiss defender Leo Lacroix , Aloisi looks to have found a real defensive stalwart. 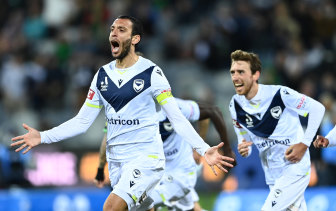 Miranda celebrates scoring a goal during the A-League match on Saturday night.Credit:Getty Images

Perth Glory coach Richard Garcia waited until the game had almost finished to give marquee man Daniel Sturridge a debut in front of a packed house at HBF Stadium as Glory and Adelaide played out an entertaining 1-1 draw. It was old stalwart Bruno Fornaroli who delivered for Glory, thumping home a long-range blockbuster to grab an equaliser after Kusini Yengi opened the scoring for the Reds.

The atmosphere was rocking, but Glory now face a long stretch of games on the road as the McGowan government’s heavy COVID restrictions make it difficult to play games in WA.

The Sydney derby was the most heavily hyped game of the weekend but it failed to live up to the advanced billing and ended scoreless, both sides denied by fine goalkeeping or an inability to create and finish chances.

Goal of the round

Fornaroli’s audacious long-range effort from well outside the penalty area beat Adelaide goalkeeper James Delianov all ends up, as it might have every other keeper in the league. Honourable mention to Mariners 18-year-old debutant Jacob Farrell, whose diving header put his side 2-0 up against Newcastle in the F3 derby.

Save of the round

A few goalkeepers showed themselves to good effect, but the nod goes to the Wanderers’ Spanish shot-stopper Tomas Mejias for his diving save to deny Sydney frontman Adam Le Fondre’s long-range effort. 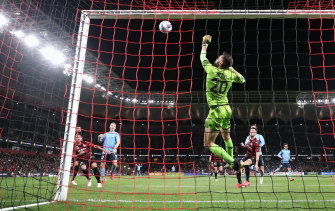 Glory’s former Socceroo goalkeeper Brad Jones almost gave a goal away with a sloppy pass out from the back which presented Adelaide’s Kusini Yengi with a great chance he ultimately spurned. Jones, making his debut for his hometown club, redeemed himself later with an excellent save to keep out Craig Goodwin’s close-range shot.

Popovic’s teams are characterised by their structure and order, and their hard-nosed defensive solidity. With an opening-night clean sheet it looks like he has already transformed the porous Victory defence – which conceded 60 goals in 26 games last season – into a much tighter unit.