The Green Revolution: How lucky suits and Nando’s are helping Argyle thrive as chairman Simon Hallet insists the club ‘is a chance to give something back to Plymouth taxpayer’

The upstanding citizens of Plymouth may have moaned in the late 1960s and early 70s when their rates bills landed on their door mats.

What they could not have known is that, decades later, doing their civic duty has helped get the city’s Green Army on the march.

‘I come from an era where your education was paid for by local councils,’ explains millionaire Simon Hallett, chairman and owner of League One leaders Plymouth Argyle. 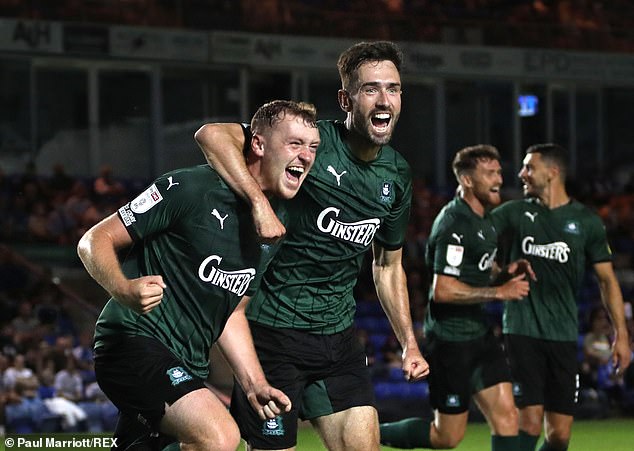 The backstory is almost as beautiful as the current one. Something as dramatic as the breathtaking coastal surroundings is happening in an often-forgotten, faraway corner of the country.

At a noisy Home Park during a 3-0 trouncing of Bolton on Tuesday, a crowd of almost 13,000 raised the roof. The win was Argyle’s 13th League match without defeat. 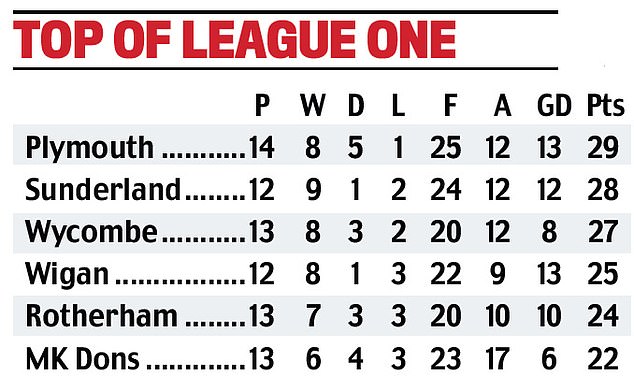 Hallett took control in August 2018 and what he describes as ‘a wonderful confluence of philanthropy and great fun’ has ushered in a new era.

‘We have a real, overarching strategy,’ explains chief executive Andrew Parkinson, who also arrived in 2018. ‘A sustainable Championship club — everyone has that through them like a stick of rock.’

Parkinson saw enough potential in Devon to persuade him to leave Liverpool, where he had been operations director. For Ryan Lowe, their manager raised in the shadows of Anfield, it was similar. 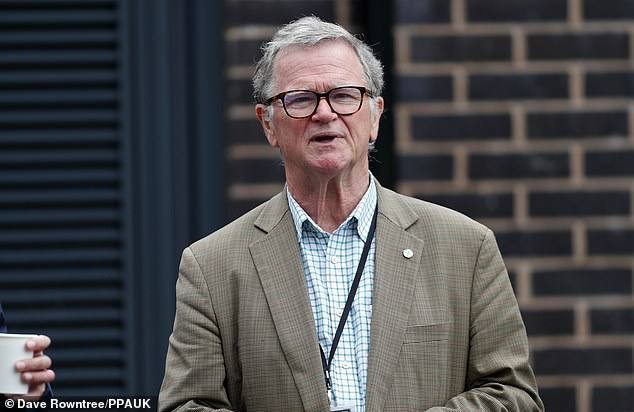 ‘The potential was one of the main reasons I came down,’ says Lowe. ‘Simon asked me what I thought of Plymouth Argyle. I thought it might get me into trouble but I told him, “Big club, no ambition”. Now it has ambition. The fan base is phenomenal. Everything is rising. We want to bring the good times back and we are doing that, probably faster than some might have thought.’

Lowe, a former striker, makes no secret about his style. ‘Often but not always 3-5-2, possession-based, on the front foot,’ he says, although there is a moment of panic when the photographer comes into his office and snaps away. ‘You’ll need to take them again,’ he says, before wiping the white board clean. ‘My corner routine is on there!’ 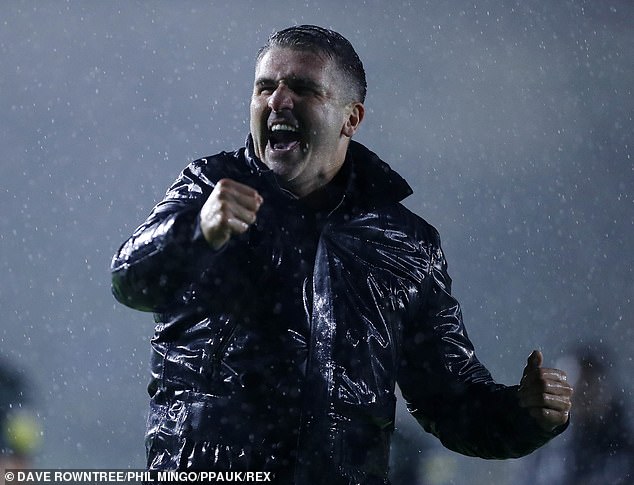 Former striker Ryan Lowe manages based on a possession-based, on the front foot style

Trevor East, the former head of Sky Sports and ITV Sport, is on the board. His vast contacts book opens doors, while his natty green, Austin Powers-style corduroy suit acts as a lucky omen.

‘My wife bought it for me after the first game of the season, which we lost, and we haven’t lost since I’ve had it on,’ says East. ‘They won’t let me take it off now.’

Keeping everyone smiling is top of Hallett and Lowe’s agenda. ‘I have kids,’ says the owner. ‘I know their problems. Footballers are young men with demons, they’re under a lot of scrutiny — especially in Plymouth. They’re a long way from home and we have a duty of care because of our location.’

Lowe does not issue fines for rule breaches. ‘I hated that,’ he says. ‘I don’t need money from players.’ Instead, offenders have to take the squad to Nando’s. ‘I order a whole chicken, the works,’ says Lowe. ‘Even if I don’t want it.’ 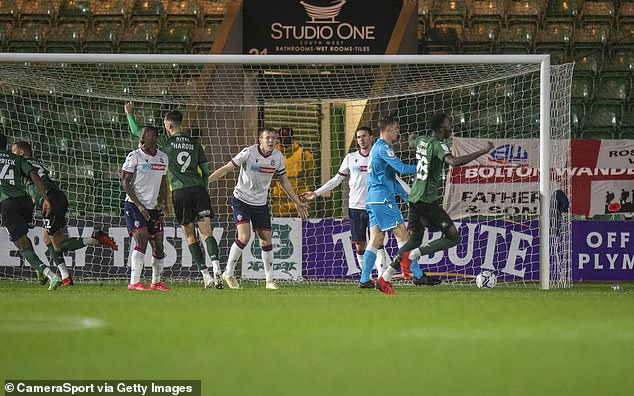 Lowe and assistant manager Stephen Schumacher, another Liverpudlian, are joined by director of football and fellow scouser, Neil Dewsnip, who worked as a youth coach for 17 years at Everton.

The relationship is close. ‘I crash at Ryan’s apartment a couple of times of week,’ Dewsnip says. ‘If we win, it’s great. We’ll have a good talk, a glass of wine. If we don’t, he’ll sulk, go to bed early and I’ll watch telly without the wine.’

Recruitment is key. ‘The owner made a fortune out of data analytics and thinks it can apply to football,’ Dewsnip says. ‘We trialled two or three firms and came up with one we are comfortable with because they speak football. We play a certain way. We look for players who have the characteristics to fit that. The data flags that up.’

I ask what they look for. ‘Let’s just say we have a criteria,’ says Dewsnip. He is more open about the emphasis put on the academy system. ‘If you’re born in Land’s End and you’re the next Wayne Rooney, it’s two-and-a-half hours to your nearest club,’ he says.

‘So you’re probably going to become a surfer “unless”. We’ve dealt with the “unless”. To expect parents to come here three times a week from darkest Cornwall is unrealistic. We have two centres now, one in the east and one in the west.’ 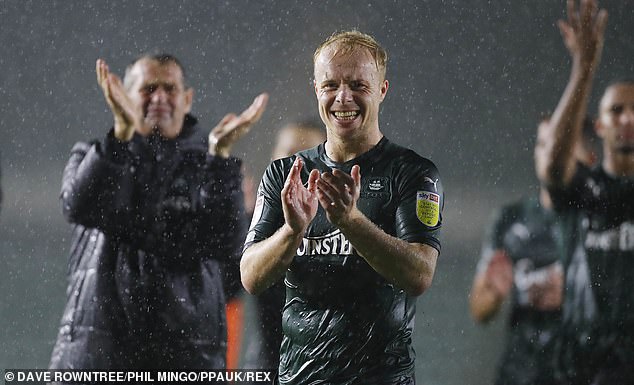 Ryan Broom celebrates his side’s thumping 3-0 win  in front of a crowd of almost 13,000

Dewsnip was behind summer Zoom chats between Lowe and England coach Gareth Southgate, and Schumacher and Southgate’s assistant, Steve Holland.

The manager lapped it up. ‘If Gareth can rotate his team with a squad of multi-millionaires, why can’t I do it with Plymouth players? Hate me today love me tomorrow, is what I say. They’re disappointed but I always tell them my reasons. You have to be honest with your players.’

Honesty is everywhere. As financial catastrophe sweeps through the EFL, Hallett’s transparency is refreshing. It comes to the fore again when I ask if they could aim for the Premier League. ‘I won’t take that gamble,’ he says. ‘We’d need an investor with more money than me. I want to leave this club in a better shape than when I took it on.’

Again, he returns to that sense of responsibility formed years ago. ‘Our resurrection is loosely correlated with the resurrection of Plymouth,’ he says. ‘It reinvented itself from the dockyards to be Britain’s ocean city.

‘I’m a cold-blooded, free market, capitalist pig but Plymouth seems a mix of business opportunities and great planning by bureaucrats. It swings from one party to the other but there’s a commitment to getting things right. It’s on the up, just like the football club.’

Tags: and, How, lucky, Nando&apos, suits
You may also like
Latest Posts