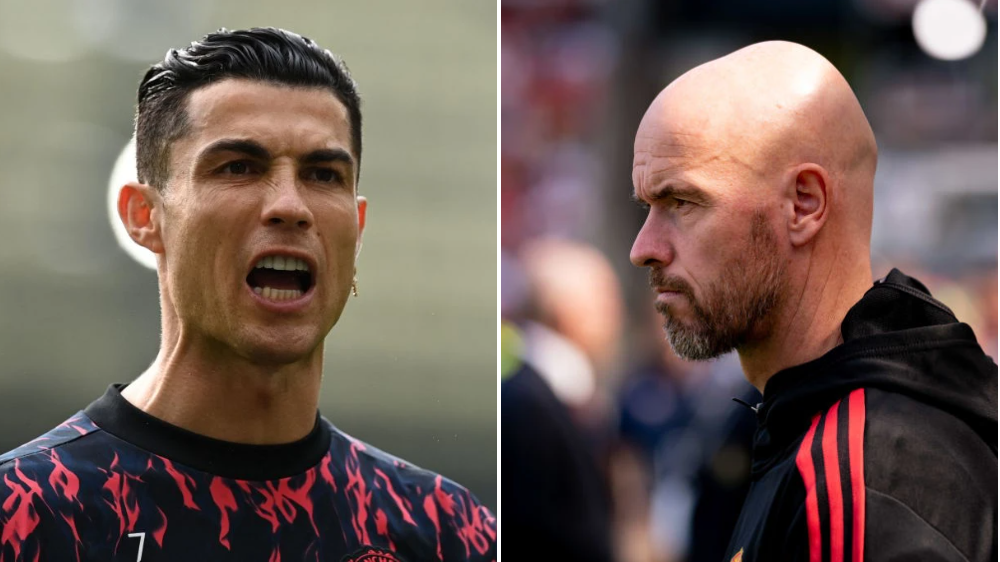 Cristiano Ronaldo’s relationship with Erik ten Hag has hit rock bottom, with the Manchester United striker said to be ‘furious’ with the club’s new manager.

Ronaldo made his first pre-season appearance against the Spanish side but was pictured leaving Old Trafford before the final whistle after being subbed off at half-time.

‘We are a team and that means you stay until the end,’ Ten Hag told Viaplay. ‘This is unacceptable, for all those involved.’

The Daily Star say Ronaldo is ‘furious’ with Ten Hag’s public criticism and now wants to leave Manchester United more than ever.

Ronaldo returned to Old Trafford last summer and scored 24 goals in 38 appearances for the Red Devils during the 2021-22 season.

But the Portugal star informed United of his desire to leave earlier in the summer as he is desperate to play in the Champions League.

Offers from rival clubs have not been forthcoming but Ronaldo looks set to renew his efforts to leave following Ten Hag’s criticism, with the pair’s relationship now said to be at rock bottom.

It has already been claimed that Ten Hag has decided to bench Ronaldo for Manchester United’s Premier League opener against Brighton on Saturday.

While Ronaldo continues to push for a move away from Old Trafford, his former United team-mate Louis Saha claims he is ‘only thinking about himself’ and has ‘unrealistic’ expectations.

‘In some way, from Cristiano Ronaldo’s point of view it’s a bit unrealistic to ask now a club of this size to adapt to him and his dream,’ Saha told Sky Bet.

‘I think that last year he had been in Juventus but they hadn’t won the Champions League. I’m not Cristiano but as someone who seems to be a supporter of Manchester United, I have felt like he hasn’t shown completely enough of that, he is thinking about himself.

‘I am not going to judge him because he is an immense player and I’m not in his position, but I would have loved him to stay because he’s a terrific player. No-one can judge his actions at this moment because it’s his own career.’