Inter Milan 4-0 Viktoria Plzen: Serie A giants ease into last 16 of the Champions League – and send Barcelona crashing out in the process – with comfortable victory over the Czech minnows

Inter Milan booked their place in the last 16 of the Champions League by sweeping aside Viktoria Plzen in a victory that confirmed Barcelona’s elimination at the group stage.

A double from Edin Dzeko, Henrikh Mkhitaryan’s first-half header and a late Romelu Lukaku strike sealed the home side’s progression into the knockout rounds as Xavi’s Barcelona team watched on from afar before playing Bayern Munich later on Wednesday.

The result sends Barca crashing out of Europe’s premier club competition at the first hurdle for the second consecutive season.

Xavi and his men would not have been expecting Plzen to get a result – they have now lost all five of their group games – but their feint hopes were dashed when Mkhitaryan scored 10 minutes before half time. 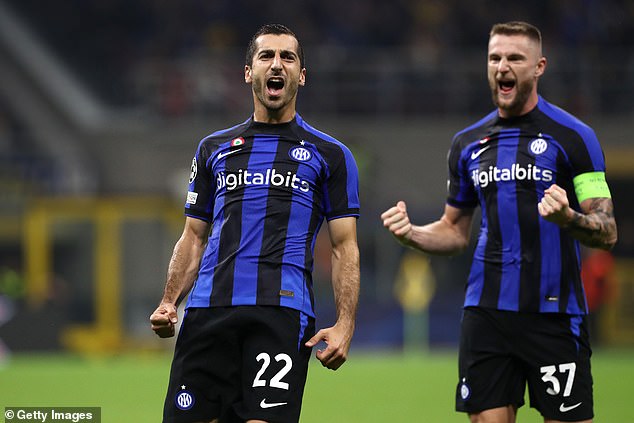