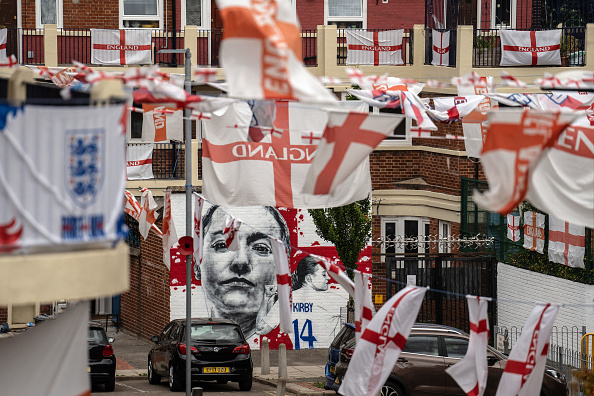 ‘No-one wants to see a goalie score a goal.’

BBC co-commentator Rachel Brown-Finnis made this statement in the dying moments of extra time during the Women’s European Championship quarter final between England and Spain, after Spain goalkeeper Sandra Paños came up for a free kick.

The remarks caused something of a furore online, with plenty of fans pointing out that the rare sight of a goalkeeper scoring would be exactly what they want to see.

It’s reasonable to think that the sheer chaos of what we’d all witnessed in the previous 117 minutes made her misspeak and exclude the salient information that no-one wanted to see England concede at that moment.

I was tense, quite literally on the edge of my seat. The thought of conceding a goal to a goalkeeper was almost too much to handle.

It was the culmination of two weeks of utter, riotous joy supporting England Women, the Lionesses, on home soil.

England’s campaign began with the opening game in Manchester, in which they beat Austria 1-0, and continued with the record breaking 8-0 thrashing of a decent Norway side and then a cool 5-0 against Northern Ireland. This is a team to love and treasure.

As a woman who’s long been into the men’s game, from writing match reports for fun aged seven then many years later starting a weekly football newsletter in the embers of the pandemic, I’m ashamed to admit that I’ve only recently got up to speed with the women’s game.

It’s mostly been down to Twitter and the fantastically enthusiastic and knowledgeable advocates for women’s football who’ve become part of my online circle, that encouraged me to develop a love and passion for both sides of the game.

When you’re surrounded by cheerleaders you can’t help but be caught up in the hype.

It helps that it’s easier than ever to dip your toe into women’s football, thanks to domestic TV deals; every day it feels like more people are getting involved or taking an interest.

Women’s football, more than the men’s game, espouses the notion that football is truly for everyone

Undoubtedly, the cherry on the cake has been a home tournament.

The best women’s teams in Europe have congregated here in England to fight it out for the 13th UEFA European Women’s Football Championship.

I was at the opening game in Manchester on July 6 at one of the true global icons of football, Old Trafford, alongside almost 70,000 others.

It was wonderful. We were sat among family groups, friend groups, new fans, old fans, people of all ages, genders and sexualities.

Positivity zinged through the crowd, with everyone cheering and clapping and enjoying the pre-game atmosphere created by the DJ and the opening ceremony. Being there, I felt like I was part of something historic.

That’s not to say that women’s football should be categorised as sweet, friendly or even soft, an accusation I’ve seen levelled at the game.

There needs to be edge, passion and aggression on the pitch (which we saw in abundance during England’s quarter final), team rivalries need to exist and officials and managers need to be questioned – but what’s nice about attending the games is that there doesn’t feel like there’s any underlying menace.

In my experience, men’s football unfortunately often has an unpleasant edge to it, meaning you may spend time feeling nervous that something nasty might kick off.

This acts as a deterrent for people, especially those from minority groups who rightly worry they could be targeted but who may otherwise find joy in watching the game live.

Women’s football, more than the men’s game, espouses the notion that football is truly for everyone, despite progress needed in areas like diversity.

We saw last year with the England men’s team during Euro 2020 that having a group of happy, open-minded, media savvy players who seem to gel and are genuine friends can make a huge difference to the goodwill the country affords the national team, even when they get pipped to the post for the big prize.

This group of women are no different.

They’re a delight to watch off the pitch as much as on it and crucially, appear to be having the time of their lives.

They’re warm, funny and honest about their experiences and they all pass the test of whether you would go for a pint with them, including manager Sarina Wiegman.

That they are successful is also important. This tournament has, for the most part, silenced the critics of women’s football and is providing important impetus for the game.

These players are providing inspiration to the thousands of young girls flocking to see them, showing them that football is a valid path for girls too while the entertainment value keeps a broad range of support engaged.

And I’d include myself in that broader support.

At the beginning of the tournament I had no idea just how invested I’d become in these players and the tournament as a whole but here I am, even more excited and enthused the longer it’s gone on.

The kudos winning a trophy brings, if it happens, will hopefully see an increase in funding and sponsorships allowing the game to continue flourish, helping it to professionalise further and diversify as much as the men’s game.

Whether England become European Champions or whether the Lionesses go out in the semi-final, this generation of players will leave a lasting legacy of support behind them and that is surely something to celebrate.

Either way, I’ll be cheering them on with pride.