Italy are unbeaten in their last 33 matches in all competitions, their longest unbeaten stretch of matches in the nation’s history; England have won 15 of their last 17 matches at Wembley; follow in our dedicated live blog across Sky Sports’ digital platforms Fifty-five years. It’s easy to pass over or not appreciate the enormity of that timescale. But it’s not just a stat or a number to be thrown around.

It’s longer than the lifetime of many of the supporters who were inside Wembley or watching on from afar on Wednesday night. It makes up the majority of the lifetime of plenty more who witnessed Gareth Southgate’s side carve out a moment of English football history.

It’s a timeline which stretches back over early childhood memories. Vague recollections of white shirts on TV screens during distant summers, when something important was taking place but, whatever it was, disappointment was the final feeling.

As the years moved on, the context became clearer – but that deflation repeatedly returned. The excitement, the belief was always crushed by the blows of defeat. The realisation it wasn’t going to be this time. The lump in the throat. The tears.

How harsh those losses felt when you were young. So in love with the game, so certain of your heroes – and so unprepared for what awaited them.

For different fans the let-downs will be more keenly felt in different eras but from Mexico to Italy, Belgium to Ukraine, Japan to Brazil, England and their supporters have travelled the world in search of success and only found heartache.

Whether you’ve been in for the whole stretch or just done relatively little time, we’ve all been trapped in the prison of pain that has been supporting England. The inescapable disappointment. ‘All those oh-so-nears/wear you down/through the years’.

But after all those years of hurt, Gareth Southgate’s young side have begun to unpick the lock.

Undimmed and undeterred by the failings of their predecessors, they’ve cast off the shackles of the past. A penalty shoot-out win over Colombia. A first knockout match victory over Germany since 1966. And now a first major tournament final since the other one.

Wembley roared with freedom when Harry Kane followed up his penalty to smash England past Denmark and into Sunday’s showdown with Italy.

It was a celebration incomparable to anything previously seen in the new incarnation of the national stadium. After a year and a half of lockdowns, restrictions and enforced distance from football, there were scenes to treasure. Fans running down aisles. Fans climbing on other fans’ shoulders. Fans with their hands on their heads, unable to take it all in.

It was an outpouring of pent-up passion and joy. The goal snapped the tension of the tie but the emotions around the ground were super-charged by what had gone before.

Good times never seemed so good, as one of England’s adopted anthems for this tournament goes. But it is the suffering that makes it taste all the sweeter.

There is one more step to take. But this is an England side to believe in again.

The defence has been beaten just once – by a brilliant free-kick. The only direct free-kick that’s been scored at these Euros. Goalkeeper Jordan Pickford is already assured of the golden glove award.

He’s faced fewer shots on target than any team in the tournament, just 2.2 per match. That’s testament to Kyle Walker, Harry Maguire, and John Stones in front of him – three players better for the experience of their own England heartbreak in the semi-finals of the World Cup – and a reborn Luke Shaw. Shawberto Carlos, as his team-mates call him!

Kalvin Phillips and Declan Rice have provided protection and control in midfield, playing with a composure beyond their years, while Raheem Sterling has been this team’s go-to man. The boy from Brent has embraced the role, running at opposition defenders whenever the ball is at his feet.

The captain, Kane, is transformed from the early games of the tournament, when he was on the fringes of the action. He has delivered in key moments and looked better with each match. In Russia he faded as the World Cup progressed, here he looks increasingly inspired by what his team are doing. He’s one strike away from another golden boot.

Alongside him, Bukayo Saka is one of the stories of the summer, elevated from squad player to star performer, while Jadon Sancho’s cameo against Ukraine, and the bursts of fan favourite Jack Grealish, have demonstrated the strength in depth Southgate can call upon.

It’s a team which promotes important messages off the field, and it’s a team which has adapted and thrived when faced with different challenges on it. They’ve broken records and made history, surpassing all who came before them since the heroes of 66.

We never stopped dreaming. But this is real. And on Sunday, glory beckons… 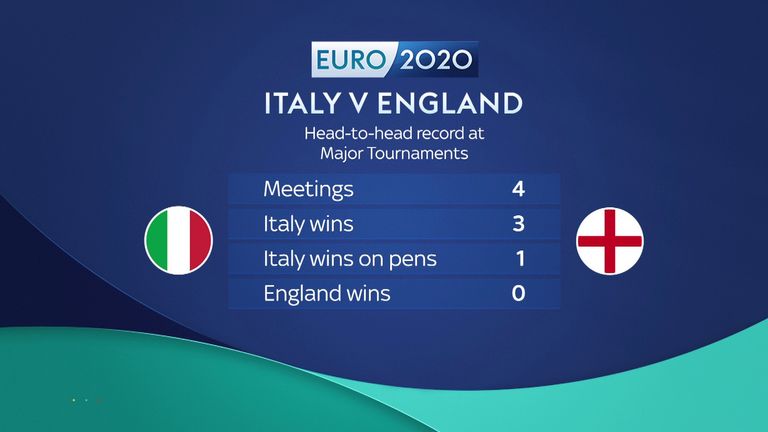 England came through 90 minutes and extra-time against Denmark in the semi-finals with a clean bill of health, meaning all 26 members of Gareth Southgate’s squad are available for Sunday’s final.

Instead of fitness or injury headaches, Southgate’s focus will be on finetuning formation and tactics, with a number of key selections still under consideration.

Saka, England’s only alteration before the Denmark game, has staked a decent claim to start the final alongside Harry Kane and Raheem Sterling, though will face competition from Jadon Sancho, Jack Grealish and Phil Foden.

Like England, Italy survived extra-time and penalties against Spain in the semi-finals without sustaining injuries.

However, the Azzurri remain without star performer Leonardo Spinazzola after his impressive Euro 2020 campaign was abruptly cut short by an Achilles rupture in the quarter-final victory over Belgium, meaning Chelsea’s Emerson Palmieri will continue to deputise at left-back.

Between them, England (2.2) and Italy (2.3) have faced fewer shots on target per game than any other sides at EURO 2020. England also have the lowest expected goals against tally in the competition so far (3.2).

England are unbeaten in their last 12 matches in all competitions (W11 D1), keeping 10 clean sheets and conceding just two goals in the process.

The Three Lions have conceded just one goal so far at EURO 2020, with four of the seven previous sides to concede just once in a European Championship tournament winning the trophy (Soviet Union 1960, Italy 1968, Germany 1972 and Spain 2012).

Southgate: Italy an exceptional side

If they are to win the European Championship for the first time, England will have to beat a side which has not tasted defeat since September 2018.

Italy have had 12 shots and scored three goals as a result of a high turnover (open play sequences beginning 40m or less from opponent’s goal line) at EURO 2020, more than any other side.

The Azzurri beat Spain on penalties in their semi-final and Southgate is expecting a tough test from the 1968 European champions, especially given England have 24 hours less to prepare.

“It is definitely a bit of a disadvantage but we have to find the best way of dealing with that,” he said.

“In terms of Italy, I think what Roberto [Mancini] has done and the way they’ve played the last couple of years… the record speaks for itself in terms of the wins, the small number of goals conceded.

“The style of play has been exceptional.”

Only Pierre-Emile Højbjerg (15) has started more open play sequences ending in a shot than Italy’s Marco Verratti (9) so far at EURO 2020. On top of that, only Kevin De Bruyne (13) has created more chances at EURO 2020 than Verratti (12).

“There are some elements in their team you can target,” he told Sky Sports. “I think Jorginho is a fantastic player technically, but can you hurry him up?

“Can you put him under pressure? When that ball gets played into him at times, of course he’s brilliant. He gets it on the half turn, play passes and sometimes he can make you look a little bit of a fool.

“But you’ve still got to gamble and try and press him, winning the ball high up the pitch. If you can do that, then straight away you are at their back four and with their high full-backs, you can get the ball down the sides to get at them.”

Merson: Gareth has done it his way

England’s 2-1 win over Denmark in the semi-final was their eighth win in a major tournament match (World Cup/Euros) under Southgate, moving him level with Alf Ramsey for joint-most victories by an England manager across the two competitions.

Sky Sports’ Paul Merson said: “You’ve got to hand it to Gareth Southgate. What a brave manager he is.

“Through the whole of this tournament he’s made big decisions, big enough decisions that if they were to go wrong, he’d probably be out of a job the next day. 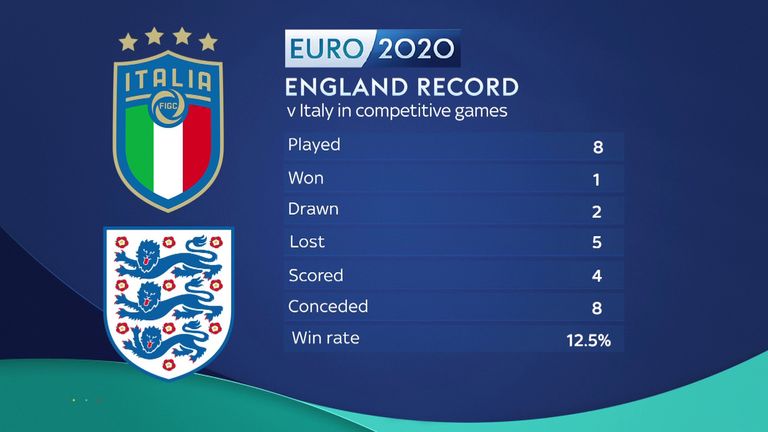 “Taking Jack Grealish off was another big one. Taking someone off like Jack, who when the game really opens up is the one player who can really punish the opposition other than Sterling.

“But that is what I like about Gareth. From day one he’s made the tough calls. From Kieran Trippier playing left-back against Croatia, every decision he’s had has been a big one and he’s done it his way.”

Can Kane collect another Golden Boot?

Kane is still in with a chance of winning the Golden Boot, having scored four goals in the tournament so far – one behind Cristiano Ronaldo and Patrik Schick.

Kane has been directly involved in 28 goals in his last 27 appearances for England in all competitions (19 goals, 9 assists).

“He’s playing superbly again and is playing back to something like his best.

“His general play, his movement and the way he shifts his body when a defender is trying to get the ball and his first touch is second to none.

“It’s a massive boost for England to have their captain flying again.”

Carra: Sterling for player of the Euros?

Former England defender Jamie Carragher thinks Sterling is the leading candidate to be player of Euro 2020.

Seven of these have been in the opposition penalty area (the joint-most), one of which led to England’s penalty against Denmark in the semi-final which led to their winning goal.

“I said this after the group games, I think Raheem Sterling has been England’s best player by a long way,” Carragher told Sky Sports News. 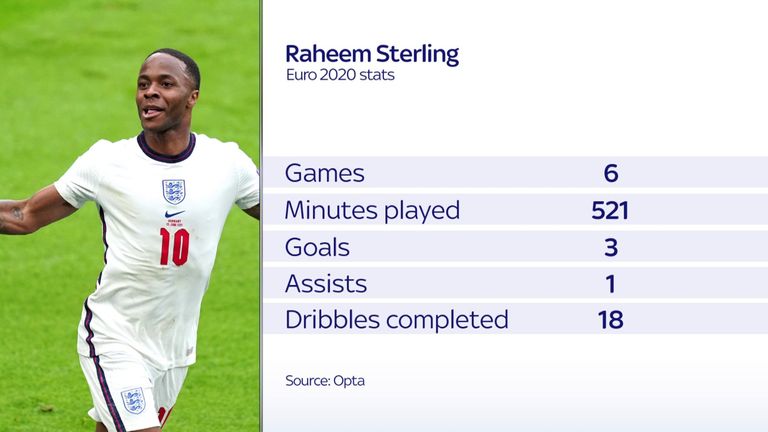 “There was a lot of talk going into the competition that his position in the team was up for grabs, which I couldn’t understand because he has been outstanding for [manager] Gareth Southgate since the World Cup, over a two or three-year period.

“And especially the way Harry Kane is playing, coming deeper for the ball and trying to get on the ball, you have to have people making runs in behind and having pace in behind.

“I think before this tournament started, the two first names on the team sheet, if everyone was fit, would be Harry Kane and Harry Maguire – but now it has to be Raheem Sterling joining those two.”

Drink it in… England are in a major tournament final for the first time since 1966 after their extra-time win over Denmark at Wembley in semi-final of Euro 2020.

Kate Burlaga is joined by Rob Dorsett, Pete Smith and Nick Wright to discuss an historic night, and whether this ‘new England’ side can go all the way against Italy on Sunday.

Tags: England, Italy, set, vs, Wembley
You may also like
Latest Posts