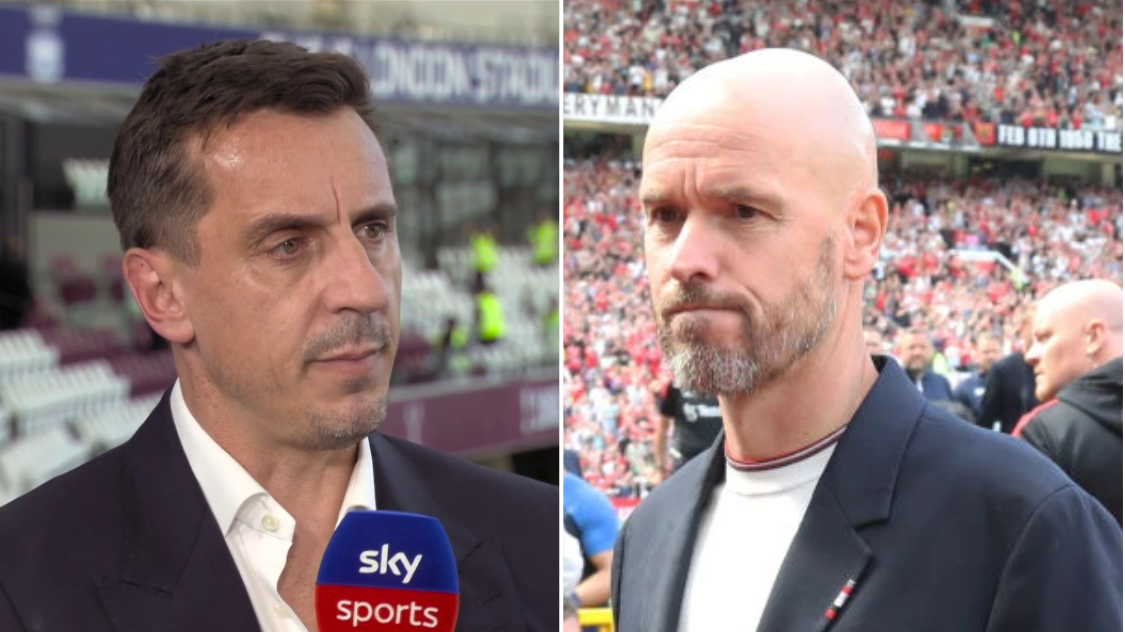 Manchester United legends Gary Neville and Roy Keane have questioned the club’s rumoured move for Marko Arnautovic and slammed their approach to recruitment this summer.

The Red Devils kicked off the new season, and Erik ten Hag’s reign, with a 2-1 defeat at home to Brighton on Sunday, with just two new signings – Lisandro Martinez and Christian Eriksen – in the starting XI.

Ten Hag was forced to field Eriksen as a false nine with Anthony Martial injured, and the club have now been linked with a surprise £7m move for 33-year-old Bologna striker Arnautovic to provide emergency cover and competition up top.

But Neville cannot find any enthusiasm for the deal and has likened the Austrian to other over-the-hill signings United have made, while he expects Bologna to make the club’s hierarchy pay over the odds for Arnautovic.

Asked about the surprise move for the former Stoke forward, Neville told Sky Sports: ‘The first thing you do when the phone rings from Manchester United is reject the bid.

‘The reality of it is you know full well, they’ve lost that game today, they’re actually negotiating from an even worse position than they were yesterday and that’s a bigger problem for them.’

After initially claiming he had nothing to say about the move for Arnautovic, Neville said: ‘We’ve seen it with Falcao, Ibrahimovic, Cavani, Ighalo – these desperate, sort of experienced signings.

Fellow pundit Keane was similarly dismayed by the link to Arnautovic, chiming in: ‘Who’s making these decisions? Who’s deciding which players are going to come in?

‘They’re talking about Darren Fletcher as technical director, they’ve got a new coach, John Murtough is obviously involved, there’s a new chief executive, there’s talk about them going back to Alex Ferguson and David Gill. My goodness, what is going on?

‘It’s alright having the money, you’ve got to get the right players in with the right character.’

On United’s failure to overhaul the squad this summer, which has left them short up top, Neville continued: ‘The money that was needed to rebuild that squad this summer… they knew six months ago, eight months, 12 months ago that there was going to need to be investment this summer.

‘All those players that were leaving like Mata and Matic and all the other ones that have left, they knew they had a problem with Martial not having been fancied in the past, Cristiano coming to the end, Cavani leaving, obviously the situation with Greenwood not in the club anymore. All these things have been known for a long time, it’s not as if it’s just hit them now.’