Green shoots of progress spring from the branches of Jacqui Oatley’s family tree.

‘I got into football as a young teen,’ begins the broadcaster, now in her forties. ‘I looked around and couldn’t find any clubs anywhere near me.’

When her daughter Phoebe decided to follow suit, the search party only needed to reach the end of their road. 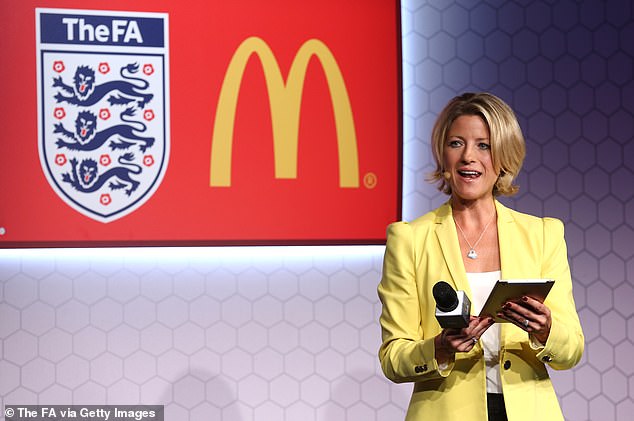 Jacqui Oatley is a founding member of Women in Football, who have recently launched the #GetOnside campaign

‘That’s the big difference now,’ says Oatley. ‘With young girls, the key thing is accessibility to good coaching and to clubs. That’s changed a radical amount.’

But work remains to be done. That’s why Women In Football, of which Oatley is a founding member, recently launched #GetOnside.

The aim? ‘Getting organisations and individuals to think, ‘What can I do, in a practical sense, to improve the landscape for women working in football? And, as a result, make football better’.’

Aston Villa, Brighton and Everton are among those vowing to smooth the pathways. The FA, meanwhile, have pledged to invest in 1,000 clubs to swell the girls’ grassroots game.

‘That’s going to make a real difference in a few years’ time,’ says Oatley. ‘You’re going to not only be getting young girls fitter and stronger, you’re also going to change attitudes among their brothers.

‘Certainly in my generation… when it came to playing in teams, they’d usually be the only girl. Then they had all the attitudes that went with it — ‘You can’t play, you’re a girl’. That’s just so different now.

‘Boys growing up then are now the men in organisations who maybe don’t see women as being up to (it)… those old-fashioned attitudes come, I think, from a generation where girls grew up and if they liked football they were laughed at. That’s not the case now.’

Her children suggest as much. ‘My son (Max) is seven. It wouldn’t occur to him that his sister should be less entitled to play football,’ says Oatley.

Just as youngsters now are becoming used to seeing the Women’s Super League on prime-time television — barely a decade after its formation. ‘Imagine where we’ll be in 10 years’ time when these girls have (had) the quality of coaching and the attitudes it changes as well, from the little boys growing up,’ says Oatley.

‘Boys won’t have that attitude that football is for them and not for the girls in the playground. I find that pretty exciting.’

The benefits of this ground swell should trickle up football’s food chain.

The advantage of #GetOnside is that rhetoric is giving way to action. That has been the mantra of Women In Football since 2007 and their first meeting in a Soho pub. ‘We were all the only woman in the press room or the board room or the physio room,’ she recalls.

That same year, Oatley became the first woman commentator on Match of the Day. What should have been a pioneering step was instead rendered a ‘really unpleasant’ experience.

‘It was the whole novelty factor I despised with a passion,’ says Oatley. ‘It was all completely and utterly insane.’

Times have changed but prejudice persists. Oatley’s own pledge is to mentor female sports broadcasters. 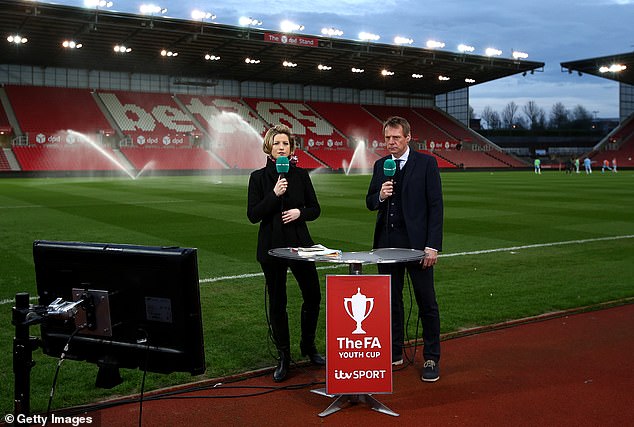 Oatley, who was Match of the Day’s first woman commentator, is looking to mentor female sports broadcasters

‘If I could have picked up the phone to somebody who understood, who knew, who’d trodden that path before… that would have been fantastic,’ she says. ‘That’s absolutely what I try to do for other people.’

Sian Massey-Ellis, English football’s trailblazing assistant referee, will invite three aspiring female officials to join her on a training day. Other barriers still need breaking down. ‘If every single football club in the country could pledge to smooth the pathway to have senior women in management at the top, I think that (would be) huge,’ says Oatley.

‘Having more women making the decisions at the top of football clubs will be massively beneficial to the fanbase and to the people who work at that club.

‘That’s something I feel quite strongly about. Diversity at the top of clubs is clearly something not widespread enough.’

She cites the lack of black managers and hopes a female coach will eventually cross the divide, even if ‘no woman wants to be a novelty’.

‘It’s not just about being nice to women here, it’s way more significant — it’s about opening up those governing bodies to ensure they’re recruiting the best talent on offer,’ explains Oatley.

‘(Research) has proven that diversity at the top of an organisation can make (them) more money.

‘When you start talking to chief executives and owners of clubs about them making more money, perhaps that’s when they sit up and take note.’

There is more at stake than £ signs, though.

‘Girls growing up now — at school, at university — can look at this campaign, can look at football and say, ‘I don’t see those barriers anymore. I’m seeing those people inviting me in if I have the desire, the work ethic, the skillset’… that’s what we’re aiming for.’