James Rodriguez has been cut from the Colombia squad due to injury and the Everton playmaker will miss the Copa America and two World Cup qualifiers against Peru and Argentina in June.

In the past few days, the midfielder underwent medical exams which determined that he is not match-fit and he will not join up with Reinaldo Ruedas’s Colombia squad for their games this summer.

The Colombian Football Federation did not specify what the problem was, but the Everton player has missed several games this season with a calf injury and was not named in Carlo Ancelotti’s squad for five of the Toffees’ last six matches in the Premier League this season.

A statement read: “The coaching staff of the Colombian Senior Men’s National Team informs that the player James Rodriguez has been recalled for the games against Peru and Argentina for the qualifiers for the FIFA World Cup Qatar 2022, and the CONMEBOL Copa America 2021. 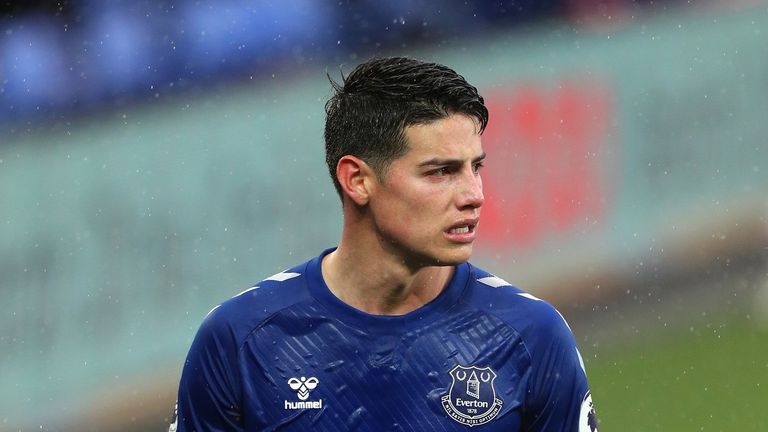 “In recent days, the midfielder underwent medical examinations, which determined that he is not at the optimal level of competition, so he will not be able to join the group of players called up by Reinaldo Rueda for the aforementioned matches and the South American championship.

“The coach and his team of collaborators regret not being able to count on James Rodríguez this time and hope that soon the midfielder will be able to be part of a call-up, representing our country with the height and professionalism as he has always done.”

Rodriguez, who was restricted to 26 appearances in all competitions this season for the Toffees, missed Everton’s penultimate Premier League game of the season against Wolves due to a fatigue issue.

Everton boss Ancelotti said ahead of their final match of the season against champions Manchester City that Rodriguez was disappointed not to have been able to help his team during their run-in.

The 29-year-old holds 76 caps for his national team and last featured for them in 2022 World Cup qualifiers against Uruguay and Ecuador in November last year.

Colombia face Qatar 2022 qualifiers away in Peru on June 3 and at home to Argentina five days later while the Copa America starts on June 13.

Colombia were meant to co-host the tournament with Argentina but civil unrest there prompted the South American Football Confederation to remove their status as a host nation for the competition. No decision has been taken yet on where to play the 15 games that were scheduled to be played in Colombia.

Argentina president Alberto Fernandez has already suggested his country could host the entire tournament, while Colombia’s Sports Minister Ernesto Lucena has requested that CONMEBOL move the competition to the end of the year.