Burnley winger Johann Berg Gudmundsson has suffered another injury setback but the Clarets could have Ashley Barnes back in first-team contention.

Gudmundsson was left on the bench on Sunday as Burnley took a giant leap towards Premier League survival with an impressive 4-0 win at Wolves – the club’s biggest victory in the top flight since 1965.

Dyche said the Iceland international had not been risked after sustaining a minor abdominal injury in the defeat to Manchester United.

“Johann keeps getting these niggles and had another one after the Manchester United game with a minor tear in his oblique so he was not quite fit,” said the Burnley boss.

“We keep putting these players at risk, we are not trying to of course, but we have had to. We have players coming back fit as well so I thought we didn’t need to stretch it.” 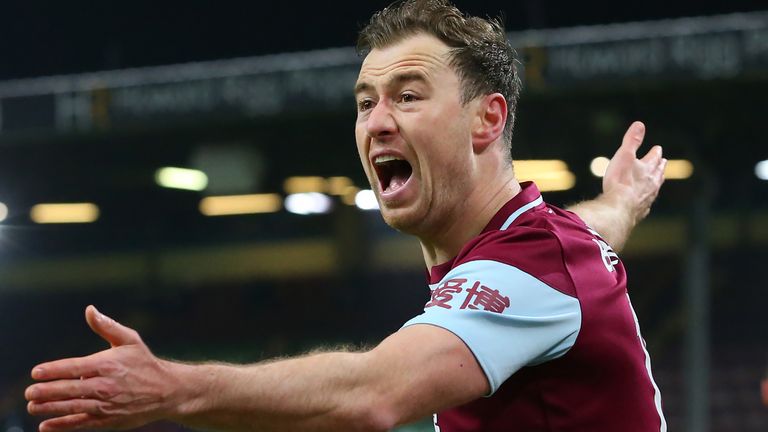 Barnes made a surprising return to the matchday squad at Molineux after recovering from his thigh problem but the striker was an unused substitute and was not given a run out despite Burnley having the game won with time to spare.

Dyche believes the 31-year-old needs another week of training before he can be considered for a first-team return – meaning he could be involved when West Ham visit Turf Moor on May 3, live on Sky Sports.

Barnes has not featured since scoring in the 1-1 home draw with Fulham on February 17.

“Barnesy was involved today but probably needs another week’s training if truth be known,” said Dyche.

“I am delighted for him [to be fit again]. It’s been a long run, a few of the players have had a real challenge on their hands and still have, it’s been a real tough season in that regard.

“But there is plenty of activity from the players and we do look stronger on the bench. Even in the summer I said it, when everyone is fit I believe we are a competitive group and we’re showing that again.”