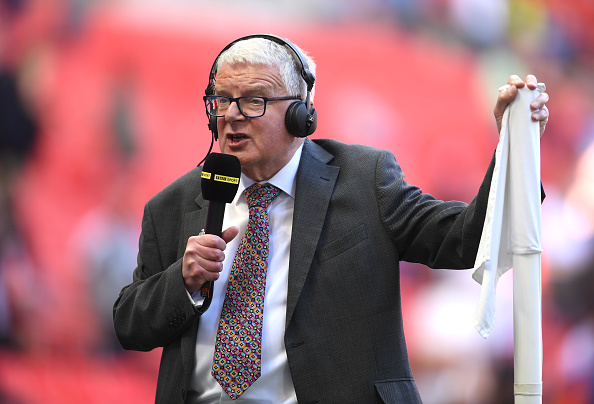 Legendary former BBC commentator John Motson has called some of the most historic moments in FA Cup final history. Here he tells Metro.co.uk about some of his favourite memories from the world’s oldest cup competition…

What is your first FA Cup memory?

It was in 1950 when my dad took me to watch Arsenal play Liverpool on the smallest television you can possibly imagine at a shop called Drysdales in Woolwich town centre. It was on this little nine-inch television screen that I saw Reg Lewis score twice as Arsenal beat Liverpool 2-0.

It changed my career and my life. Ronnie Radford’s 40-yard belter came out of nothing after Malcolm MacDonald had put Newcastle ahead, Ricky George’s winner in extra-time and suddenly Hereford were headline news and my match went from the bottom of the Match of the Day running order to the top. It was then that people started to believe I could commentate on more important games.

When was your first final commentary?

1977 — Manchester United 2 Liverpool 1 with a scrappy winning goal when Lou Macari’s shot went in off Jimmy Greenhoff’s chest. Jimmy Hill pointed that out to me, thank goodness, and saved me on the day. It wasn’t a great commentary but at the end I did have one line that seemed to go down quite well when I said it was quite appropriate that a man called Buchan should go up the 39 steps to lift the FA Cup. Martin Buchan being the Manchester United captain and of course John Buchan’s ‘39 Steps’ was an iconic novel.

I hadn’t prepared that line but Liverpool were the culture club, with Peter Beardsley, John Barnes and all of the players on that day trying to complete a Double. Manchester United had upset Liverpool in 1977 in my first final but, goodness me, Wimbledon certainly upset them in 1988. The winning goal headed by Lawrie Sanchez and a penalty save by Dave Beasant. That was a wonderful moment for me as a commentator because a penalty had never been missed or saved in an FA Cup final. I’d spoken to Beasant on the Tuesday night on the phone and asked, ‘What will happen if you get to face a penalty from John Aldridge’, who was making waves at the time with his paused run-up. Beasant said, ‘It doesn’t matter what Aldridge does in his run-up I’m going to dive to my left’. Lo-and-behold they got the penalty and up stepped Aldridge, Beasant went to his left and made the save that effectively won the FA Cup for Wimbledon. What a story that was.

Have you got a favourite FA Cup final?

I think the 1981 final replay, the first of its kind, the 100th FA Cup final when Spurs beat Manchester City 3-2 with that wonderful winning goal from Ricky Villa, when he ran through the whole of the City defence and slotted the ball past Joe Corrigan. It was the first Thursday night replay at Wembley and it was a privilege to be commentating that night.

Finally, how do you view the final between Chelsea and Liverpool?

I’ll be at Wembley on Saturday and I think it’s wide open. If Liverpool play to their high potential they will probably win. If Chelsea can catch them on an off-day and raise their game it could be their day. I see it being a close contest. All the history of the past few weeks, or the past few years for that matter, is almost relegated to irrelevance when they get on the pitch on Saturday and I think it could be a classic.