‘The manager has been brilliant for this club’: Jonjo Shelvey heaps praise on Newcastle boss Eddie Howe, as the midfielder talks of Europa League ambitions after a summer in the gym

Jonjo Shelvey is joking about his baldy head putting 10 years on him. Well, the ripped physique he has unveiled here in Austria this week takes that decade back off.

For one month solid this summer, in the seaside town of Belek in southern Turkey, he worked alone with a personal trainer. All the while, his wife and children were by the swimming pool.

Shelvey sacrificed several social engagements back in the UK to remain at his Mediterranean boot camp. Anyone present at Newcastle’s friendly matches this week was instantly moved to comment on his new, slimline look. It was as noticeable as the mountains forming the backdrop to the countryside stadiums of Saalfelden and Kufstein.

The 30-year-old has lost 35mm of body fat. In fact, the club’s nutritionist is encouraging him to eat more to sustain energy levels. 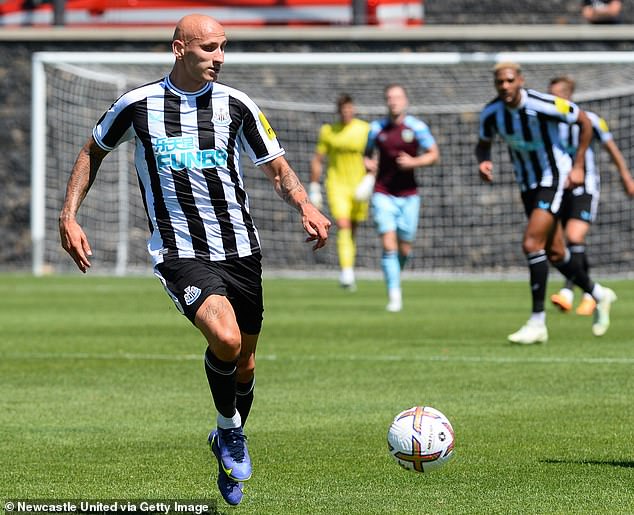 Why, you might wonder, has Shelvey not done this extra work in recent years? The first explanation is that he was invariably injured. At Newcastle, he was not alone on that front.

But more so, you learn, it is the influence of Eddie Howe and the standards demanded by the head coach that has led Shelvey to reconsider how he spends the close season. The midfielder’s feet have seldom failed him; his mind and body have not been so reliable. Howe wants to change that.

‘The gaffer might text you at half ten one night with a clip from training,’ reveals Shelvey, speaking amid the Tirol Mountains. ‘He’s constantly on at you, reviewing your game. It’s football, football, football.

‘In past years, you go home and leave the football at the training ground.. You just switched off. I wouldn’t go home and think about what we did at training. I would leave my work at work and concentrate on the kids.

‘Now, I’m going home thinking about what I could have done better at training. That is something the gaffer has instilled in us. As soon as Eddie came in, the intensity of the sessions went through the roof. Every drill is set up, they all lead into each other. 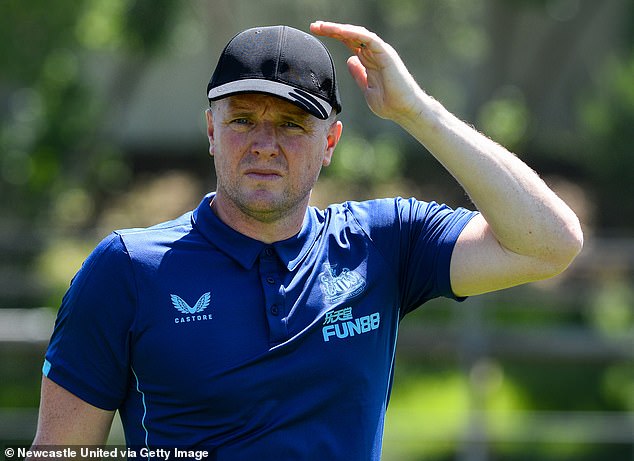 ‘It isn’t until the manager coming in here that you feel proper fit. It’s been a breath of fresh air. It’s just a great place to be. The manager has been brilliant for this club.’

That much was evident watching training in Saalfelden this week, where former Spurs and Germany star Christian Ziege’s house overlooked the pitches. He even appeared briefly on his balcony at one stage. Indeed, it was tiring just to observe one of Howe’s team-based possession drills, where the stakes seemed higher than either of their two friendly games.

It was not just the collection of coaches on the perimeter that afforded no hiding the place – the players knew that a drone hovering above was capturing every action for Howe to re-watch later in the day.

Shelvey was among those who impressed – you would expect so in a technical session – but it was as much his energy in closing down and tackling that caught the eye. So, what did his summer involve?

‘I’ve not really had a summer! I was injured at the back end of the season. I went away and did my rehab in Turkey and took my trainer with me. I took the missus and kids as well and we stayed there for a month. We didn’t bother to come back. 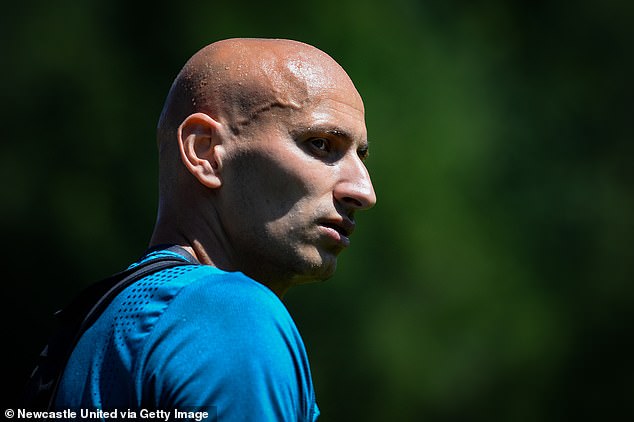 ‘I just basically smashed the gym. I didn’t do too much running, just into the gym building up my legs and body. It got a bit boring towards the end!’

A legacy of Mike Ashley’s Newcastle is that Shelvey needs to play only three more matches to earn a contract extension. There will no doubt be some around the Saudi-owned club who would prefer to have more control over such matters, especially as the new deal will take the former England international beyond his 32nd birthday.

But, for Shelvey, his situation presents a challenge, one whereby he must prove himself worthy of a place at a club whose ambition is to challenge at the top of the Premier League. That, in truth, is where he always imagined he would be competing when debuting for England, aged just 20, a decade ago. In his seven seasons at St James’ Park, though, the team has never been higher than 10th.

Now, under the meticulous management of Howe and with Saudi backing having seen £150million spent on seven new players since January, there is every chance that ceiling will be broken this campaign. Shelvey knows as much, and that is why he is fighting to be part of it.

Does, though, the arrival of the likes of Bruno Guimaraes – a £35million playmaker who starts for Brazil – hasten the need for extra effort? Shelvey seems unimpressed by the suggestion.

‘I wouldn’t say it was because of players coming in, I back myself against any player. I know my ability – everyone knows what I can do with a football. It’s just me keeping fit and showing the gaffer every day in training.

‘Don’t get me wrong, Bruno is a fantastic footballer, but there are going to be even more fantastic footballers joining the club – you have to raise your game constantly every day and strive to be better. Since I’ve been here, it’s the strongest the squad has been, and I just want to be part of it. I back myself to do that.

‘With the way the game is going, you’ve got to get on board or you fall by the wayside. A lot of the game is now based on stats, which may be right or wrong, but that’s the way it is. If I didn’t buy into it, I’d be out the door.’

Shelvey was sent off in the first game under Saudi ownership in October. A second-half substitute, he had only been on the pitch for 23 minutes. Many thought it signalled the beginning of the end for a player whose form and fitness have too often let down his obvious ability. 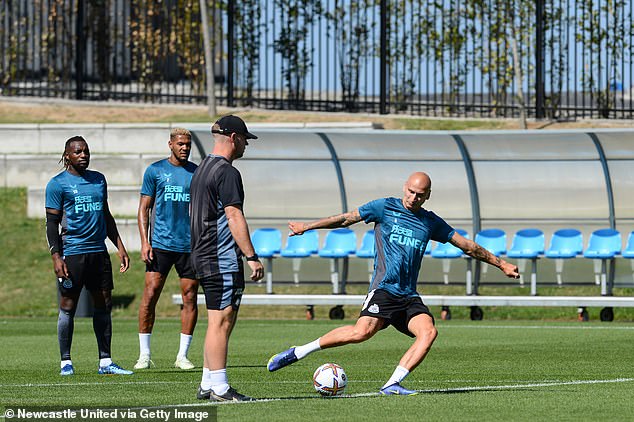 He returned, however, to anchor the midfield of a team who climbed from 19th to 11th, finding themselves fourth in the Premier League form table from January onwards. Top four, that sounds good for this season?

‘Let’s not go there…’ says Shelvey. ‘I think we need to have a season like West Ham did last year, fighting for Europe. Qualify for the Europa League, I feel that is the next step for this club.

‘We haven’t really set a target, but we know we have to use the team spirit from last season. You can see the spirit around the camp. There were so many singers around the hotel after dinner the other night, people were actually volunteering! It’s just a great place to be at the moment. No, before you ask, I’m not a singer!

‘But the club are putting in the foundations to go right to the very top. It’s an honour to still be here and to be part of the journey.’