England midfielder Jordan Henderson was withdrawn at half-time against Belgium due to tightness in his leg, says manager Gareth Southgate, casting doubt on his availability for injury-hit Liverpool this weekend.

Harry Winks replaced Henderson in the second half of England’s 2-0 loss in their Nations League group stage match on Sunday which ended the visitors’ hopes of reaching the finals.

“Jordan had a bit of tightness at half-time and felt he couldn’t carry on,” said Southgate, adding he was not sure if it was a hamstring issue.

Southgate said the Liverpool skipper will be assessed when they return to England.

Liverpool have had a number of regulars in their starting line-up sidelined with injury, losing defenders Virgil van Dijk and Joe Gomez after both underwent surgeries while Trent Alexander-Arnold withdrew from the England squad with injury.

The defence is threadbare with left-back Andy Robertson also a doubt with a hamstring issue while Liverpool’s midfield is without Thiago Alcantara and Alex Oxlade-Chamberlain as both players recover from knee injuries.

Meanwhile, forward Mohamed Salah is set to miss Sunday’s match against Leicester City, which is live on Sky Sports, as he isolates after testing positive for COVID-19.

Southgate said Manchester City winger Raheem Sterling would miss their final group stage match against Iceland with a calf injury but would be available for the weekend. Liverpool’s centre-back crisis has been dealt another blow after Joe Gomez suffered a potentially serious injury on England duty, joining Virgil van Dijk and Fabinho on the treatment table.

To compound the growing injury list, influential right-back Trent Alexander-Arnold also withdrew from international duty with a calf strain sustained during the 1-1 draw at Manchester City.

But have Liverpool picked up the most injuries this season? Data compiled by Premier Injuries reveals Jurgen Klopp’s side have picked up 15 injuries lasting 10 days or more this season – only Manchester City have suffered more (16). 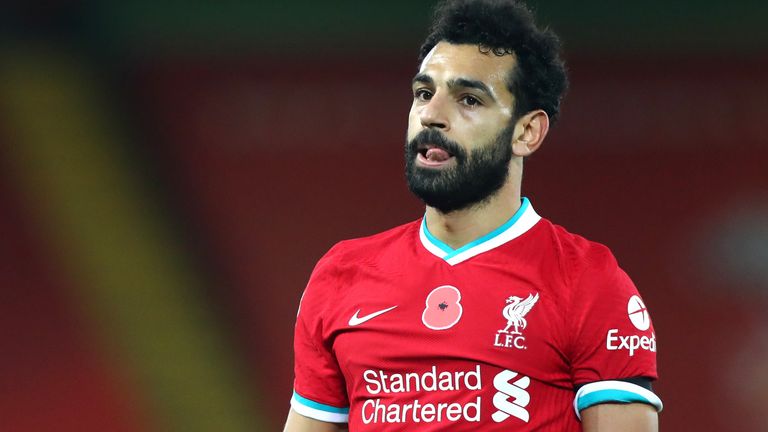 Mohamed Salah is in “high spirits and not showing symptoms” after having his coronavirus diagnosis confirmed by a second test, the Egyptian FA has confirmed.

The Liverpool forward is self-isolating and not expected to play in the two Africa Cup of Nations qualifiers against Togo on Saturday and Tuesday.

He is also a doubt for Liverpool’s clash with Leicester on November 22 due to UK government coronavirus rules dictating a 10-day isolation period after a positive test.