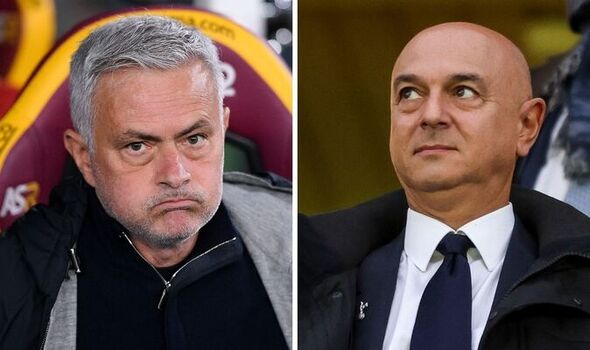 Jose Mourinho has maintained his box-office reputation with a fresh dig at Tottenham chief Daniel Levy over the circumstances surrounding his Spurs sacking. The Special One was handed his P45 by the north London club in April last year despite guiding his side to the Carabao Cup final.

Spurs’ 2-2 draw at Everton that saw them sit seventh in the Premier League proved to be the final straw, denying him of the opportunity to lead his side out at Wembley Stadium against Manchester City the following week.

The decision left a bad taste in the mouth of Mourinho and it appears he is still not over the brutal axe from Levy, who is now on his second manager of the season following the sacking of Nuno Espirito Santo in November.

Speaking ahead of the UEFA Conference League semi-final second leg against Leicester (1-1 ago), the Roma boss was keen to remind journalists of his unfortunate dismissal in his previous role.

It’s not the first time Mourinho has made a point of addressing the sacking in recent weeks, having also discussed Levy’s decision ahead of the first leg against Leicester at the King Power Stadium.

“I’m not afraid to win. I think Roma as a city, Roma as a club, my players, the people who work in the club, for the work we all did to improve, I think we deserve to be in the final,” Mourinho said last week.

“Unfortunately football doesn’t always give what you deserve and we have to beat a very good team. Am I afraid of winning the semi-final and being sacked – no.

“I have to admit in my long career, with so many things that happen, that one (the Tottenham sack) is quite unique. But I think also Mr Levy is quite a unique person in football.”

**We’ll be bringing you the very latest updates, pictures, and video on this breaking news story.