‘What are the odds he outscores Haaland and Nunez this season?’: Football fans hail Man City striker Julian Alvarez after he scores his first goal for the club in Community Shield clash with Liverpool

Manchester City fell to defeat in the Community Shield against Liverpool, but Pep Guardiola’s side had something to take from the game as new striker Julian Alvarez scored his first goal for the club.

Alvarez tucked home from close range to level the score against Liverpool, before Jurgen Klopp’s side went on to win the trophy thanks to goals from Mohamed Salah and Darwin Nunez.

All eyes had been on big-money signings Erling Haaland and Nunez before the game, but it was the £14million addition from River Plate who struck first out of the trio. 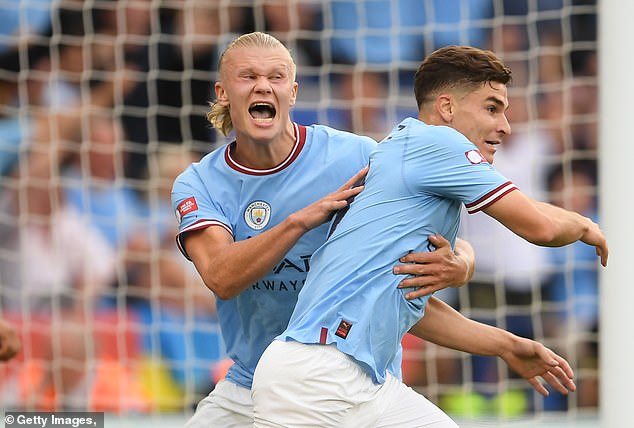 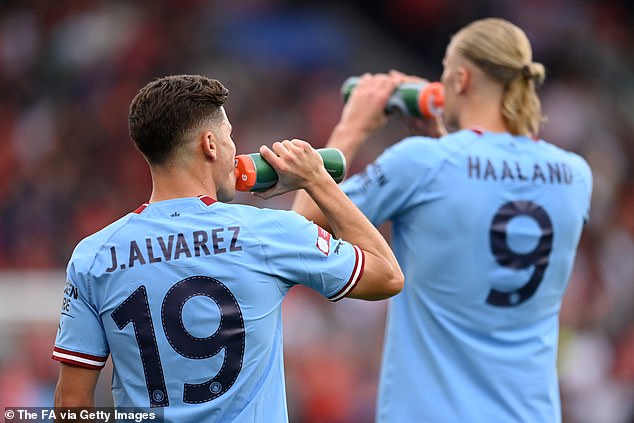 On social media, a Manchester United fan raised the question whether he would score more goals this season than £50m Man City signing Haaland, and £85m Liverpool addition Nunez.

KrisDio6 wrote: ‘What are the odds that Julian Alvarez outscores Haaland and Nunez this season? The joke is again on MUFC for ignoring Ralf Rangnick.’

A Manchester City fan wrote: ‘Forget that goal, it was common knowledge Alvarez is the perfect CF for this City team. 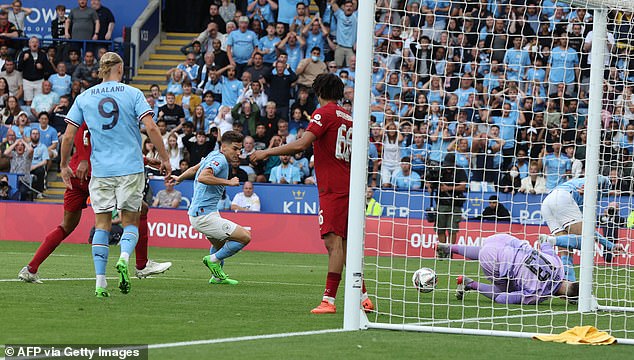 Alvarez had come on as 58th minute for Riyad Mahrez and didn’t have many touches before he did eventually score.

One fan wrote: ‘Two touches, one goal, Julian Alvarez ladies and gentleman’, while another added: ‘Julian Alvarez is the real deal this season’.

There had been a lengthy VAR delay before the 22-year-old’s goal was eventually given.

The offside flag had been raised immediately after he found the back of the net – judging Phil Foden to be off in the build-up – though replays showed the England international looked on.

One Twitter user wrote: ‘Good to see the delay in VAR is killing the game in yet another season. Right decision mind.’

Some fans didn’t get why it took so long for a decision to be made as one commented: ‘Back to the VAR delays’, and another wrote: ‘Obvious goal don’t know what the VAR delay was about’.

After the goal was given, Alvarez immediately went up to manager Pep Guardiola to take instructions.

One fan wrote: ‘Pep LMAOOOO… man knew it was a goal but took Alvarez for a random ass chat so the cameras could be on him. Tactical genius.’

Liverpool had taken the lead through Trent Alexander-Arnold in the first-half, before Alvarez equalised with 20 minutes to go.

Salah put the Reds back ahead from the penalty spot before Nunez ended his own impressive competitive debut with a goal. 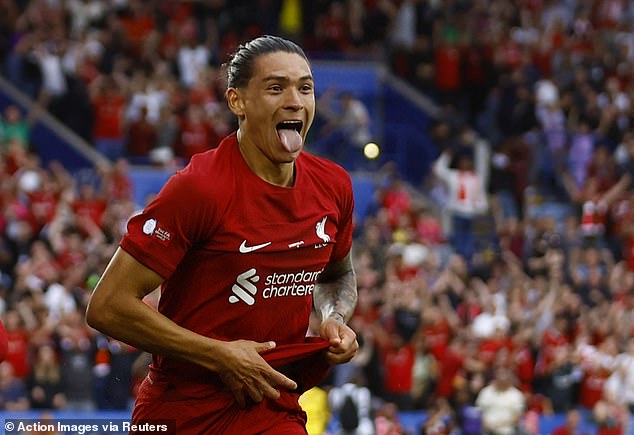