‘I’m so proud of my 21-minute England career’: Kevin Davies talks Bolton, booze, Big Sam and bagging bits and bobs in a bin-liner after his only cap!

Even a decade on, Kevin Davies can picture the line-up of usual suspects. ‘David Wheater… always up to stuff, Chris Eagles,’ he begins. ‘Mark Davies was another one who liked a wind-up. We had plenty in there and I wouldn’t put it past any of them.’

Except perhaps one. Among Bolton’s band of pranksters, El-Hadji Diouf had a fatal flaw. ‘I’m not sure he could put on the accent of an English secretary!’

Davies was 33 and experienced enough in football’s dark arts when he took a call, supposedly from the FA. 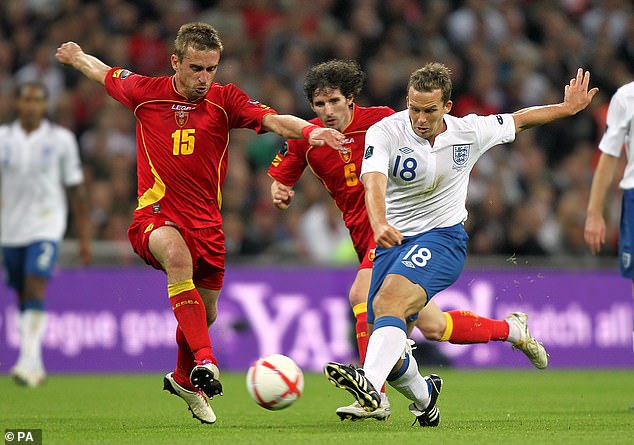 The caller said he had been selected in Fabio Capello’s England squad for the Euro 2012 qualifier against Montenegro, 10 years ago this month.

So the champagne remained on ice until the full squad list flicked across his TV screen.

Now, in Davies’s private gym, a frame hangs on the wall. Inside, the England shirt has slipped off-centre, the mud stain still visible across the chest. Somewhere, his cap hides among the debris of a recent house move. Davies has never watched his international highlights reel — a 21-minute cameo in an otherwise forgettable stalemate at Wembley.

But it was belated reward for a fine career, which began as a teenager at Chesterfield but will be remembered for the decade at Bolton when he typified Sam Allardyce’s brilliant, bulldozing team that took on Europe.

These days, following a brief stint coaching, Davies helps players negotiate the football pyramid. He knows the route to the top — and how pernickety people can be once you’re there. 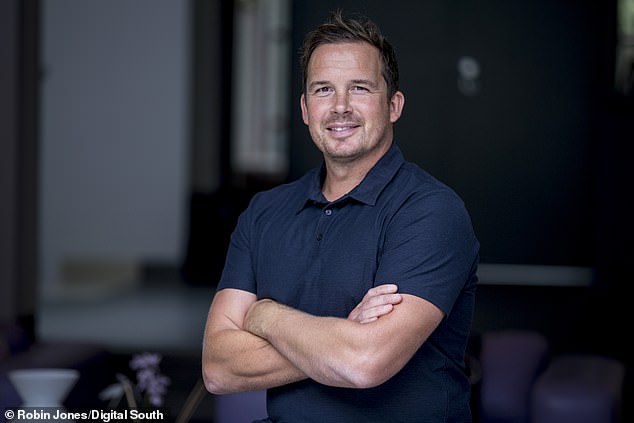 Davies recalls his first breakfast on England duty. ‘I grabbed some toast and asked for some butter. The chef said, “The Italians don’t do butter”.’ So Davies replied: ‘Can I put Nutella on?’

Chocolate spread was allowed in Camp Capello, it turns out.

‘There were all of these little rules… it was almost awkward,’ he recalls. ‘I’m not sure it was a camp that players would particularly look forward to.’ 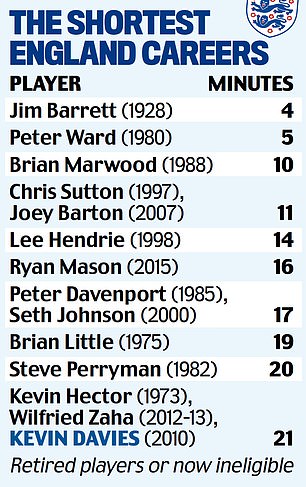 They couldn’t leave meals until the captain had gone and stretching sessions lasted 45 minutes. Even the dressing room ‘felt a bit flat’.

Still, Davies remained keen to soak everything up. ‘I remember just looking out of my window and seeing the England coach, speaking to the family and thinking, “This is amazing”.’

The striker’s displays in training earned him a spot on the bench and then, after 69 minutes at Wembley, Capello addressed Davies for the second time all week. ‘It was “Hello” and, I think, “You’re going on”. That was pretty much it,’ remembers Davies.

England’s oldest debutant for six decades at 33 years and 200 days, Davies tried to enliven the game but only hit the jackpot following the final whistle.

‘I remember the kitman coming over and saying, “Would you like me to get your shirts signed?”,’ he recalls. ‘Then it was about looking for any spare bits of kit and bagging it in my bin-liner! All these England bits and bobs — shorts, towels — I was like, “Get them in and pick them up for the kids”.’

When the next squad was being picked a few weeks later, Davies felt he’d earned a call.

‘We had this big charity do in Manchester and I wasn’t quite enjoying it,’ he says. ‘Then the call came. They said, “It’s only a friendly, we want to look at one or two other options”. I was a bit gutted and said, “Give me some more wine!”’

And so it was back to life at Bolton, where his career had been reignited under Allardyce.

As a youngster, Davies’s promise earned him a club-record £7.5million move to Blackburn. At 26, however, he was on the scrapheap. An outcast at Southampton, Davies was told on the way home from the 2003 FA Cup final that his contract would not be renewed. 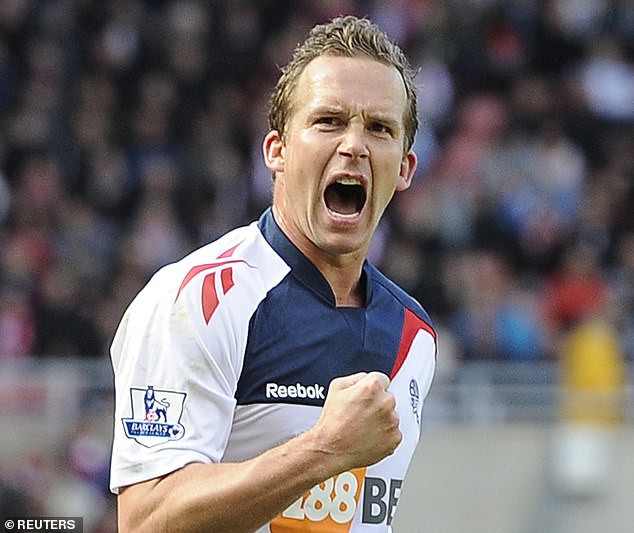 Off the pitch, meanwhile, his parents were suffering with terminal cancer, so Davies took them to Las Vegas. Then Bolton came calling.

‘I thought I’d better stop drinking and get back in shape,’ he laughs. In time, few players would better symbolise Allardyce’s eye for a diamond in the rough. First, though, a trial in the Italian mountains. ‘I was on the Atkins diet — no carbs for two weeks — and the boys were up at 6am in the Alps doing a fat-burning session.’

Bolton already boasted a core of English talent complemented by star quality such as Jay-Jay Okocha and Ivan Campo. But Allardyce’s human touch held everything together.

During his trial, Davies was summoned to the manager’s hotel room. ‘He was sitting there, dressing gown, bottle of red, cigar,’ smiles Davies. ‘We just had a frank conversation… he got you on board straight away.’

Instead, their rise was fuelled by Allardyce’s warm heart and cold eye for innovation.

‘You’d have reports every 10 weeks or 10 games,’ explains Davies. ‘You were expected to run so far during a game. He’d say to me, for instance, “After 10 games you’ve been involved in 82 per cent of the goals” — then they’d give you a target for the next 10.’

Bolton’s recruitment was brilliantly ambitious, too. France World Cup winner Youri Djorkaeff was the guinea pig who helped persuade other stars to follow. 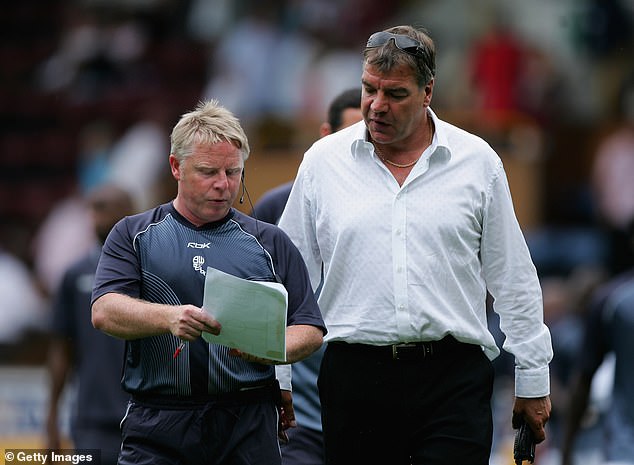 ‘Sam was very clever,’ says Davies. ‘No disrespect… but he didn’t bring Djorkaeff to Bolton town centre and have a bite to eat with him. He went over to Paris and did a presentation.’

Even players with a history for disruption — such as Diouf and Anelka — were largely tamed by the blend of science and savvy.

‘We had cryotherapy chambers fitted at the club, beetroot shots — which I think Leicester were talking about (following their title win in 2016) — we were doing that in 2003-04,’ continues Davies.

Bolton’s combative style won few admirers but Allardyce’s work behind the scenes did. Alongside the science and stats, there was fun. Allardyce would often allow players and staff to toast victory with a drink. ‘He’d randomly pull one or two people in to test them for alcohol. He said it was random but it was me or Kevin Nolan normally,’ says Davies. ‘He’d just have a laugh about it.

‘Some days, rather than going to training if the weather was bad, we’d just have a pool competition or a quiz.’

Results, though, were extraordinary. In the three full seasons Davies spent under Big Sam, Bolton’s worst Premier League finish was eighth. When he resigned in April 2007, they sat fifth. 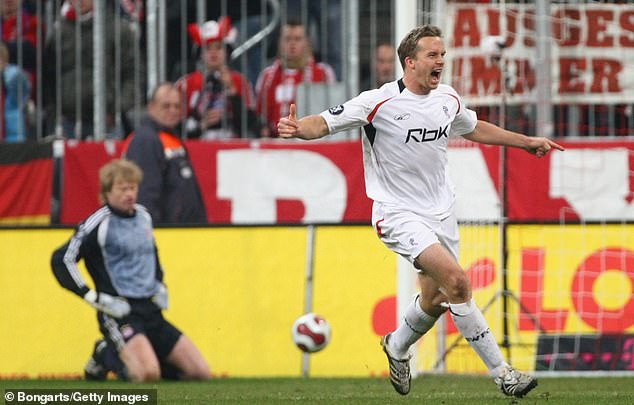 Arsene Wenger’s Arsenal seemed particularly vulnerable to the Reebok Stadium’s suffocating air. Between September 2004 and January 2007, Bolton won four of their eight meetings, losing only once.

‘In the rain and cold, you felt they didn’t quite fancy it.’

In the 13 years since Big Sam’s departure, Bolton have nosedived to League Two and near-extinction. But his legacy took some time to fade. In the 2007-08 UEFA Cup, under Gary Megson, Davies scored at the Allianz Arena as Bolton drew with Bayern Munich before beating Atletico Madrid over two legs.

The striker’s form held well into his thirties, when Capello’s head was turned.

When Davies eventually retired in 2015 after 820 games, 150 goals and 605 fouls (the second most in Premier League history), he had enough memorabilia to kit out a division. Much of it has been auctioned off, but a few precious items remain on show. Including that solitary white shirt.

Tags: Bolton, booze, Davies, Kevin, on
You may also like
Latest Posts