Harvey Barnes scored the first goal five minutes before half-time after he rounded Villa goalkeeper Pepe Reina, who came charging outside of his penalty area to give Barnes an easy score. 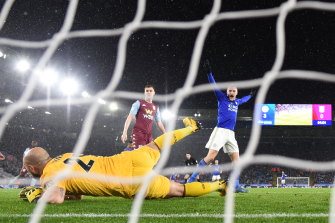 The video assistant referee (VAR) was called upon on 63 minutes, and awarded a controversial Leicester penalty after the ball appeared to hit Villa defender Tyrone Mings on the shoulder, but it was ruled as a handball offence.

Jamie Vardy stepped up to convert the penalty on his 300th Leicester appearance before adding a second goal on 79 minutes and Barnes doubled his tally with five minutes to play.

The 22-year-old Barnes could have had a hat-trick in injury time with a little more composure but snatched at his chance when the ball came across goal, slicing his shot wide.

It would have put the gloss on a great night for Leicester, but manager Brendan Rodgers will still be delighted with what he saw from his team.

Leicester sit comfortably in third place on 53 points after their latest win, while Villa are three points back from relegation safety with 25 points in 19th.