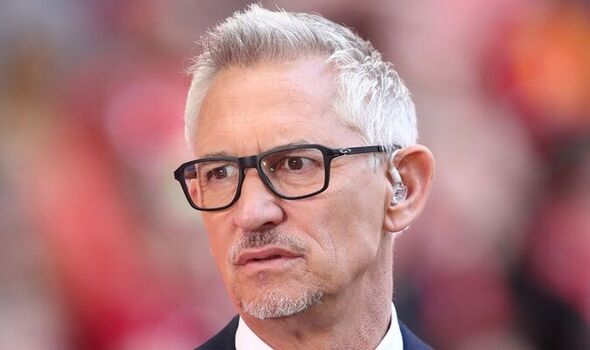 Gary Lineker is in agreement with Gary Neville that he is in Qatar to “report, not support” after the high-profile broadcaster defended his decision to work at the controversial World Cup in the Middle East. The host nation has been heavily criticised for its human rights record and treatment of migrant workers in the build up to the tournament as senior figures within the media seek to shine a light on the appalling truths behind the biggest show on earth.

Lineker has admitted there is a “queasy feeling” on his part surrounding the tournament but ultimately, he feels he has a job to do as the lead figure of BBC’s World Cup coverage.

“This is our job to come and report it and show people what it’s about at home and hopefully in a fair way,” he said.

Qatar has been accused of sports-washing as they bid to paper over the cracks and Lineker is not blind to that.

In fact, he believes Russia were also guilty of using the tournament in an attempt to shine a positive light on their country back in 2018.

He said: “I felt we were sports-washed in Russia. I don’t think the world stood up about what had happened in Crimea and I include ourselves in that.

“It didn’t seem like the world objected as much as they did about Russia invading Ukraine. You learn lessons. This is where the World Cup is. It’s here and we are here to report the World Cup and not support it. We will raise the issues and talk about them.

“Whether that makes any change here, I suspect it won’t, but I think it’s important to talk about the various issues going on, as well as the football.”

Former England international right-back Gary Neville, who is working for ITV as a pundit at the World Cup, has faced accusations of hypocrisy after agreeing to work at the tournament – despite highlighting some of the political issues presented by the host nation.

“There’s no-one that I think wants workers’ rights to be better than me, there’s no-one who wants women’s rights, equality or diversity more than me, I absolutely believe in it,” Neville recently told The Mail.

“When I highlight these issues, I can do so from a position whereby if I am covering eight games on beIN in a World Cup, and those issues come up or there’s an incident outside the stadium, I will highlight them, as I will on ITV, as I will on my own channels. I will never shy away from it.”

The Manchester United hero was recently given a dressing down by Ian Hislop when presenting Have I Got News For You.

“The others have been very gentle with you Gary, but the elephant in the room is still there,” Hislop said. “You’re commentating there aren’t you? And what’s the defence?”

To which Neville replied: “You’ve got a choice I think, haven’t you?” Before Hislop added: “What? Going or not going?”

Neville then attempted to justify his decision by claiming he was committed to speaking out on the human rights issues, the treatment of migrant workers and the criminalisation of homosexuality in Qatar.

“My view has always been that you either highlight the issues and challenges in these countries and speak about them, or you basically don’t say anything and you stay back home and don’t go,” Neville added. “And I always think we should challenge them.”

Hislop was not prepared to let him off the hook, however, responding: “There’s another option, you stay at home and highlight the abuses.

“You don’t have to go and take the Qatari’s money. I am not trying to be tartan but it’s not a very good defence.”

Neville has been publicly critical of the decision to award Qatar the World Cup while he also expressed his frustration at the £305million Saudi-backed takeover of Newcastle which was completed in 2021.

“Qatar have had Amnesty International and the International Labour Organisation all over them for the last ten years because of the World Cup. Saudi Arabia have come into our country to own Newcastle and they’ve got terrible human rights issues over there and people work for them in this country,” he told The Mail