Graffiti adorns the wall at the southern end of Copacabana beach on Avenida Atlantica by the old fort. It commemorates Germany’s win over Argentina in the 2014 World Cup final, schadenfreude for Brazilians, taking comfort in their neighbours falling short.

That evening in the Estadio do Maracana will always be part of the Lionel Messi story. He could never hope to eclipse what Diego Maradona had done in Mexico in 1986 but this was his opportunity to hold a mirror up to it by bringing the World Cup back from Brazil.

His big chance came at the start of the second half. Manuel Neuer was well beaten but the ball drifted past the far post. Nobody had as many shots in that final, nobody created more chances and nobody completed even half as many dribbles. Nobody cared. It felt like failure. Accepting the World Cup’s Golden Ball, a perverse joke. Twice, Messi has reached the final of the Copa America since then. Twice, Argentina have been beaten on penalties. Twice, Messi has been close to retiring, bereft, seemingly accepting of his fate.

On Saturday evening, three nights short of seven years since Messi’s date with destiny in the Maracana, he is set to return. A fourth Copa America final looms. Another shot at glory and redemption for the game’s most celebrated player, now 34 years young.

The Maracana will look and feel different. This Copa – moved to Brazil just weeks before it began – has been played out without crowds. It has taken some Messi magic to ignite it and there has been plenty of that on show. He has been the player of the tournament.

Ahead of Argentina’s final against Brazil, Messi already has four goals and five assists – topping both charts. In the quarter-final against Ecuador, he was decisive, cleverly setting up the first two goals before scoring the third in stoppage time.

That strike – “a work of art dressed as a goal,” wrote Maximiliano Uria in Clarin – was his second free-kick goal of the tournament, two more than have been scored in total at Euro 2020. Messi continues to amaze. He has been directly involved in eight of Argentina’s 10 goals in Brazil and played his part in the build-up to the other two. 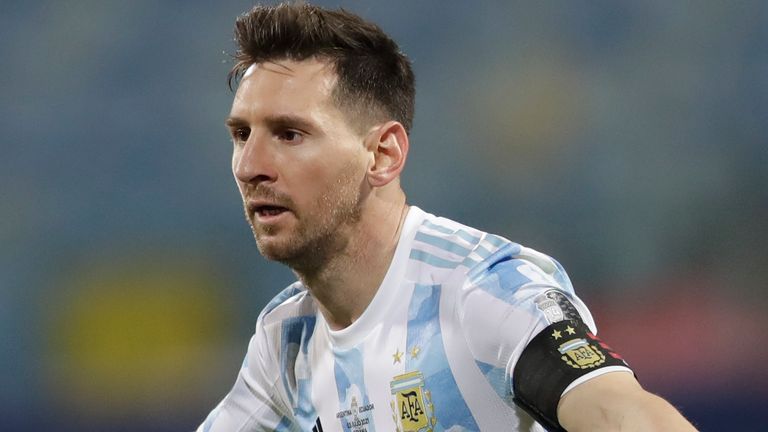 Officially, he has been named man of the match in four of Argentina’s five matches. Unofficially, such things matter less than they ever have – to him and to his legacy. “The individual awards are secondary,” says Messi. “We are here for something else.”

That specific comment came in response to the reminder that Messi is one goal away from Pele’s record of 77 international goals by a South American player. That record will tumble soon, just as another did against Bolivia as Messi became Argentina’s most capped player.

The doubts about his commitment to his country are long gone. He sat out Barcelona’s last game of the season, an indication of his priorities. Technically, he is now a free agent, without a club at all.

The group put together by Lionel Scaloni is functioning with the spirit of a club side. There have been more talented Argentina incarnations and doubts remain about the defence but there have not been many so together, so bonded by the bubble they are in. There is the hint of an idea too, a tempo to the attacking play. “I do not want to have the ball for the sake of it, but to attack,” says Scaloni. Against Ecuador, there was a conspicuous desire to win the ball back quickly that was instrumental in each of the first two goals.

That is no longer Messi’s natural game, although he did recover possession 10 times at the weekend. “He seems to walk in slow motion,” wrote Mariano Bereznicki in La Capital. “In reality, he is reading the play.” Others are able to complement his style now.

De Paul and Giovani Lo Celso have the close control and quality to exchange passes in midfield but there is energy and endeavour there too. Crucially, Nicolas Gonzalez and Lautaro Martinez have the pace and movement to latch onto his through balls in attack. There are signs of synergy on and off the pitch. “You can see it in the videos,” says 1986 World Cup winner Nery Pumpido. “They have barbecues, they are there with a smile. I think that is the main merit of Scaloni, he knows how to manage the group.”

All of which means that Messi, for whom carrying the national team has too often seemed like some of penance, finally appears to be having some fun in an Argentina shirt.

“Even the opponents enjoy it when they face him,” says Scaloni. After the game against Bolivia – two goals and an assist, by the way – beaten goalkeeper Carlos Lampe managed to snare Messi’s shirt, draping it from his television during the Ecuador game.

Brazil will not be so starstruck when the old rivals meet on Sunday. Though there will not be a hostile crowd awaiting Argentina, it will still feel like a disadvantage. Remember, second is nowhere.

“It’s not enough to just get to the final and not win,” said Messi of his previous Copa America final in 2016. That sense of urgency has only increased and this would be a particularly emotional triumph for player and country in the wake of Maradona’s passing in November.

Perhaps nowhere more so than in Rosario, Messi’s home town. There, another piece of art, very different from the one on Copacabana beach, now decorates a building overlooking the school that he attended as a child. It includes a larger than life image of Messi and reads, ‘From another galaxy, from my neighbourhood.’

The player from another planet is close to bringing the trophy home.

Tags: is, lighting, Lionel, Messi, th, up
You may also like
Latest Posts