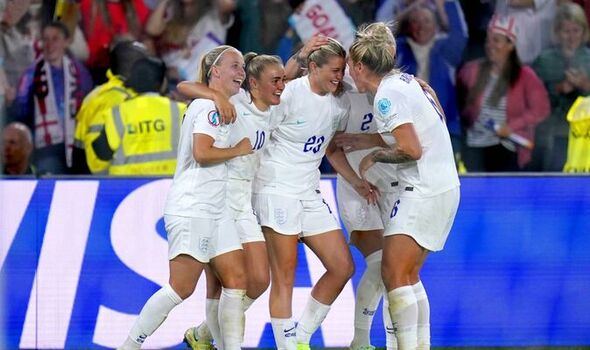 Sheffield’s Bramall Lane ended the night rocking – with the sellout 28,624 crowd singing Football’s Coming Home and Sweet Caroline. They had been treated to a stunning display by England as the players who bonded over Abba singalongs beat their semifinal bogey by mashing the Swedes.

They will now play Germany or France in front of a 90,000 capacity sell-out in Sunday’s final at Wembley.

Our Dancing Queens waltzed through their latest test with the growing support of the nation.

Prince William, president of the Football Association, tweeted: “Congratulations @Lionesses on making it to the #WEURO2022 final on Sunday. The entire country is so proud of everything you’re achieving. We believe in you and will be with you all the way!”

And Prime Minister Boris Johnson added: “On to Wembley! A fantastic result for Captain @leahcwilliamson and @Lionesses tonight against Sweden. Come on England, bring it home @ EURO2022” Scores of fans had packed into London’s Trafalgar Square to watch the match.

Jamey Leigh-Weber posted a picture and tweeted: “Now this is what I call football! Let’s go England! #footballiscominghome #euro2022.”

And Division Street in Sheffield city centre was crammed with supporters in the white and red England shirts and the blue and yellow of Sweden.

The national women’s team swept through the group stage, scoring 14 goals against Austria, Norway and Northern Ireland. And they had to hold their nerve to beat Spain 2-1 after extra time in the last eight.

Semi-final opponents Sweden were ranked higher at No 2 in the world. But after an early opportunity went begging, England sensed their chance.

Fans on Twitter saluted Mead for her 34th-minute strike as she became the second-joint highest scorer in a single women’s Euros.

She is also in the lead to win the tournament’s Golden Boot with six goals so far. Germany and France play in Milton Keynes tonight.