It’s September 2003, and former Socceroos defender Andy Bernal is sitting in a Porsche parked underneath a luxury Madrid hotel. 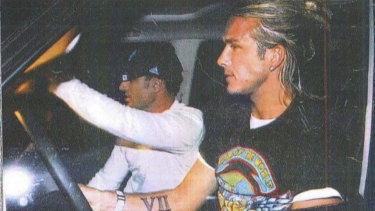 In the Porsche’s passenger seat is Louise Adams, Beckham’s sister-in-law and sister of Victoria Beckham, also known as Posh Spice. She’s playing Posh for the day.

Bernal and Adams will soon drive up to a Madrid street that’s crawling with paparazzi, and they’re in disguise to try fool the waiting press. They want to take photographers off the trail of the real “Becks and Posh”, who are driving to a nearby Hard Rock Cafe to celebrate their son, Romeo’s, birthday.

Bernal floors it out of the carpark and spins out the back wheels, but the waiting paparazzi breach hotel security, blocking the road, and the Porsche is jackknifed by another car.

The next thing Bernal remembers is feeling sore and dazed and getting pulled from the car and the paparazzi pack by members of Beckham’s security detail, which included ex-commandos and ex-Cuban intelligence officers. 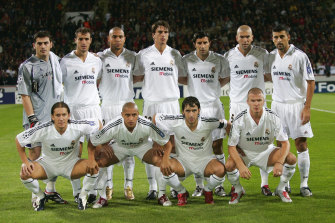 Beckham was part of the ‘Galacticos’ side at Real Madrid, which here includes Ronaldo, Luis Figo, Zinedine Zidane, Roberto Carlos, Raul and the England captain himself. Credit:Getty Images

“The paparazzi are ruthless,” Bernal says, noting he would regularly drive with Beckham while paparazzi lenses tapped on and cracked the windows of their car. “I believed most days there was a good chance I was going to die in a car crash with David Beckham.

“When you’re there it is exciting but you sit back at home after and think ‘I was a couple of inches from dying in a car crash’.

“I was out cold and then back to life … Unless a movie portrays it or you see it yourself it’s hard to believe. Fifty to 100 paparazzi on motorbikes, surrounding cars, the hotel. All revving engines. Spotters on every corner of Madrid with two-way radios.

“You lose them down one street but more appear, it is a real life video game. It was relentless. It didn’t stop.” 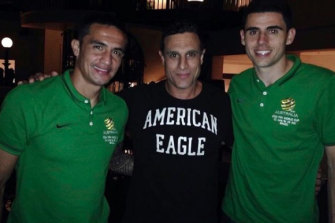 Bernal details this story, and many others, for the first time in Riding Shotgun: The Autobiography of the original Wizard of Oz, out on Tuesday.

At the time of the crash, England captain Beckham had just moved from Manchester United to Madrid in one of the most famous soccer transfers ever. Bernal had retired from his own soccer career in Europe and with the Socceroos and had become an agent with the company that managed Beckham.

Because Bernal could speak Spanish he became Beckham’s “agent, manager and bodyguard” as well as his translator. He writes in the book that British intelligence would often warn those close to Beckham that his sons, Brooklyn and Romeo, were kidnap targets in Spain.

“It was a particular time in world football where Beckham was a global superstar and on the back of the incident with ‘Fergie’ [a dressing room bust-up with Manchester United coach Sir Alex Ferguson],” Bernal said.

“He was married to a Spice Girl and he was going to a team that had Zinedine Zidane, Ronaldo [the Brazilian striker], Luis Figo and Roberto Carlos.

“It was life at its most glamorous and elite on a sporting level. The perfect storm.”

Bernal was basically out of a job in three months. Beckham switched management companies to the same firm that handled Posh’s affairs, and everyone from before that time was cut loose.

He returned to Reading to live with friends, but he quickly fell into drug addiction. During this time he got into trouble with the law and says he was getting offered millions of dollars to dish dirt on the Beckham family in the media.

“It’s not me. I couldn’t look in the mirror [if I had taken the money],” Bernal says.

“You start getting offered things but they only want one answer.

“It [working close to Beckham] took a toll on me. I hardly slept … I wasn’t trained for everything. I was an ex-player and an agent. It was ‘here you go Andy, here’s the keys to a £300 million empire, make sure no one dies.’”

Bernal, now 54, and past the torrid times of his life, wants to become more involved in Australian soccer. He currently manages a few “young, up-and-coming” players, and has managed Celtic and Socceroos star Tom Rogic and Australian legend Tim Cahill in the past. He says the process of writing the book was “cathartic”.

There is a severe lack of male Australian players at top European clubs. Among Bernal’s generation, he was one of many.

“I think we need more people involved that are able to give our youth the messages, information and knowledge required to play at the highest levels in Europe,” he says.

“It is just repetitive drills. There’s no imagination.”

Tags: and, Aussie’s, Little-known, rise
You may also like
Latest Posts