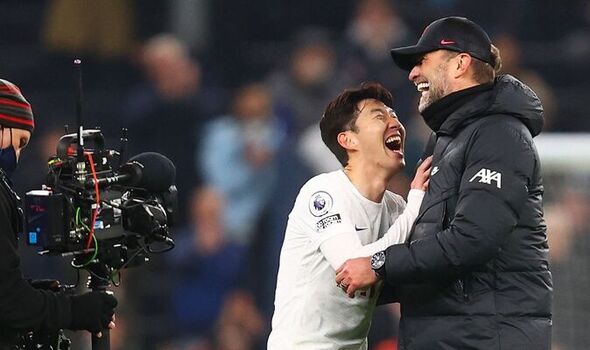 Jurgen Klopp has declared failing to sign Tottenham’s Son Heung-min was one of the “big mistakes” in his life after the South Korean international chose to join Bayer Leverkusen over his Borussia Dortmund side back in 2013. Daniel Levy moved to wrap up the £22million capture of the jet-heeled forward 41 days before the German tactician was appointed on Merseyside but to this date, the Liverpool boss has lived to rue missing out on the opportunity to work with a player he rates so highly.

He said: “One of the big mistakes in my life was that I didn’t sign him. Outstanding player. World-class player and one of the best strikers in the world. Yeah, you should be proud.”

Klopp has always made it clear on several occasions – stretching back to his time in the Bundesliga with Borussia Dortmund when he tried to sign Son – that he appreciates his qualities as a player and that has been evident during the many post-match embraces the duo have shared together.

The pair were spotted sharing a joke after the 2-2 draw between the two sides at the Tottenham Hotspur Stadium last December before they also enjoyed a moment together on the Anfield turf after the 1-1 draw on Merseyside last season – a game which technically cost Liverpool the title.

The Reds boss was overheard saying to the attacker: “Here is special!” in reference to the thunderous atmosphere inside Anfield.

During his time in the Bundesliga with Hamburg and Bayer Leverkusen, Son was branded the ‘BVB killer’ after netting for both clubs against Klopp’s Dortmund, who originally missed out on a deal to Bayer in 2013.

Son would later say: “I wanted to stay in the Bundesliga. Leverkusen and Dortmund wanted me. Both teams play in the Champions League but I thought Dortmund would use rotation more than Leverkusen. That’s why I chose Leverkusen over Dortmund. It’s really important to play regularly at my age.”

Somewhat surprisingly, Liverpool were linked with a shock transfer swoop for Son in the media this summer following the departure of modern-day Anfield great Sadio Mane, who joined Bundesliga champions Bayern Munich.

Son would have been the ideal replacement for the Senegal international but having signed a new long-term contract with Tottenham in July 2021, Spurs were never likely to entertain a sale unless an irresistible offer arrived on the table.

In recent weeks, there has been growing speculation over the future of the 30-year-old, who is said to be frustrated by Tottenham’s lack of progress in recent seasons.

There was widespread optimism that the appointment of Antonio Conte could prove to be a game-changer for the north London club but Spurs look on course for nothing more than another relentless battle for a top-four finish – despite an impressive start to the campaign on paper.

Klopp is confident that Son will be able to feature at the World Cup with South Korea after suffering four separate facial fractures in the 2-1 Champions League win over Marseille.

Son was forced to undergo surgery following the unfortunate clash that saw him exit the field in the first-half of the fiery encounter at the Stade Velodrome.

He is not expected to play again for Spurs until after the World Cup having sat out of the 2-1 defeat to Liverpool at the weekend.

Former Celtic, Swansea, Sunderland and Newcastle midfielder Ki Sung-yueng recently stated that his close friend Son is still hoping to participate in Qatar – even if it means wearing a mask.

The 33-year-old said: “I got in touch with him (after his surgery). He said he wants to play even while wearing a mask, showing his strong will.”

Tottenham travel to Nottingham Forest in Carabao Cup action on Wednesday before playing their final Premier League match before the mid-season break against Leeds on Saturday.