Liverpool could turn to signing Declan Rice one day sooner rather than later as a long-term successor to Jordan Henderson has been tipped. Several midfielders have been linked but the West Ham star might be the best option.

Liverpool must decide that signing Rice as a replacement for Henderson is their best course of action over anything either this transfer window or next.

That was the verdict from Danny Murphy earlier this year and those words have echoed into the summer amid links the West Ham star is looking to leave. Jurgen Klopp has been insistent that he does not need a replacement for Georginio Wijnaldum, who left for Paris Saint-Germain in 2021 on a free transfer.

Yet, while Henderson might still just be 32, in the near future there will come a time when the Liverpool captain will hang up his boots at Anfield. His departure will leave a major void in midfield, not just in quality but in leadership as well. 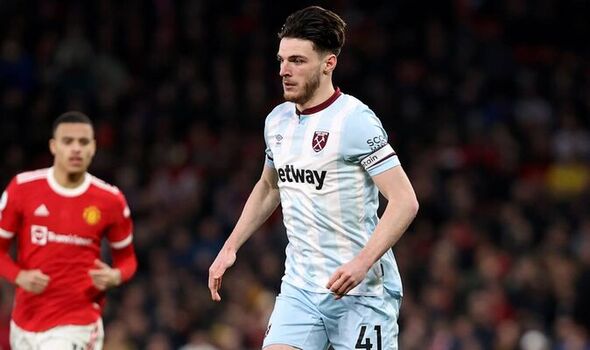 Klopp has been fantastic at bringing in players before his top stars leave, allowing for a period of settling in rather than being thrown straight into the fire. It has worked with Andy Robertson when Alberto Moreno was urged out of the team and appears to have been a masterstroke when Luis Diaz was signed in January as Sadio Mane departed for Bayern Munich earlier this summer.

It means that Klopp would rather have his Henderson replacement in the team before the England international has even decided whether he wants to leave or not. And Murphy reckons there is an easy answer over who should be the man to fill the gap.

He said in March: “I think if you’re looking for a Jordan Henderson replacement, then you need somebody who could be there for the next ten years. Rice is a super athlete; he can get box-to-box like Henderson and he leads others around him.

“He doesn’t have to play the holding role, but he could if Fabinho got injured, and I think he could become a great number eight in a better side.

“He’ll be able to get forward more and score goals which he has shown at times. I know he’ll be really expensive, and Liverpool won’t pay that sort of money. But if you’re asking me from a fan’s mindset and a pundit mindset, then if Liverpool were to only sign Declan Rice it would be a phenomenal signing. But as I say I think it would be unlikely.”

Whether Rice would want a move to Liverpool remains to be seen, though it would be difficult to envisage a situation where he turns them down. He has held off signing a new contract with West Ham to try push through a move to a Champions League team and there are fewer locations more attractive than Anfield right now.

However, the Englishman’s love for Chelsea is no secret having grown up down the road from the club, being in a family full of Blues fans and being on their books until he age of 14. If Thomas Tuchel entered the race for the midfielder, it might be too tempting for Rice to turn away from – despite Liverpool’s current scenario.