‘These are the games that really matter… we are now in a position to enjoy it’: Liverpool defender Trent Alexander-Arnold relishes talk of the quadruple with the Reds still in with the chance of the unprecedented feat

The question came around, as was inevitable. There is no talk within Liverpool’s dressing room of quadruples or clean sweeps but it all changes when cameras are rolling.

Can they win the lot? If they do, perhaps Mohamed Salah will find himself facing the microphones. As is his way, he turned down all requests to talk after a game but promised that if things go as they hope that might change.

Salah was in a playful mood and disappeared, so this time the responsibility to answer the questions fell to Trent Alexander-Arnold. As the right back stopped in Wembley’s tunnel, Jurgen Klopp walked behind him, black baseball cap pulled low, and he looked physically spent. 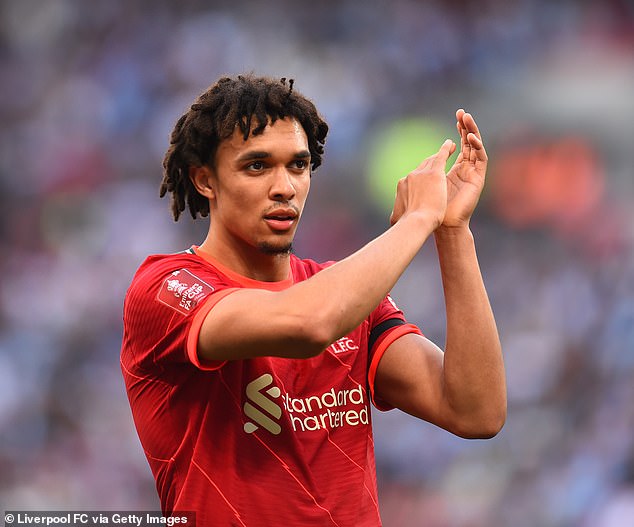 It made you wonder whether they are actually enjoying being in the middle of this pressure cooker: the constant scrutiny, the unrelenting threat that one slip and the chance to make history will be over. Is it possible to savour? Alexander-Arnold looked up and smiled. ‘Definitely!’ he responded.

He famously said he was ‘a normal lad from Liverpool whose dreams have just come true’ after playing in the 2019 Champions League final win over Tottenham and here was another example of unfiltered happiness.

Crucially, it came with a salient point.

The closer they get to the end of the campaign, the more the squad are aware of what is at stake. They may head into their summer holidays with just the Carabao Cup to show for their efforts but the opportunity to pursue what has previously been impossible is invigorating. 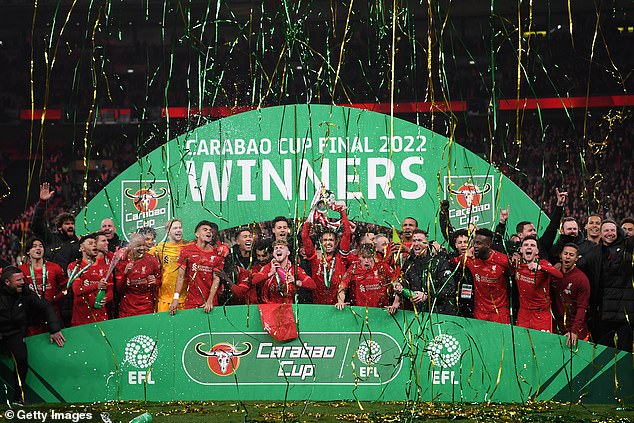 ‘This, personally, has always been the best time of the season, no matter what,’ Alexander-Arnold continued. ‘These are the games that really matter. You build your foundations, then over Christmas you sustain it and push through to March.

‘Once you come back from the internationals, it gets really tasty doesn’t it? The games matter, it’s the best time of year. We are now in a position to enjoy it and anyone who doesn’t — well, it’s a massive disappointment if you can’t enjoy it.

‘Hopefully it won’t be a once-in-a-lifetime opportunity but this is the first time we’ve been in this position.

‘To still be in with a shot of winning every trophy in the middle of April is outstanding. It shows the quality we have in the squad. It’s about making sure we sustain it for another month.’

Alexander-Arnold, who barely put a foot wrong in 95 absorbing minutes, was not the only man to promote that message. Virgil van Dijk knows how quickly fortunes can change, so why get uptight about a situation they have worked all their lives to be in? 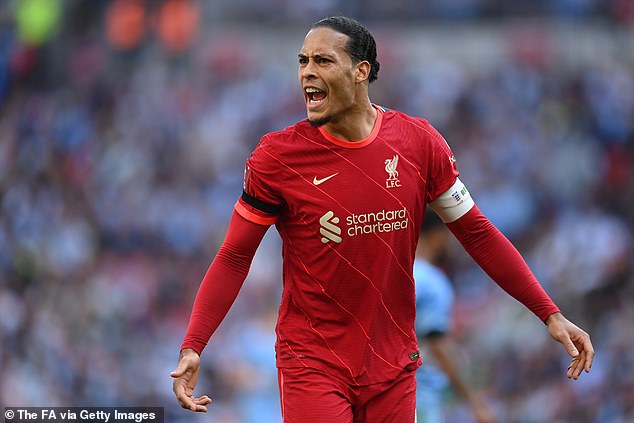 ‘It’s quite special what is going on,’ said Van Dijk. ‘Hopefully we will all remember these times in 10-20 years. All this talk about quadruple or treble is from the outside and could put extra pressure on us.

‘Nobody did the quadruple. There’s a reason — it’s almost impossible. We’re in a good moment, we got to the final now for a trophy we haven’t won as a group. So we will see. We are focused now on getting ready for Manchester United (tomorrow) because that’s going to be a tough game.’

Anyone who thinks differently is not realistic. Everything is tough from here. This is like the final stage of a long-distance run when your muscles are screaming and your mind has the potential to wander, as tiredness wraps around you like a cloak.

The thought of what it will be like at the finish is what powers you through and, for Liverpool, the opportunity is enormous. They may have plodded across the line against City, to reach their first FA Cup final in a decade, but do not forget what had happened as they raced into a 3-0 lead.

‘We pressed them high, we won the ball back when we lost it and, in that first half, I don’t think I have known a team to run over City as we did,’ said Alexander-Arnold. ‘They are a different breed to anything else in the world and we were outstanding.’

The task now is to maintain those levels for the next 40 days.